When the Forward was in the vaccine business 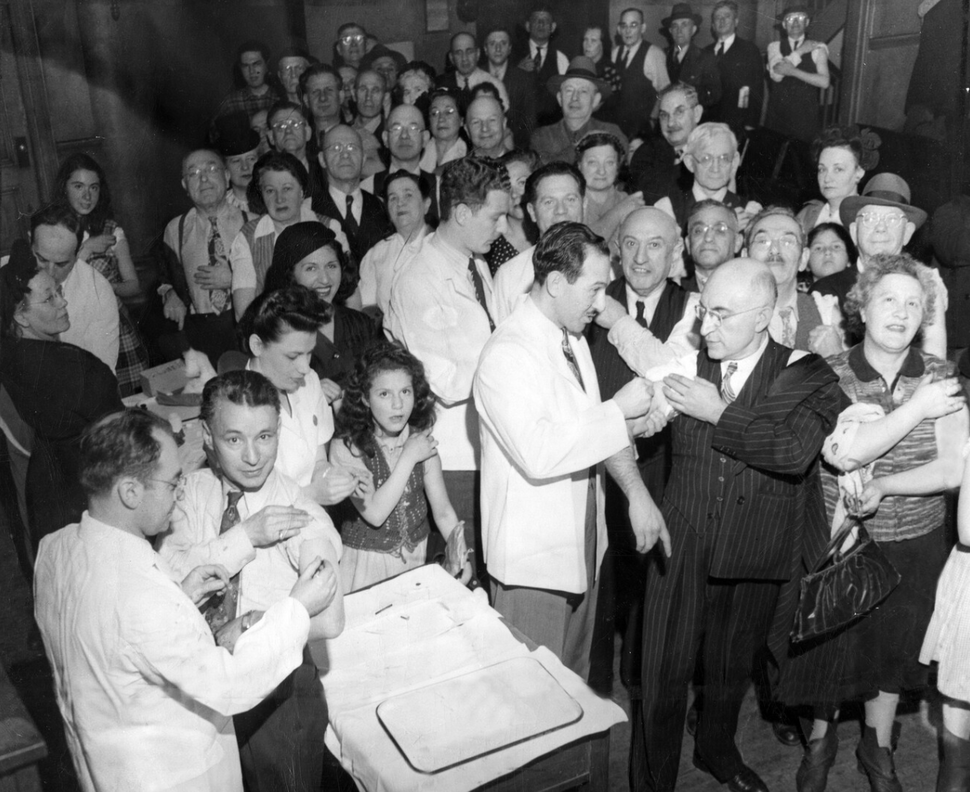 Workers Circle Members gather at the Forward Building to get smallpox vaccinations in the spring of 1947. Photo by Forward Archives

In April of 1947, readers of this publication flocked en masse to our building at 175 E. Broadway, rolled up their sleeves, and got stuck with a vaccine.

The scene, replete with bespectacled gents, women in house dresses and young children, was part of something bigger: a rapid, mass vaccination against smallpox. By the time the first two weeks of the effort were over, 5 million New Yorkers had been inoculated thanks to the city’s new health commissioner, Dr. Israel Weinstein, and his rapid response; Mayor William O’Dwyer’s expediting of vaccine supplies; and the millions of residents who queued up, rain and shine, to fend off the deadly disease. 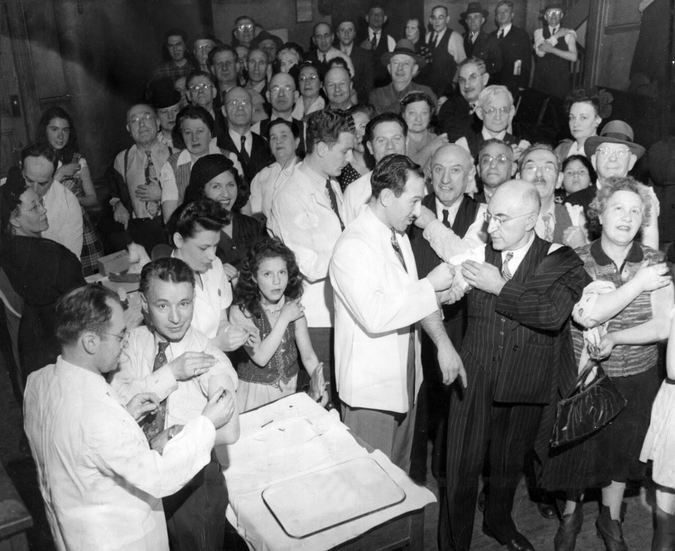 Workers Circle Members gather at the Forward Building to get smallpox vaccinations in the spring of 1947. Photo by Forward Archives

On April 6, two days after Weinstein confirmed that at least three New Yorkers had contracted smallpox, the Forverts made its first mention of the outbreak, explaining how a returning resident brought the disease with him from a trip in Mexico City, infected two others and later died. It also outlined Weinstein’s plan for mass vaccinations, a push the paper and its partner social justice organization played no small part in executing.

The New York Times recently reported that Weinstein sourced 250,000 units of the vaccine locally, from a naval medical depot in Brooklyn, and had 780,000 more flown in from military bases in California and Missouri. Coming up short, he bought a couple million more from private manufacturers and started tracing the disease’s progress. He then made radio addresses, speaking candidly of the disease’s risks and the necessity of vaccinations.

Weinstein had a willing partner in Mayor O’Dwyer, who appeared beneath the fold in an April 14 edition of the Forverts receiving a personal shot from the health commissioner, a heavily publicized photo op to boost public confidence. For its part, this paper published medical explanations from doctors and continued to encourage its readers to trust the science and protect themselves and others. 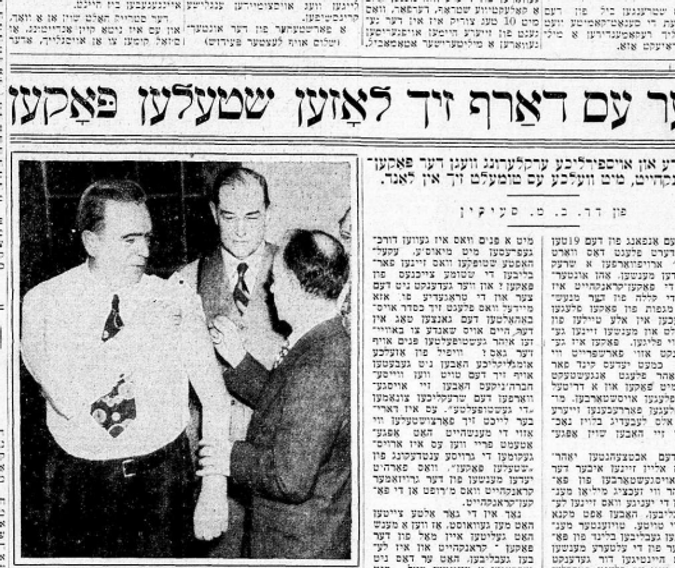 The front page of the Forverts on April 14, 1947, showing Health Commissioner Israel Weinstein administering a shot to Mayor William O’Dwyer. Photo by the Forward archive

On April 15, the paper directly addressed members of the Workers Circle — then called the Workmen’s Circle — a social justice organization that shared leadership with the Forverts. It told them to get vaccinated, and called on member doctors to vaccinate others for $1 a pop.

The article shows just how sweeping the vaccination initiative was, explaining that police stations, health department centers and clinics would begin distribution on April 16. In the meantime, Weinstein was promising 5 million more units of the vaccine in the next 10 days. Air raid wardens were instructed to go door to door to urge people to get their shots. 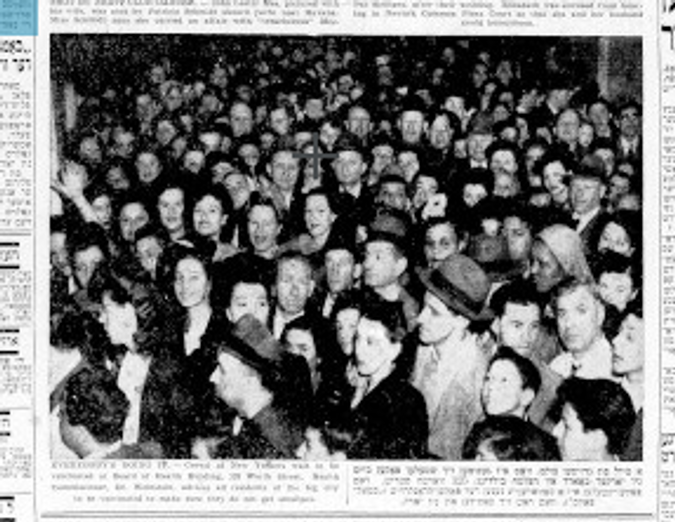 An image from the Forverts on April 15, 1947 shows a crowd gathering to be vaccinated. The text alongside reads “Attention Workmen’s Circle members! You are encouraged to get the smallpox vaccination. All Workmen’s Circle doctors are instructed to vaccinate members at $1 a pop.” Photo by the Forward archive

For their inoculations, many readers of the Forverts could rely on the Workmen’s Circle’s medical department, founded by a lawyer (not a doctor) named Samuel Koner in 1919. Given the overlap between the two organizations, the Forverts had a de facto medical wing. Member doctors of all stripes and specialities were located throughout New York City, and a clinic ran out of the Forward building before it moved to Union Square in the ‘50s and then to 33rd Street in 1972 along with the Workmen’s Circle and the paper.

The program ended in the mid-1990s when insurance companies stopped paying enough doctors to keep the clinic going.

“The system made very little sense anymore,” said Robert Kaplan, former executive director of the Workmen’s Circle, who closed the department down. “They were really top doctors, so even after this disappeared, we would still look for recommendations for someone who had been a Workmen’s Circle doctor.”

Even after Kaplan ended the clinic, the doctors were still involved with taking care of their patients from the Circle. They weren’t in it for the money, he insisted.

“They were in it because they believed individuals should get medical services,” Kaplan said. “It’s a right and not a luxury.”

Currently the branch of the Workers Circle dedicated to what Kaplan called “benefits” only survives in burial services. But in 1947, the fraternal spirit of the organization, with its socially progressive Yiddishkeit, afforded members easy and accessible health care — and instilled in them a desire to do their part for public health.

I asked Kaplan if Dr. Weinstein, a dedicated, Jewish public servant, and son of Eastern European immigrants who settled on the Lower East Side, was perhaps a member of the Workmen’s Circle.

“I will give you a good bet that he was,” Kaplan said.

When the Forward was in the vaccine business