When The Forward sponsored summer camp 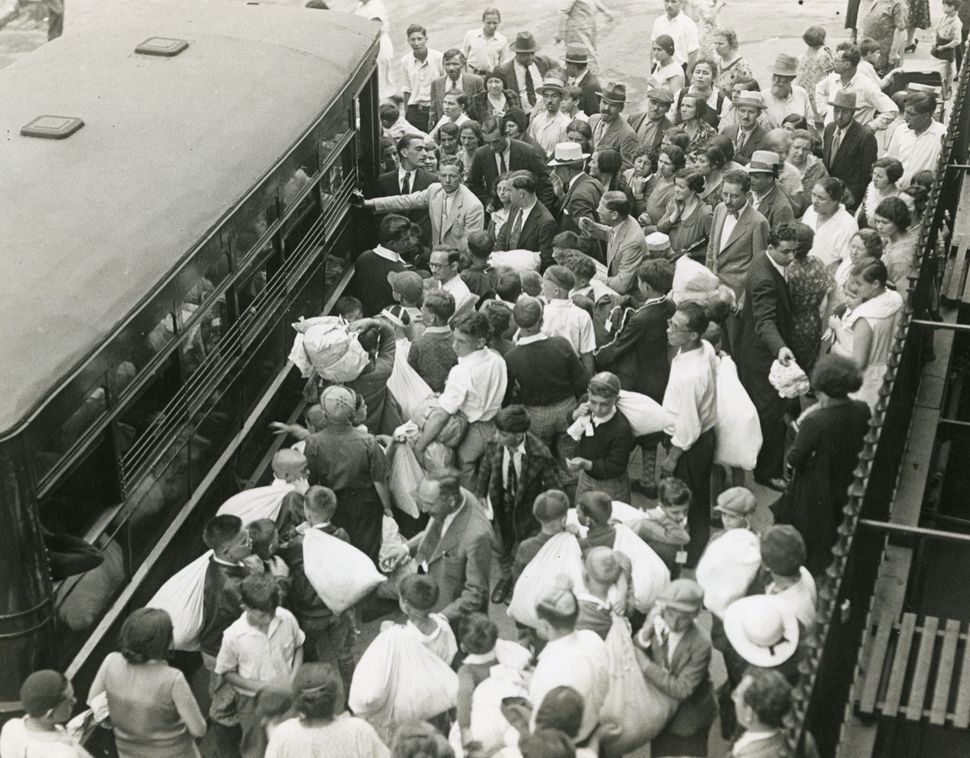 The Forward is one of 57 libraries, museums and city agencies, contributing to a new app called Urban Archive, helping make historical materials engaging and accessible. This week, we invite you to read all about summer camp. Jewish Americans have a long history of sending their children to camp and The Forward has always been a part of that tradition. Not only did the paper regularly run stories and photos from camp, but The Forward Association actually sponsored some camps and helped raise funds for others. For more, check out our Urban Archive collection.

Camp Vacamas, started in 1924, is a sleepaway camp for poor kids from the tenements originally located Upstate in the Catskills, in Kingston, N.Y. Founded by several Jewish organizations, including The Forward, the name is an acronym for the East Side Vacation Camp Association. The camp is now located in West Milford, N.J. and is still called Camp Vacamas.

This photo, which was captioned “Kids leaving the Educational Alliance for Camp Vacamas,” ran in The Forward in 1931.

In August 1924, when Camp Vacamas had its inaugural season, the city was experiencing a five-day heatwave with temperatures reaching nearly 100 degrees. The front page of The Forward told of five heat-related deaths, and of workers passing out on the job. But the illustrated art section also featured a full page of photos of the first group of Vacamas campers enjoying some much-needed rest and recuperation from their stifling tenements. 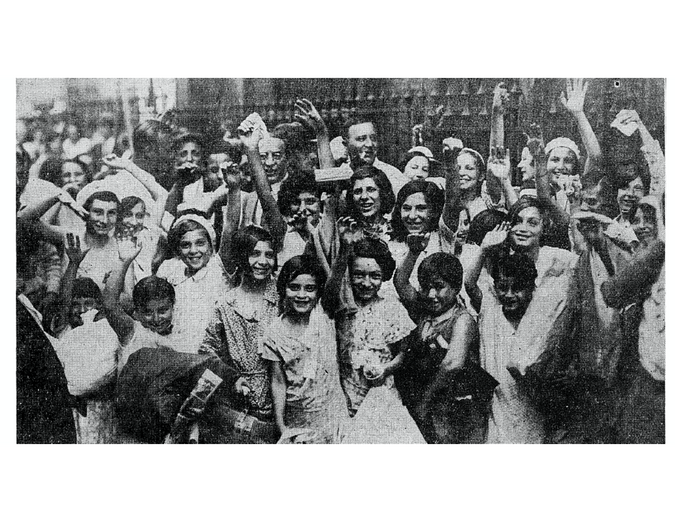 Photos showed the campers learning to swim, and had a caption reading, “When these five children arrived at camp, two were so run down in health that they had to be sent to a hospital for several days. The doctor advised an extra week of rest for them and they were kept three weeks at the camp, instead of the usual two weeks.”

The camp was funded in part by the generosity of Forward readers who responded to The Forward’s appeal for donations to The Forward Vacation Fund.

A typical caption for photos from Vacamas was “Where The Children of New York’s Needy Enjoy A Summer Vacation.” Captions also emphasized the kids were “Safe and Happy.”

To fundraise for Camp Vacamas, aside from soliciting donations in the paper, The Forward also supported a theatrical revue called: The Forverts Vacation Follies. In August 1939, these were held at The Yiddish Art Theatre at 932 7th Avenue. It promised a night of massive entertainment with drama, humor, music, song and dance, with a special feature of a movie showing the best of last year’s follies. The Forward Follies ad noted that funds raised by the event would be used to help subsidize the cost of sending hundreds of children to camp for two weeks. Over fifty top artists from both Yiddish and mainstream theatre performed, including Rosemari Brancato, Jan Peerce, Maurice Shwartz, Sholem Secunda and more. Tickets prices ranged between $1-$3 and were available for purchase at The Forward office. The Forward Vacation Fund fundraiser for Camp Vacamas poster from August 1939, held at The Yiddish Art Theatre at 932 7th Avenue. It promised a night of massive entertainment with drama, humor, music, song and dance. Image by The Forward

Sophie Tucker, among those billed as a performer at the Forward Vacation Follies, was a famous Jewish actress, singer and comedian, nicknamed “The Last of the Red Hot Mamas.” Tucker, who frequently peppered her racy songs with Yiddish bits, was born in Ukraine but moved to Boston with her family as a baby. She went on to perform in vaudeville and eventually even had her own radio show.

In July 1931, the front page of The Forward featured a delightful fundraising pitch whose headline cited a popular Yiddish song about kids playing beneath the shade back home in the old country. The song, “Under The Little Green Trees,” was written by Jewish national Hebrew bard Hayim Nachman Bialik and had great appeal to those immigrants laboring away in America, with little leisure time nor simple pleasures in sight.

“Remember this old song?” The Forward pitched readers. “Those kids were out playing in nature, but the children of the poor in this country, in the vast metropolis of New York, don’t have that option. These impoverished children don’t have access to fresh air or nourishing food. They aren’t able to grow into healthy productive citizens. Many of them, with your help, can have this opportunity if you donate to The Forward Vacation Fund.”

The camp and the fundraising survived the war and its losses, and as late as 1947, with the Holocaust and World War II at an end, The Forward published its annual pitches for summer relief. It made special note of the workers at a local manufacturing shop who had gathered a collection from their earnings in support of sending the kids to the country. Avrom From wrote this note along with his donation: “I’ve gathered this together at Breihaltz Brothers Fur Shop. It’s five dollars and fifty cents for the Vacation Fund. We support this important fund and hope workers at other shops will follow this good example in order for more children of the working class and poor to be sent to the country for fresh air they so badly need.”

In 1930, The Forward’s first English supplement ran a full-page article on the Educational Alliance’s art school, located at the University Settlement on Eldridge Street near Rivington. Citing the Alliance’s support for Jewish immigrants, the article highlighted the art school’s founder, artist Abbo Ostrovsky — himself an immigrant who literally, per The Forward, recruited his first students off the sidewalks of the Lower East Side. Having begun with a mere handful of art students, by 1930 The Forward reported registration for the school to be 150, with ages ranging from 7 to 50.

There was crossover among staffers of the Educational Alliance, a Lower East Side non-profit, and Camp Vacamas.

In 1939, as war loomed in Eastern Europe and the fate of Jews there was being determined, a cottage at the camp was named for Forward General Manager B. C. Vladeck, a major supporter of the camp and City Council member, who had died the year before.

The original caption from 1931 read: “OUT FOR A GOOD TIME-Boys leaving the Educational Alliance yesterday for Camp Vacamas supported by Forward Vacation Fund.” Image by The Forward

Born in Minsk in 1886, Baruch Charney Vladeck moved to New York as a young adult and became a labor leader. He was active in city government, helping to establish public housing for low-income residents. A Lower East Side housing project, the Vladek Houses, was named for him after his death.

The Educational Alliance was a sponsor of Camp Vacamas. It was founded by Jewish philanthropists in 1889 as a settlement house for Eastern European Jews immigrating to New York City. The organization offered classes in English, stenography and other practical topics useful to new Americans.

Besides Camp Vacamas, the Educational Alliance funded other camps in the region, including Surprise Lake Camp for Boys in 1900, Edalia Vacation Home for Girls in Rumson, N.J. in 1915 and Camp Salomon in 1922, which became a camp for older adults in 1958.

In 1931, as early as June, The Forward’s front page published instructions for working-class parents to sign their kids up for some quality time in the country. “Today between 8 and 9 p.m., registration begins for working-class and poor children. Registration takes place at the Education Alliance on East Broadway and Jefferson Streets.” The Forward’s pitch stressed that children would gain the ability to work on their growth and development for their entire future by being in the country. Who could resist? “If you’ve got a human heart,” they persisted, “you’ve got to donate to The Forward Vacation Fund.”

A July 1939, photo in The Forward told of “200 of the poorest children sent by the Education Alliance for a vacation in Camp Vacamas.” The Forward further noted the children were able to go for a brief vacation through the assistance of The Forward and its readership, who had contributed to the Vacation Fund.

The original caption from 1939 read: “SAFE FROM STREET ACCIDENTS AND THE STIFLING HEAT-Some of the happy youngsters at Camp Vacamas, near Kingston, where many of New York’s underprivileged children enjoy a holiday from the sweltering city each summer through contributions to the Forward Vacation Fund.” Image by The Forward

However, before the 1930s, there were very few outdoor pools in New York, perhaps making summer camp even more appealing for the opportunity to swim on hot days.

Today many of the summer camps founded in the 1920s and 30s are still in operation. In 2020, after much debate, many of them were forced to temporarily close due to the coronavirus pandemic. They hope to reopen in the summer of 2021 to continue the tradition of fun, community and summer freedom.

When The Forward sponsored summer camp