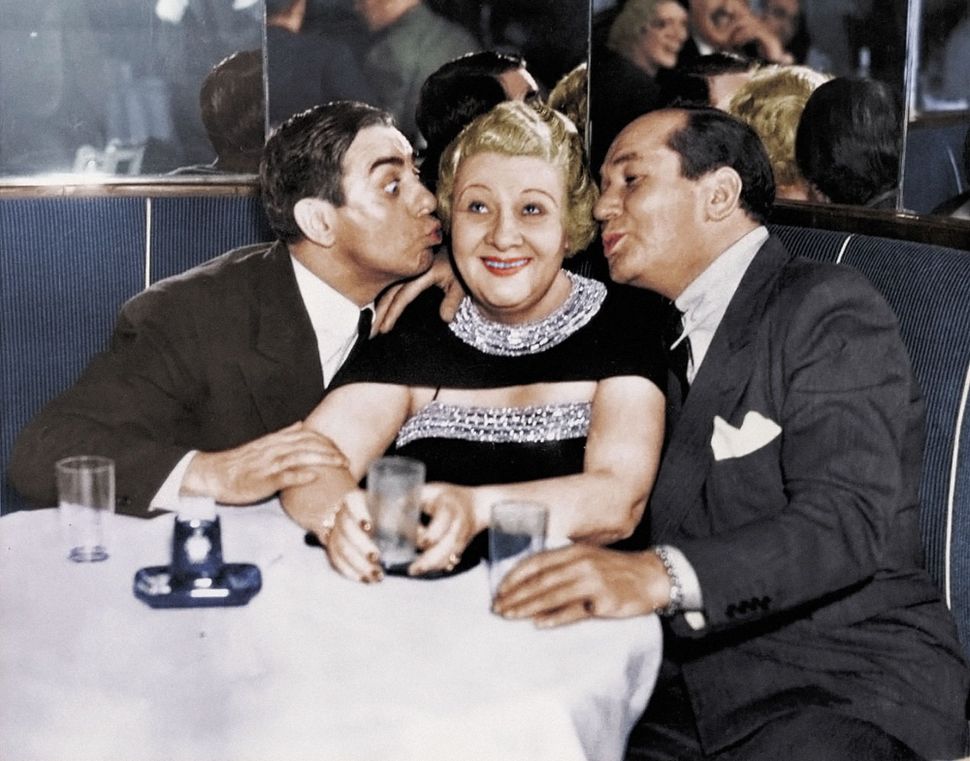 Sophie Tucker used to open her act by saying her career dated back to the days when the Dead Sea was just sick.

That, of course, is a slight exaggeration. But from around 1907 almost until her death in 1966, the ribald Tucker was the Madonna of her time. Today, in an age when fame is as disposable as yesterday’s newspaper, she is largely forgotten.

That may change, thanks in part to “The Outrageous Sophie Tucker,” a fascinating bio-doc about the brash, larger-than-life entertainer known as “the last of the red-hot mamas.”

The project was driven largely by producers Susan and Lloyd Ecker, who became obsessed with Tucker. In 2006, after selling their business, they traveled the country interviewing the singer’s family, friends and colleagues. They were aided by the fact that Tucker was a memorabilia hoarder who kept 400 scrapbooks filled with letters, photos and assorted reminiscences.

These provided enough material not only for the film — for which they do most of the narration — but also for a book, “I Am Sophie Tucker,” which is described as a “fictional memoir.”

Tucker was born Sonya Kalish while her family was en route from their native Ukraine to the United States. They settled in Hartford, Connecticut, where they opened a kosher restaurant. It was there she first experienced show biz, while singing for tips.

After the first of three unsuccessful marriages — this at age 16 to Louis Tuck, who provided her stage name — Tucker moved to New York. She started out in cafes and worked briefly for the Ziegfeld Follies and in vaudeville, while slowly developing her persona: part singer, part risqué comic and part self-deprecating lady of large proportions.

Songs like “I Don’t Want to be Thin” and “Nobody Loves a Fat Girl, But Oh How a Fat Girl Can Love” became regular parts of her act.

Her first big hit came in 1911, “Some of These Days.” It was the song she would be associated with for the rest of her career. Another Tucker classic was “My Yiddishe Mama,” a song she’d perform partly in Yiddish and almost always in venues where she was certain a large percentage of the audience would understand her.

Kudos to the Eckers, who conducted about eight years of research and happily and successfully translated their findings to the screen. There is no writing credit in the production notes, but presumably the script is theirs. Moreover, they traveled the country and personally filmed those few artists old enough to have known or have known of her. These include Carol Channing, on whom she was a great influence, Tony Bennett and comedian Shecky Greene. Interestingly, the only person they didn’t corral was Bette Midler, who continues to tell Sophie Tucker jokes and even named her daughter Sophie in Tucker’s honor.

The Eckers also found a vast trove of archival footage of entertainers, many sadly deceased, who appeared with or discuss her, including Eddie Cantor, Joe Franklin and Mickey Rooney.

Special praise, also, to director William Gazecki, who managed to put these disparate elements together in a near seamless manner. He also added intriguing special effects that make even still photos come alive.

The result is far more than the typically dry bio. Audiences get a feel for the person Tucker was. Far from aloof, she was friendly to all and knew everyone, from Al Capone to J. Edgar Hoover. In fact, according to one relative, the FBI director, supposedly a cross dresser, asked her: “Soph, when you’re done with that dress, can I have it?”

And they all seemed to like her. Brenda Lee recalls being booked on the same Ed Sullivan Show with Tucker, and how Sophie came over and engaged her in conversation.

Tucker was also loyal. Ted Shapiro was her pianist for 40 years. William Morris, a theater owner who booked her early in her career and later founded the William Morris Agency, was her only agent, an arrangement formalized only with a handshake.

When there were bomb threats against black singer Josephine Baker, who was going to open at a Miami nightclub, Tucker went there to introduce her.

The over-the-top singers now — Madonna, Lady Gaga and Bette — are just pale imitations. Can you imagine any of them inviting soldiers serving in combat to write them the way Tucker did in 1942? She really was the very last of the red hot mamas, and this documentary is a fitting tribute.