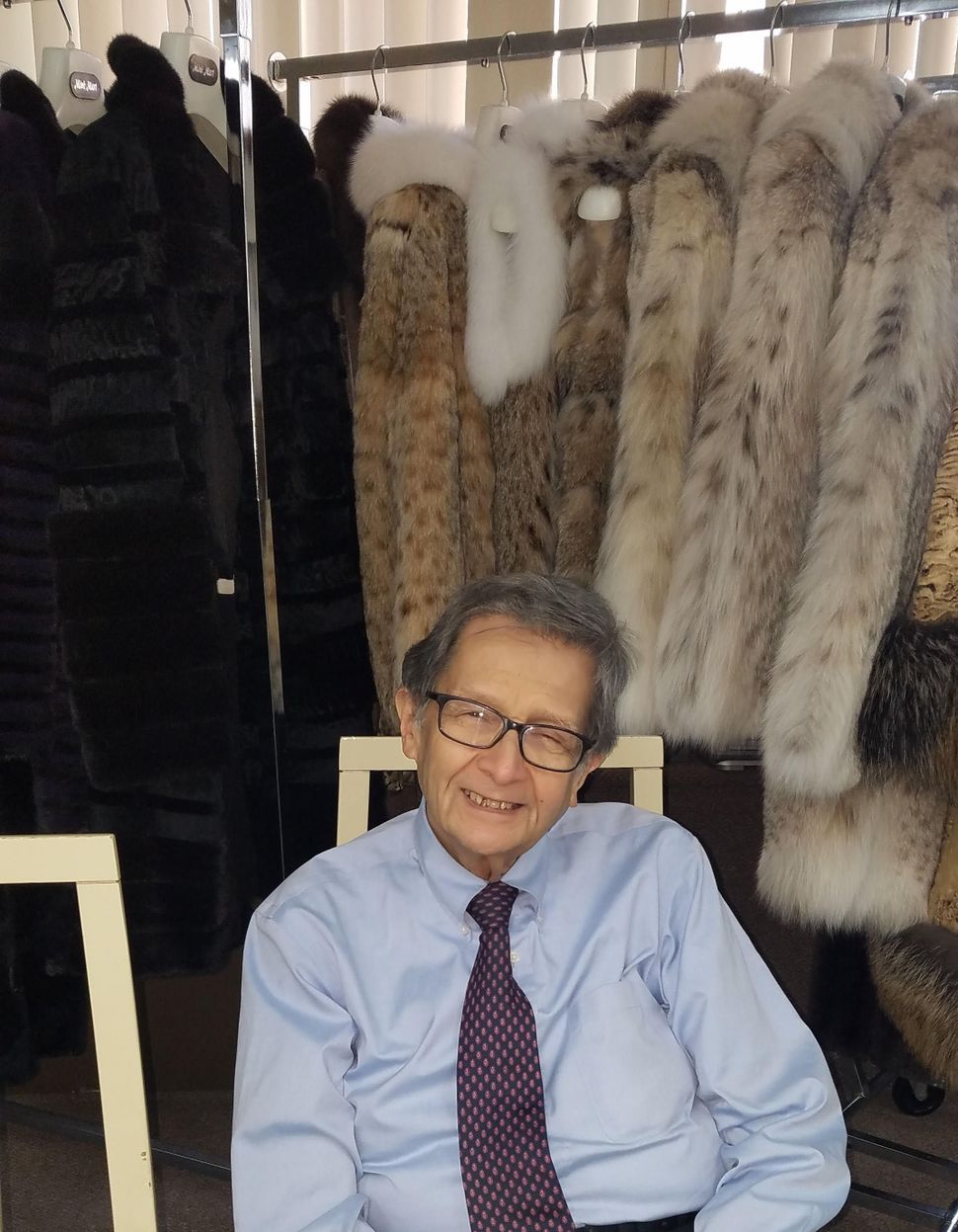 Every morning, Leonard Kahn takes the Q train around the corner from the Upper East Side apartment that he shares with his wife Talia, rides it down to the 34th Street/Herald Square stop and walks the two blocks to Mink Mart, where he works as a furrier. On his way home at night, he stops by Hunter College to attend classes (economics, poli-sci, immigration, religious experience and anything he can “get his hands on”) then heads back to the apartment, has dinner at 10:15pm and finally goes to the gym around 11:30pm.

Born in the Bronx in 1928, Kahn sold furs to the likes of Elizabeth Taylor and Amir of Kuwait.

When he started out as a furrier, there were about 500 working furriers in the city. Today, there are less than 100. Clearly, the job of a furrier is a particular one, demanding the kind of precision and attention to a customer’s requests that only extremely patient individuals who tend to the work because of a deep-rooted passion, and not just financial necessity, can excel at.

“We do everything from buying the skins to producing the garment to satisfying the client with the best product possible,” he says.

As soon as I enter his fur-filled store, Kahn delves into the kinds of stories that nudge you out of the comfort of a 21st century existence – and establishes his connection to this very publication.

“When [my father] came here [from Russia], he was 21 so my aunt—the wife of my uncle—decided he was going to fix him up with a date. He didn’t speak any English, he was here ten days. She fixed him up with a girl who didn’t speak any Yiddish,” he recounts while sitting at a glass table in the middle of the store. “I don’t know where they were going but they were on the subway and, my father and this girl go on the subway, they couldn’t talk to each other but my father wanted to show her that he was part of the intellectual [crowd] and he took the Forward out and started to read it. When he looked up at the next station, she was gone!” 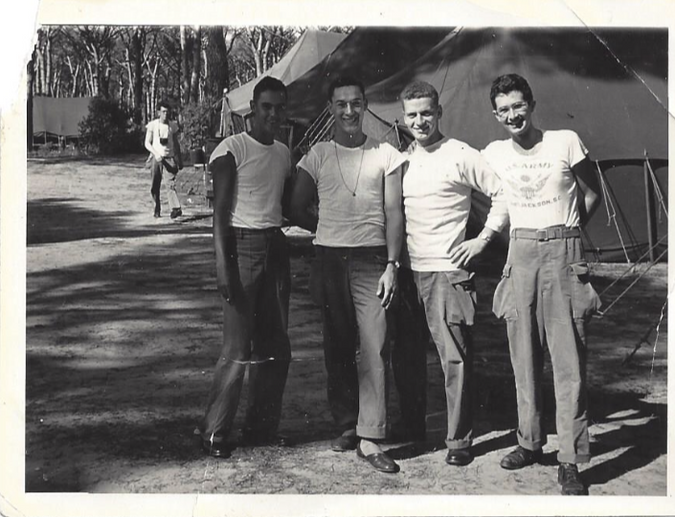 Leonard Kahn, right, with fellow US army buddies in 1952.

Here, he bursts out in a contagious fit of laughter, the first sign that his story isn’t meant to convey a life-changing moral but is instead delivered to incite a genuine smile.

“She was ashamed that he was reading a Jewish paper!”

That’s what an hour with Kahn looks like — an endless recounting of memories that assume the air of mythic tales but unfailingly wrap up punch lines which might really be his secret to a long life: just laugh it out.

Take his proposal to Talia, which he settled on after meeting her six times and spending a single week with her in Paris: “I was 30 at the time and she was 19-and-a-half. I was looking for a romantic spot to propose and there was at one time [this] park [in Israel] near the water. I sat down and every time I wanted to open my mouth, people walked past and I found out I proposed in front of the only public toilet. So I always said, ‘It’s a sign!’”

Belonging to one of the fur business’ most renowned Jewish families and having lived through World War II also bring along a set of dramatic memories. Of course as an American that was drafted in the U.S. army, he was aware of what was happening to his fellow Jews in Europe in the 1940s.

What prevented him and his family from moving to Israel as soon as the war was over? “We were real, and we still are real Americans,” he says confidently. He did, eventually, turn his attention toward Israel. “I was in the American army, it was during the Korean War but I was lucky,” he remembers. “I was originally sent to Germany but I never got there. I was picked to go to Italy and I spent a year and a half [there]. Toward the end, my father said to me ‘Why don’t you go to Israel?’ It was 1953. ‘You will find survivors of the Holocaust.’ I did.” There, he met Talia.

“I was married in Israel on [Talia’s] grandfather’s farm and they put a top over the chicken coop but you could hear [the animals] in the background,” he reminisces. “When I was there I said to one of my wife’s friends ‘What am I supposed to do?’ He said, ‘When you step on the glass, yell out Shema Yisrael three times!’ And so I did it.”

The marriage resulted in three children and eight grandchildren. Kahn grabs a photo of them and spends tens minutes exuding their praises and listing each one’s achievements in mind-bogglingly specific detail.

Given the fact that Kahn once used to make furs for the Iranian Shah’s wife—one of many other renowned figures he has worked with throughout his career—his overall down-to-earth attitude is welcomingly peculiar. But maybe that is the secret to Kahn’s longevity: Exploiting all of life’s experiences without dwelling on the past too much. 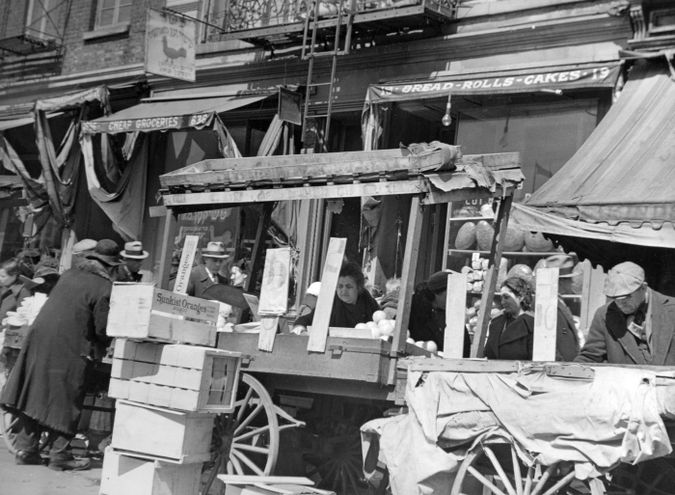 Scenes from the Lower East Side, circa 1920s-30s Image by Forward Association

Not even a discussion about this president — the 16th one that Kahn is experiencing — seems to shake Kahn’s balance. “He has got a tremendous ego, which is stopping him, [but] he is doing some things that I approve of, as far as Israel is concerned. Who knows what’s going to happen?” He said. “I always have Israel [in the back of my mind] and I think that he’s a better choice than Hillary as far as that’s concerned. I don’t know if I would vote for him if he ran again, it depends who he runs against. Very difficult.”

While time ticks away and as his co-workers start filing in (“She’s interviewing me!” he announces excitedly as one walks by), things wrap up with the positing of the one question that has been left unspoken since first setting up our meeting.

Smiling in what I now understand to be his signature manner, Kahn responds: “When God retires me, I’m going to retire.”

Anna Ben Yehuda is a writer and editor living in New York. Her words have appeared in Time Out, Playboy, StyleCaster and more. Follow her on Twitter @annabenyehuda.