She sometimes writes for the Forward.

Eighteen Solutions to the Israeli-Palestinian Conflict

How many ways are there to solve the Israeli-Palestinian conflict? Given that none so far have definitively worked, the number doesn’t seem high. But in a new anthology, “United States of Palestine — Israel” (Sternberg Press, 2011) a group of Israeli, Palestinian and European left-wing writers and artists present no less than 18 solutions to the conflict. 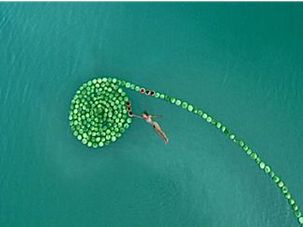 ‘DeadSee,’ by Sigalit Landau. Courtesy of the artist and Kamel Mennour Gallery.

Lucette Lagnado, a former editor at the Forward and currently a reporter for The Wall Street Journal, recently took it upon herself to unearth the full details of her family’s 1962 exodus from Egypt. The resulting book, “The Man in the White Sharkskin Suit” (Ecco), tells the story of a family torn from its beloved city of Cairo and forced to build a new life in America — a task that proved more difficult than expected.

On an auspicious day in the late 1980s, New York-based photographer Joan Roth decided to visit Bukhara in the former Soviet Union to photograph the centuries-old Jewish community there. The community’s relative isolation from the greater Jewish world and their constant and historic struggle against Muslim oppression had resulted in a unique set of traditions: They spoke a dialect of the Tajik language, their rituals stem from both Persian and Sephardic Jewish practices, and their clothing, silk gowns and caftans reflect the styles of their neighbors and rulers.

How One City Gal Found Faith — and Herself

With candor, poignancy and a hint of neurosis, writer Jennifer Anne Moses recounts the past 12 years of her life in Louisiana in her new memoir, “Bagels and Grits.” The product of a privileged Washington, D.C., upbringing — complete with ski vacations, private schools and a second house in Maine — Moses, a self-proclaimed East Coast liberal, gives readers a window into how a move to the heart of the South changed her life.

If you’re not the type of person to crack open a bottle of grape juice, light candles and bake a challah this Friday night, consider spending Sabbath eve with a fellow Jew, Isaac Mizrahi. Best known for his fashion designs (including his well-publicized line at Target), Mizrahi is a graduate of New York’s High School of Performing Arts (now the Fiorello H. LaGuardia High School of Music & Art and Performing Arts) and is reliving those “Fame” acting days most Fridays this month with a shmoozey-cabaret variety show at Joe’s Pub in Manhattan.

An exhibit at the New York campus of Hebrew Union College-Jewish Institute of Religion shows Hollywood movie posters from the Holocaust era. The posters, part of lawyer Ken Sutak’s personal collection, offer a glimpse into the Hollywood of the 1930s and ’40s, revealing how the film industry independently went to war against the Nazis starting in 1935 — six years before the United States.

Israeli photographer Adi Nes began his latest series, Biblical Stories, at a moment of crisis in his own life. “I just ended a long-term relationship; I was alone with no money, no apartment, no job. The economic situation was very bad in Israel; most of my friends were unemployed. Also, my father passed away,” he said in an interview with the Forward. “I chose the Bible as a framework for this series because, at a time when everything was breaking apart, I was looking for my roots.”

Filmmaker Dan Katzir is the last person anyone would expect to fall in love with Yiddish.

Queens College, part of the City University of New York, recently announced the endowment of a professorship focusing on Holocaust studies. And the man responsible for funding the position, 93-year-old William Ungar, knows about the Holocaust firsthand. Ungar, who grew up in Poland, survived a concentration camp but lost much of his family, including his first wife and son, to the Nazis.