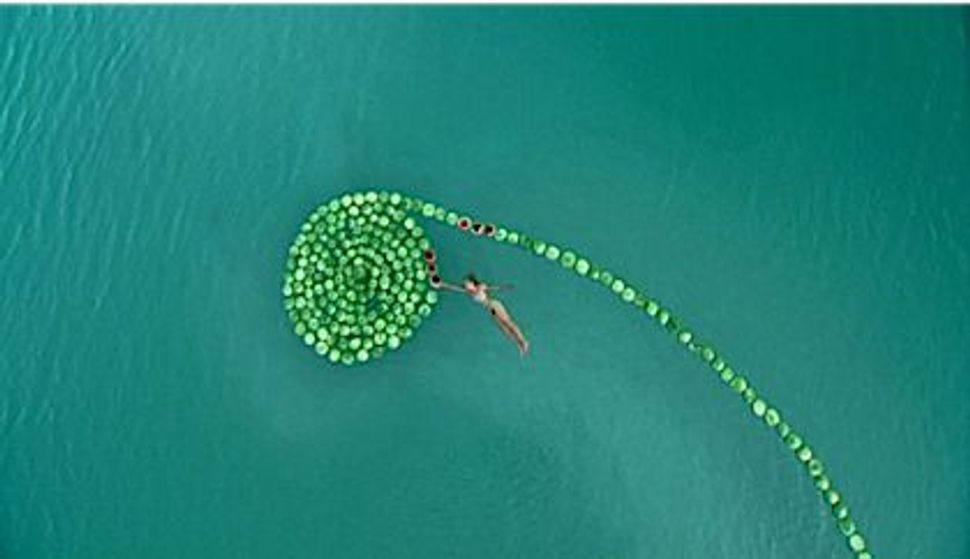 ‘DeadSee,’ by Sigalit Landau. Courtesy of the artist and Kamel Mennour Gallery.

While pavilions at the Venice Biennale are typically shrouded in secrecy in the months approaching one of the art world’s biggest events, the content of Israel’s pavilion this year is under especially opaque wraps. In June, Israel will be represented by 42-year-old artist Sigalit Landau, who is prone to keeping mum about her work. But in an event held last March at Sotheby’s auction house on the Upper East Side of Manhattan, Landau sat down with one of her curators, Jean de Loisy (the other is Ilan Wizgan), to speak about her concept, “One Man’s Floor Is Another Man’s Feelings.” The event was sponsored by Artis Contemporary Israeli Art Fund and by Kamel Mennour Gallery, which represents Landau in Paris.

Though the project was still in formation at the time, we can report that Landau will address the situation in the Middle East while putting it in a larger perspective; de Loisy put it as “speaking of the local, dealing with the universal.” Using water as an overarching metaphor, as well as salt and land, Landau will discuss coexistence and interdependence, reflecting on Israel’s close proximity to its neighbors. She also seemed to be interested in pre-state settlement activity.

The pavilion is housed in a three-level building that was designed in 1952 by architect Zeev Rechter. It was revealed that Landau will grow something on the site. Toward the end of their talk, Landau showed pictures of a bridge she is proposing to construct between Jordan and Israel, out of salt. She has made use of the Dead Sea in past projects, allowing chunky white salt crystals to form on objects such as lampshades, as well as videos of her floating. Of “Salt Crystal Dead Sea Bridge,” which she has put forward to both countries, she remarked, “The role of the artist is to create bridges, not walls.”

Landau is no stranger to the Biennale; her art was in 1997’s international exhibition alongside that of Miriam Cabessa and Yossi Berger. Born in Jerusalem and based in Tel Aviv, Landau is one of the best known artists in Israel. She works in a variety of media, ranging from performance and video to sculpture. The jury that chose Landau is chaired by Idit Amichai, representing the Ministry of Culture and Sport, and its members are Naomi Aviv, David Ginton, Dr. Vered Ganai, Yitzhak Livni and Dr. Shlomit Shaked. When they announced their choice of artist last year they said, “Every world created by Landau thus far is witness to her unending passion, and to the forcefulness with which she channels her anxieties as a woman and an Israeli about present-day issues, both universal and regional.”

Israel has been sending artistic representation to the Venice Biennale since 1949. This year, in addition to Landau, Poland’s jury has chosen another Israeli, Yael Bartana, to present at their pavilion.

She sometimes writes for the Forward.