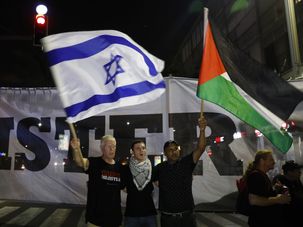 After 21 Years At Americans For Peace Now, I Am Enraged - And Hopeful.

Throughout my two decades at APN, I’ve seen and experienced a lot of ups and downs. I’ve felt many disappointments, but also moments of great hope.

Debra DeLee of Americans for Peace Now explains that she loves Israel and opposes BDS. But she won’t buy SodaStream until the company moves out of the West Bank.

The dramatic events that have shaken the Israeli political establishment in the run-up to national elections next March have been called an earthquake by many. First Amir Peretz staged an upset victory over Shimon Peres to take control of the Labor Party. Then Ariel Sharon parted ways with the far-right politicians in Likud to form the new

A Silent Majority for Peace

Campaign season is here, and it’s important for candidates to remember that the loudest voices in communities don’t always reflect the thinking of the people they claim to represent. Such is currently the case with the American Jewish community. Contrary to what some may think, American Jews strongly favor political candidates who back