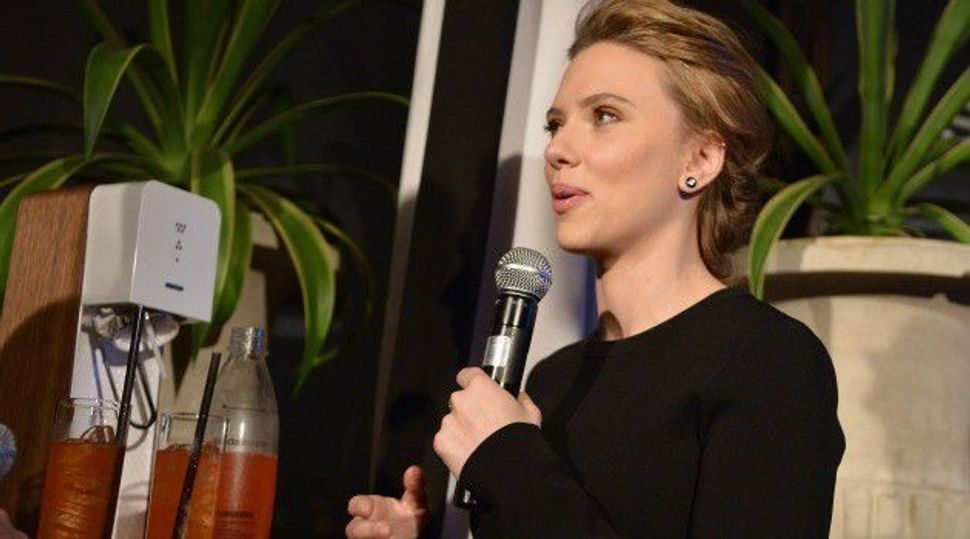 As counterintuitive as it may be, when you see Scarlett Johansson’s Super Bowl ad on Sunday, promoting a product that lets you make carbonated drinks at home, try to see through bubbles and think about the future of the Middle East.

There is nothing wrong with the product itself. Under normal circumstances, I would buy SodaStream and recommend it to my friends. But the circumstances under which the product is made are not normal. And because Israel’s occupation of the West Bank is such an anomaly, as much as I may like Scarlett (and seltzer), I will not buy SodaStream, not until it moves its headquarters away from a West Bank settlement.

But before I discuss bubbles, a few words of clarification are in order. My organization is staunchly pro-Israel. Americans for Peace Now, the sister organization of Israel’s peace movement, is a Zionist organization, proudly committed to Israel’s security and wellbeing. I love Israel and I’m worried sick about its future as a democracy and a Jewish state.

It is because of my love for Israel that I don’t buy products made by companies that are located in West Bank settlements, and that I urge the millions watching the Super Bowl on Sunday to look beyond the luminous actress and the fizz — and to consider the future of Israel and the Middle East.

I strongly oppose boycotts, divestment and sanctions (BDS) against Israel. I actually encourage everyone to buy products made in Israel. The problem, however, is that products like SodaStream don’t come from Israel but from territory occupied by Israel, territory that is to become a part of the future Palestinian state or to be swapped as a part of a two-state deal between Israel and Palestine. In fact, when SodaStream moves to Israel, which it claims it will do, I will encourage anyone to buy lots of bubbly water.

Israeli businesses that set up shop in West Bank settlements help perpetuate the occupation and make a two-state solution for the Israeli-Palestinian conflict less attainable. And if there is no two-state solution, Israel is bound to gradually become a bi-national state, one that cannot be both a Jewish state and a democracy, destined to be a state plagued by internal Arab-Jewish conflict and violence.

SodaStream is not the only one. There are many Israeli businesspeople who chose the occupied West Bank over Israel for their headquarters. Just like most of the Israelis who decide to settle in the West Bank, Israeli businesspeople chose the settlements because they received generous government incentives and subsidies, tax breaks, cheap land for construction, and cheap Palestinian labor.

Thankfully, most Israeli businesspeople resist the temptation. Last week, a group of over 100 top Israeli businesspeople organized to tell President Peres and Prime Minister Netanyahu, as they left for the World Economic Forum in Davos, that the occupation is increasingly damaging Israel’s economy and trade. “We know that if Israel wants a stable economy and to enjoy a better future and continued growth, we must reach a diplomatic settlement. The world is losing patience and the threat of sanctions is growing daily,” said a statement signed by the businesspeople, some of Israel’s leading entrepreneurs and industrialists.

They are right. Israel’s future does depend on rolling back the 47-year occupation of the West Bank — politically, militarily, demographically, and, yes, also economically.

So, if you care about Israel, try to see through the stardust and the fizz when Scarlett Johansson appears on your screen on Sunday. Think about the things that each of us can do to help bring peace to Israel and her neighbors. Think about the choices you can make to help roll back the occupation.

Debra DeLee is the President and CEO of Americans for Peace Now.