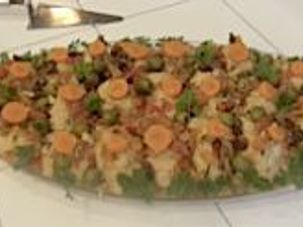 Growing up in Mexico City, each Sunday Susan Schmidt would stand on a chair a few feet behind her Hungarian grandmother — who emigrated from Budapest to Mexico in the late 1920’s — and watch her prepare nokedli, Hungarian dumpling, served with chicken and paprika. But, Susan didn’t start cooking on her own till she was married to a fellow Mexican Jew and moved to L.A. where she still lives today. At that point, her cuisine was not only influenced by her grandmother’s Hungarian heritage and her own Mexican upbringing, but by her mother-in-law’s Polish cooking and her family’s decision to start keeping kosher. Now, she melds the Eastern European roots with her Mexican childhood creating recipes like schnitzel tortas, schnitzel served on a Mexican roll, and fideos, which she calls “Mexican lokshen,” on the cooking blog Challa-peño, that she launched this summer with her oldest daughter Alex. 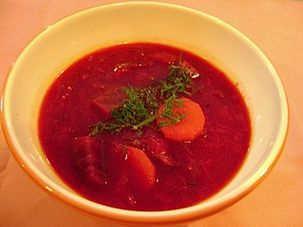 “The perfect borscht is what life should be but never is,” writes Alexandar Hemon in The New Yorker food issue this past November. Until recently, I simply figured I’d never tasted “the perfect borscht.” My first impression of the Eastern European delicacy was the purple liquid my father would buy once a year on Passover. On the second or third day, after having his share of matzoh, he would take out the glass Manischewitz bottle of purple borscht and mix it with just a bit too much sour cream. While he always offered us a taste, my siblings and I would politely decline. 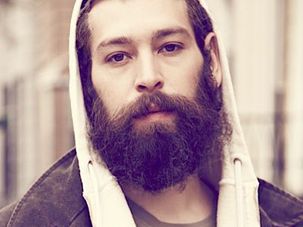 You likely know Matisyahu (born Matthew Paul Miller) as the Hasidic musician who blends classical Jewish themes with reggae sound, but what you may not know is that he’s also a loyal and strictly kosher vegan both at home and when he’s on tour. The reggae star known for such songs as the 2010 Olympic anthem “One Day” tweeted in April “[I’m] kosher plus I went vegan” in response to a fan’s tweet.

Growing up, each member of my family entered our neighborhood ice creamery’s annual, yet now defunct “create your own ice cream flavor” contest. We never won – all of our creations seemed to feature Cheerios prominently – but it sparked some creativity in the kitchen.