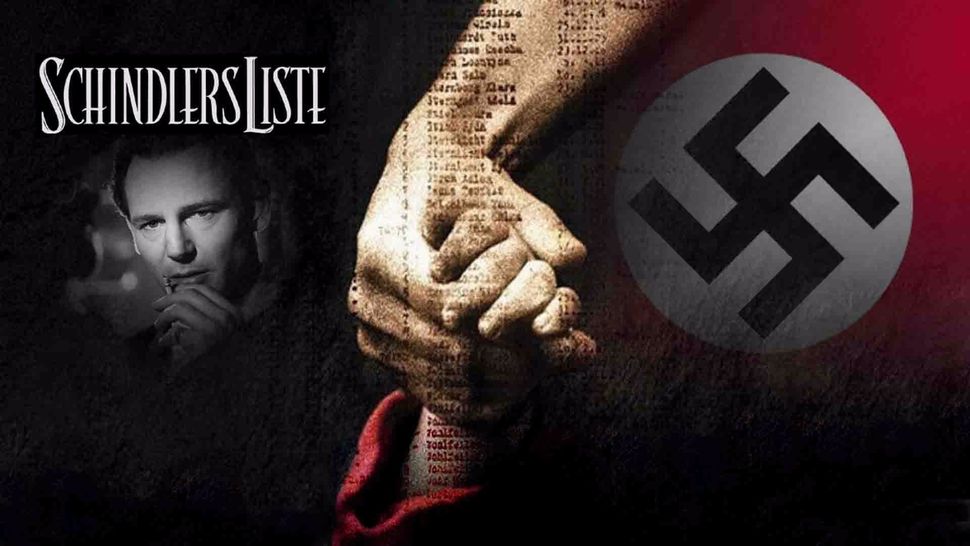 Of course I have seen Schindler’s List, the 1993 Holocaust movie directed by Steven Spielberg. Who hasn’t? Well, my 18-year-old daughter, Esther. So, we huddled on the bed in our tiny hotel room in Amsterdam, next to one of the many canals, and watched it on our laptop computer. After being in Krakow, watching this movie was a whole different experience.

Schindler’s List was filmed in and around Kazimierz and tells the story of the Jews of Krakow during WWII. The specific story is of an ethnic German business man, Oskar Schindler, who became fabulously wealthy off the labor of the Jews, but how he saved approximately 1,100 Jews by placing them on his “List” of employees. When the Plashow Labor Camp was to be liquidated and all remaining Jews were to be sent to Auschwitz-Birkenau, Schindler “bought” his Jews and saved their lives. He used his great wealth for a great purpose.

At the start of the war, Krakow was home to 56,000 Jews. The Germans made Krakow their capital of Poland (the General Government) and Hans Frank took over the magnificent Wawel Palace at the top of the hill. Those Kings knew how to build ‘em. Wawel Palace was built over the course of 6oo years, but saw its most stunning changes during the reign of King Casimir the Great (1333-1370). It is a work of art. When the Germans arrived some 550 years later, they declared the city off limits to bombing and thus, Krakow retains its ancient city charm. 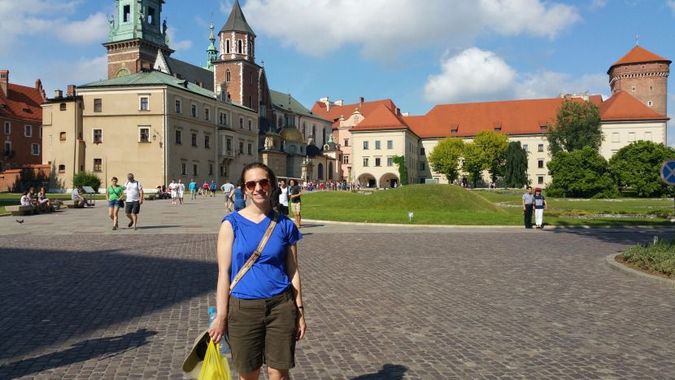 The Jews were not among the charmed of the city, however. At least not between 1939 and 1945. Thousands of Jews were kicked out of the city during the first two years of the war. Then in early March 1941, Hans Frank ordered the remaining 15,000 Jews to move to a ghetto about 5-7 miles from Kazimierz. I suppose Frank thought Kazimierz was just too close to the Palace. I walked the path from Kazimierz to the Palace a number of times while in Krakow – it took about 20 minutes.

Before expulsion, Kazimierz was the bustling, thriving home of the Jewish community. It was bursting with huge Synagogues, Yeshivot (Jewish schools), Mikvaot (ritual baths) and Jews – some wealthy, some not – some assimilated, some not. We visited the Synagogue of the great Rabbi Yisroel Yoseph Isserles – the Rama – one of the greatest scholars of Ashkenazik Jewry who lived in Kazimierz in the first half of the 1500’s. We prayed on Shabbat at the Old Izaac’s Synagogue – built in 1644. There is a stunning, gold-adorned – Temple Synagogue – built in 1862 -that was the seat of the Reform community.

Kazimierz suffered terribly during the war. The Nazis did not bomb it, but they destroyed it pretty well. When Schindler filmed his movie, Kazimierz remained as it had been after the war – a decrepit, dilapidated, mess. The buildings were peeling and cracked. The population was poor. We stood in the narrow alley where this scene was shot: 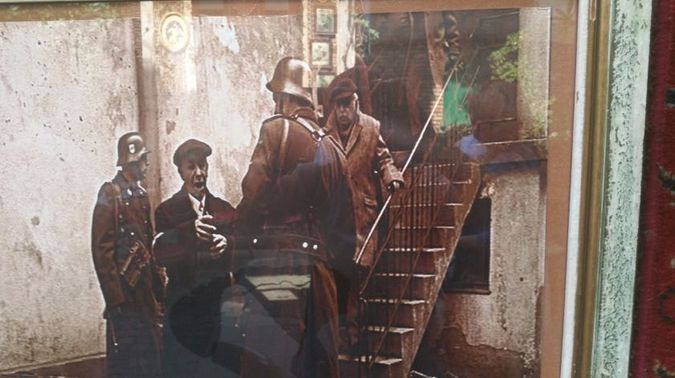 Because of the interest generated by Schindler’s List, Kazimierz was gentrified and is now a hip place with restaurants (some Jewish themed), cafes, outdoor food trucks and concerts. It looks and feels nothing like the movie. This is the same street – I was there just three weeks ago. 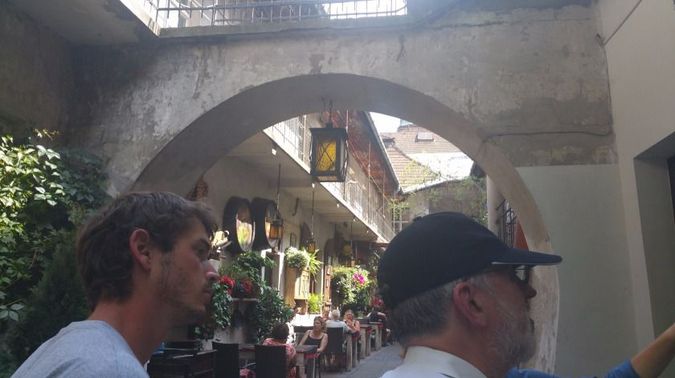 As I watched Spielberg’s depiction of the expulsion, my heart broke all over again. I felt the stones beneath their feet. I had walked on those stones. I felt each sad and painful step they took, carrying their few belongings and their precious children. When the Jews moved into the ghetto – 15,000 of them – they were forced to live in a space that had previously housed 300. It was now surrounded by barbed wire and a tombstone-shaped cement wall (Nazis have a sense of humor too). 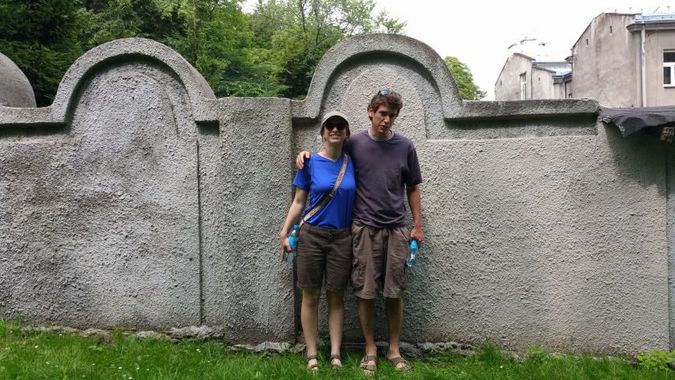 The only open space in the ghetto was a square piece of pavement, next to the tram line. I stood in this square which is now a memorial – called Ghetto Hero’s Square. The memorial, erected in 2005 consists of a series of 33 large chairs facing all directions. These chairs are intended to symbolize the household items the Jews were forced to leave behind. There are also 37 smaller chairs set up on the edge, near the tram stops. These are designed to show that anyone can be a victim. The emptiness of the chairs aims to allow reflection on how Krakow was emptied of its Jews. 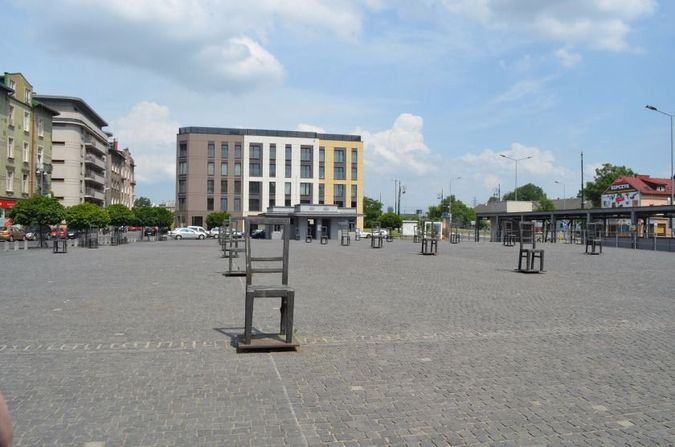 Spielberg’s scene in this square is brilliant. The Germans come to this small patch of pavement and neatly and orderly set up their chairs and tables in order to “register” each and every Jew before they are sent to Plashow, the forced Labor Camp. As the Germans sit comfortably behind their tables, the Jews packing the square have nowhere to sit. Watching this scene just days after I had been standing in the square, I tried my best to imagine what it might have felt like to stand in the packed square – nowhere to sit and forced to watch the neat and tidy German officers sitting in their chairs behind their little desks.

Just at the corner of the plaza stands another important landmark that is briefly shown in the movie – Tadeusz Pankiewitz’s Pharmacy. Though it was illegal, this Gentile pharmacist provided life-saving medication to Jews in the ghetto. One such Jew was my friend Steve Baral’s father, Martin Baral. He was a boy of ten living in the ghetto. He was very ill. He went to Pankiewitz and asked for help. The pharmacist gave him antibiotics at no charge, saving his life.

My friend Steve’s story brings us back to Oskar Schindler. Steve’s grandfather – Samuel Baral – worked in Schindler’s factory and was number 41 on the “list.” And there he was – Samuel Baral – his picture on the wall at the Schindler’s Museum and his name on the top line of the list. I stared at his face trying to see my friend in him. 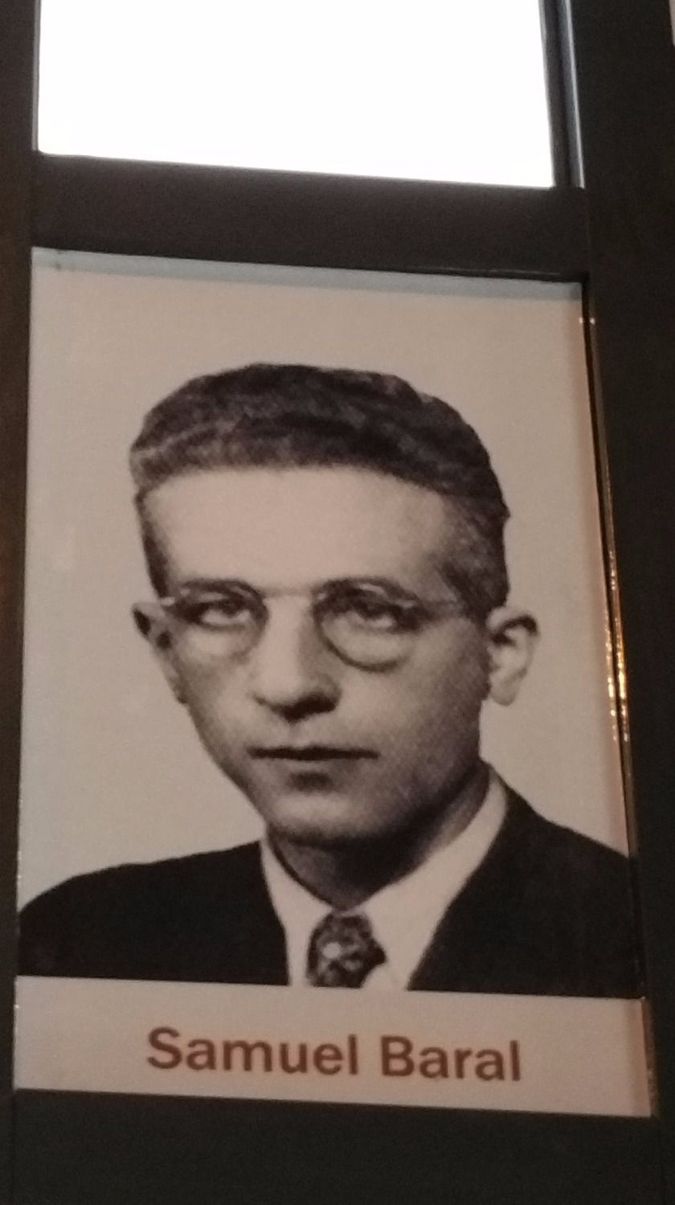 Most Jews of the ghetto were sent to Belzec Death Camp, Auschwitz/Birkenau or shot within the ghetto walls. In the movie we get a glimpse of life in Birkenau. The Schindler women are taken there by error. Spielberg had a cinematic problem – the Polish government would not allow him to film inside Birkenau. So when you see the train coming into the camp through the iconic Birkenau front building and all the passengers get off the train – this is not actually inside Birkenau. Spielberg filmed the train coming out of the camp – through the main gate and filmed the people getting out of the train in the area of the parking lot. Very clever. Now you have to watch the movie again, right? 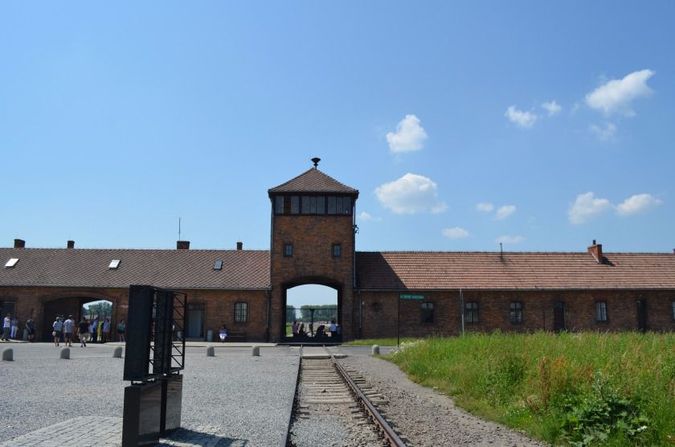 The movie depicts Oskar Schindler’s transformation from a callous, greedy, businessman, happy to exploit the wealth (moves into a Jew’s apartment) and labor of the Jews (it was cheaper) to a man who was on a mission to save his Jews from their certain death. The final scene in which the actual Schindler Jews stand together with their descendants, tells an uplifting, but depressing tale. Look what one man did – by saving some 1,100 Jews, he created families and generations into the future. But, what if there had been 10,000 Oskar Schindlers? What if there had been a million Stys families? What would the world look like then?