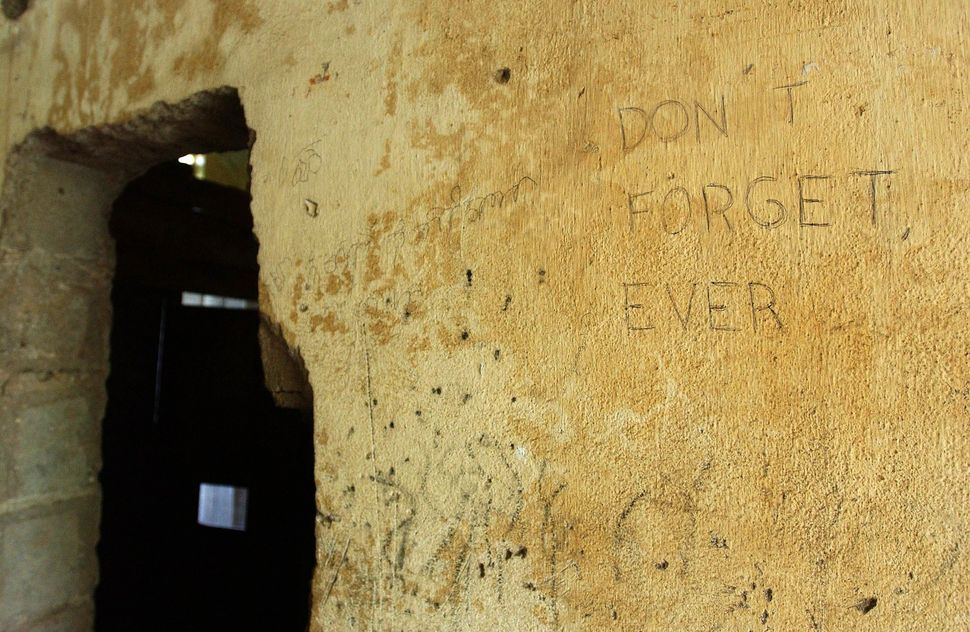 Graffiti marks the wall inside one of the buildings at the former Toul Sleng Prison in Phnom Penh, Cambodia. Image by Getty Images

My husband and I heard these words, playing through tinny headphones in heavily accented English. We must remember so it never happens again. Remember, not simply through thought, but through visits to museums, to sites of murder, to dark buildings lined with photographs of skeletal bodies. Remember, not in the typical sense: not as an individual pursuing a personal memory, but as a community, first learning and then remembering. This activity of remembering, this grim shuffle through history— this was the price we paid to make sure nothing like this ever happened again.

And yet, this wasn’t the first time we were promised that. Promised that, if survivors forced themselves to share their traumatic tales, if we forced ourselves to hear the horrors, the world would never commit the same atrocities again. And so it was painful, hard for everyone, but the price was worth the payoff.

But history had already broken that promise. My husband and I were learning about a genocide that, in spite of the gruesome similarities to everything we had seen and learned about the Holocaust, had taken place three decades later, in Cambodia. We thought we had paid our dues. Yet in spite of all the museums erected to commemorate the slaughter of our grandparents’ families and neighbors and friends, here it was again. Mass graves and torture chambers and terrorization of a country. It had happened again, and as many as 3 million people had died, more than a quarter of the country’s population. It happened here, and then it happened in Rwanda and in Bosnia and in Darfur and it’s happening right now at the hands of ISIS.

Yet throughout our educations, my husband and I had been taught those words— Never Again— again and again. We learned about World War II in history class and the Shoah in Jewish history class and the Holocaust any time our schools could get a survivor in to speak, it seemed. We needed to remember so it couldn’t happen again, our teachers said, the survivors said, my books said.

And here I was, hearing those same words spoken by a Cambodian narrator, his voice thick with the emotion of one who has lived through the worst cruelties human beings can design for one another, his message clear. But to me, they felt empty. I had heard those words so many times, and they had been a comfort: here is actionable advice for genocide prevention. Step 1: Remember. Step 2: Never again. But in fact, it seemed, they had been a lie. Genocide continued to happen, and my countless trips to countless Holocaust museums had done nothing to prevent them. I had a feeling that, appreciative as I was to learn about what had happened in Cambodia, my trips to the killing fields and genocide museum were doing nothing to prevent further genocides from taking place. ISIS doesn’t care that they’re being unoriginal; they don’t care that they’re repeating the terror of countless groups before them, or that memorials have been erected to commemorate the same crimes in different places. Genocide marches on.

So what can we do? Remembering is still important. Hearing the stories, listening to survivors’ suffering, honors the lives that were wrenched away so brutally. I don’t think we should stop this active remembering. But I do think we need to stop using the words “never again.” Because they are a lie. Because it already has happened again. And we need to include that when we teach our children and our students about the Holocaust. We need them to know that Jews do not have the sole claim to genocide and victimization. We are, unfortunately, in the company of millions of others. And if we truly want to prevent genocide from happening again, we need to be aware that it’s happening.

We are told, in Exodus, in Deuteronomy, in Leviticus, to treat well the stranger, for we were strangers in the land of Egypt. Perhaps the same message can be applied here: We have endured the unimaginable horrors of genocide. As Jews, we need to pay attention to the genocide that happens to others, in order to help those who suffer today. In order to prevent it from happening again.