How the Rapper Kosha Dillz Helped Me Go ‘Full Jew’ 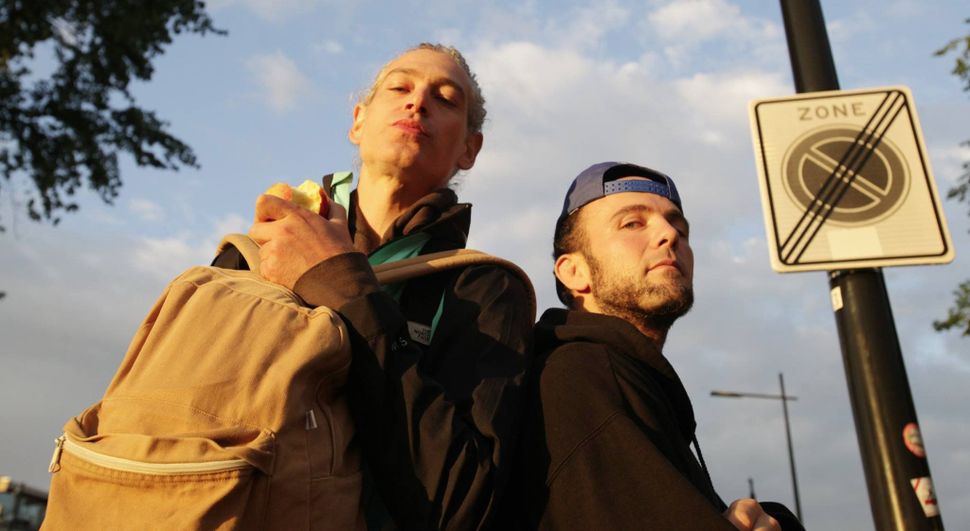 A funny thing happened the other day. I was minding my own business when I came across the following tweet on social media: Matisyahu and Kosha Dillz making big waves with new Anti-BDS song. Intrigued, I clicked on the YouTube link for the music video and listened.

It’s a really catchy song, so when it finished, I played it again. And then again. (And then maybe again. I have an addictive personality). But at some point, on maybe the fourth (or fifth) listen, I had an emotional reaction, and blurted out “I love Israel.” What’s notable about this is that I don’t think I had ever thought or said this before. And I certainly had never felt it. But there I was, alone in my Brooklyn apartment, listening to a pop song, and fully embracing my Jewish identity for the first time as an adult. To be sure, you can love Israel and not be Jewish, and you can be Jewish and not love Israel. But for me, for some reason, this recognition was the final step in my two-decades long struggle with my Jewishness. Indeed, later that day, I told a friend of mine that I had gone “Full Jew.”

So what gives? Had I found the cure for self-hating Jews everywhere, and, if so, was it a music video? Obviously not, though Kosha Dillz is pretty awesome. It’s just that his song was the final push I needed to get to the “promised land.” Sorry I had to go there.

For a while now, I’ve been fond of saying that “Sure, I’m on the Jewish team, but I’m just a bench player, and I don’t want to be subbed in unless there’s an emergency.” What’s more, this was an improvement! For most of my life, I didn’t even want to be on the bench, let alone start. I never tried to play for the other “team” (thank goodness), but I wasn’t exactly a neutral observer either. In fact, if anything, I would have best been described as a heckler. Think Spike Lee when the Knicks aren’t playing very well.

Indeed, growing up my parents had to drag me out of bed every Sunday morning to go to a Hebrew school that probably wished I had stayed home. I asked really frustrating questions like “Wasn’t Abraham a pretty bad father for being OK with sacrificing his son?” and “if God was all powerful why did he need TEN plagues to free the Jews from Egypt. Wouldn’t have one done the trick?” I did have a Bar Mitzvah that I took quite seriously, but after I realized I had obviously NOT become a man (and the gifts were safely in my possession), I decided that I was an Atheist, and that I was no longer Jewish in any way. And it wasn’t enough that I believed this; I actively tried to get other Jews to unidentify with their Jewishness. Honestly, I think I got pretty good at it too,

Yikes. So what happened? What explains my journey from self-hating Jew to now, when I’m asking coach to sub me in.

Well, part of this is just the natural maturation process, growing up, and being more honest with myself about who I really am. But there are two other factors, which have been more important to my ultimate re-identification with Judaism.

The first is sadly becoming so obvious and prevalent that it hardly warrants much of a discussion at all. This is the rise of anti-Semitism on the Left and on many college campuses across the country. Most of the incidents have been anti-Zionist rather than explicitly anti-Semitic, but I frankly don’t see much of a distinction. If history has taught us anything, it’s that the Jews need a home for themselves. And Israel has not forfeited the right to provide that home simply because of The Occupation. I cannot help but view suggestions to the contrary as anti-Semitic, especially when they come from those who ignore and excuse far worse human rights transgressions.

One reason I’ve always been ambivalent to join the Jewish team is that I rejected the notion there was even a “game” being played, at least here in the United States. But I can’t possibly deny that anymore. The climate has changed. People are choosing teams, and so will I. Game on.

The second reason for my evolution is far more optimistic and hopeful. I promise.

We all need to get our identify from somewhere, to feel connected to a larger story, to feel like we matter, and I had always gotten that from the American story, which felt less constraining and more inclusive than the Jewish one. Judaism is about one small tribe in a far away land, where as America is a big story. It’s not just about one tribe. It’s about many tribes right here at home.

And more than that, the American story has got everything. Heroes like our first spy Nathaniel Hale “My only regret is that I have one life to give for my country,” Patrick Henry “Give me liberty or give me death,” and Harriet Tubman, great statesman like Hamilton, Lincoln, and the Roosevelts, epic battles like Gettysburg and Guadalcanal, and periods of national resolve from the Civil War to the Great Depression. How could the Jewish story compete with this? Well, for most of my life, it couldn’t.

But recently, a couple things changed. I realized that these two stories weren’t in competition. I could be a part of both of them, which makes sense because I am. Now, this seems obvious, but a lot of Jews I know gave up trying to be part of the American story after clinging to the Jewish one. I had to become comfortable enough with my own identity to realize this wouldn’t happen to me. And this took awhile.

The other thing that changed is my understanding of the Jewish story itself. The surprising increase in anti-Israel rhetoric has left me, at times, wondering if the other “side” has a point. But in a twist of delicious irony, the examination of this question forced me to take another look at Jewish history, and what I found was an epic story that I had been ignoring or dismissing for most of my life. Stated another way, in contextualizing The Occupation (note, not defending it), I inadvertently developed a much richer understanding of our tribe’s history, one that included not just the two Intifadas, 1973, 1967, and 1948, and, of course, the Holocaust, but a story of perseverance that preceded the state of Israel. A saga that includes the kingdoms of Israel and Judea, the destruction of the temples and the many actual (not imagined) exoduses from the holy land, a rich religious and cultural tradition that thrived in Europe despite the pogroms and the ghettoization, and heroes like the Maccabees, like Herzl, and like Rabin. Indeed, the Jewish story is a great one, defined ultimately by our ability to overcome and to thrive despite the odds. It’s about a people who rose from the ashes to build a thriving democracy out of the desert. I want to be a part of that story. Who wouldn’t?

Daniel Miller is a lawyer, activist, and writer in New York. His work has been published in Newsweek, the Washington Post, Psymposia, High Times, and AlterNet.

How the Rapper Kosha Dillz Helped Me Go ‘Full Jew’