Kol Nidre, Kabalah, and the Cubs 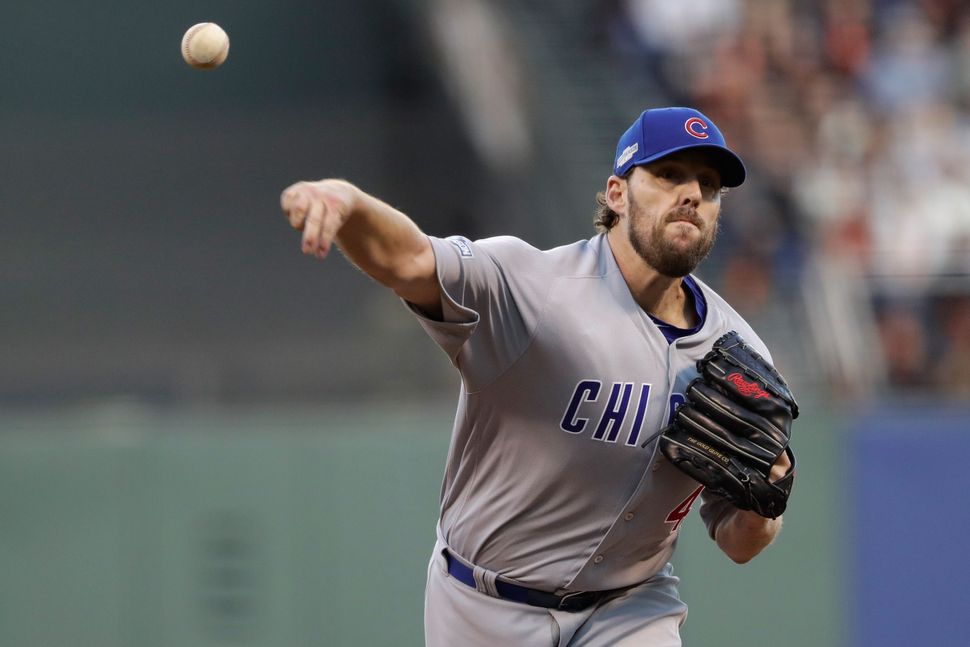 A few hours after the Kol Nidre service that marks the beginning of Yom Kippur, 11:07 p.m. Chicago time, my phone buzzed. My iPhone was on for emergencies: with the kid away in college and my 91 year old mom alone in her apartment, I had to check.

“Dad, Cubs had a 4-run 9th inning to win 6-5,” he wrote. And then the apology: “ A religious enough experience to justify watching on Yom Kippur.”

As the Deuteronomist urged, the Cubs had chosen the blessing, ditched the curse. The goat—for the moment— had been banished to Azazel. They had returned from a 5-2 deficit that darkened Chicago’s gates, to do what had not been done since Steve Bartman became a household name: vanquish Giants as they stormed through the playoffs.

I scolded/thanked my son for establishing a new mitzvah of “protecting a Cub” (from diversions in synagogue?) and assessed the evidence. Did this Cub Kippur contain, at long last, a scalable teshuvah (repentance)? A creditable kabbalah (mystical Jewish meaning)?

I hadn’t watched the game or clicked the highlights until now. So bear with me as we apply some core Mosaic metrics to the Cubs.

First, it should be noted, more than 40 years of wandering have passed since the most famous Cubs collapse in 1969 against the Mets. Ron Santo and Ernie Banks have left this earth. Kenny Holtzman never even got his chance to piously skip a Cub playoff Kippur. Thankfully, new generations of hopeful children (like my one Cub fan son) have been born, circum…spect, as they must be.

Secondly, the goats of Cubs 2003 (another October Cub Kippur year, by the way) were sent to the desert or sacrificed in trades.

The 2016 Cubs have combined slingshots (shortstop Addison Russell, second baseman Javier Baez) with superpowers (Kris Bryant, Anthony Rizzo) to compile the team’s best record since, choose one, the first socialist kibbutz was founded in the holy land or Hank Greenberg was conceived.

Perhaps disappointing to some of Chicago’s Jewish community, there are no Jewish members of the team, but writ large among the superstars is President of Baseball Operations Theo Epstein. Epstein, in some sense, has earned a reputation as an escape artist, a Houdini of Boston. The “Curse of the Bambino” was said to have burdened the Red Sox from the year they traded Babe Ruth to the Yankees until Epstein helped conquer the curse in 2004. The Epstein-curated Red Sox mounted a miraculous comeback from three games down against the Yankees in the American League Division Championship and then triumphantly swept the St. Louis Cardinals in the 2004 World Series. But, truth be told (in a season of fact-checking) the Red Sox curse was a ploy, a plot turn, written about for the first time some 70 years after the supposed spell. The Bambino was a baby curse compared to the goat.

William “Billy” Siannis truly did curse in anger at Cubs owner P.K Wrigley’s refusal to let his goat into a World Series Game 4 seventy one years ago. It’s a tale that Chicago Tribune columnist Rick Kogan vividly brought back to life last month. Kogan reminded readers that “Billy” in this famous tale is the Billy Goat bar’s human owner, while the goat was named “Murphy.” They had reserved seats 6 and 7, box 65, tier 12. Siannis famously sent Wrigley a telegram after Murphy was denied entry to Game 4 of the Tigers-Cubs Series because, in Wrigley’s words, “ the goat smells.” After the Cubs lost the game and the World Series, Siannis wrote Wrigley, “Who stinks now?” No ritual—not the invitations in Wrigley Field of Murphy’s progeny, not the apologies, not the “Reverse the Curse” ceremonies, including one at the mound by the late Ernie Banks—has been able to reverse the curse. The Cubs haven’t won a World Series since 1908. They haven’t even won the pennant since 1945.

In 2015, they looked capable, but the goat made a brief reappearance when a New York Met named “Murphy” (this isn’t midrash) mysteriously couldn’t stop hitting home runs against the Cubs, leading to a four game and out exit from the division championship series.

This week’s giant-killing Yom Cubpur did seem to emit lightning and sound the horns. But can the Cubs continue to fend off the curse? One positive sign is that the ex-Met and goat-channeler Murphy, now of the Washington Nationals, was eliminated from the playoffs as the Los Angeles Dodgers beat the Nationals in Game 5 Thursday.

But there is also a mystical property that may be at work in the Cubs favor that illuminates what happened on the night of October 11. Quietly , the Cubs playoff games at Wrigley Field have all received a start time of 7:08 p.m. (The Cubs’ first two wins against the Giants began at that time and the first five games against the Dodgers have already been scheduled for that hour, Chicago-time).

There is a “pshat,” or simple, reason for this: advertisers like to stuff in television ads at the beginnings of games when attendance is higher. Three more minutes of ads after the more conventional starting time of 7:05 may be attractive to the networks.

But, whoever is responsible for this start time, a Cub kabbalah also arises.

Perhaps some numerologist knew that it was time to put 708 up against the goat.

Because in mystical (but well-established) gematria, 708 is known as the “great number of grace.”
Most curious of all, 708, translated into its aleph-bet counterpart, spells out—ask a Rabbi if you don’t believe me—“teshuv.” Repentance. Returning to your true blue Cubs you.

So when the Dodgers and Cubs face off Saturday (and at least the next four games) at 7:08 p.m CST, the goat’s time may finally be up.

Kol Nidre, Kabalah, and the Cubs