Israeli Love in the Time of Trump: A Broken Marriage and a Budding Romance with a Muslim 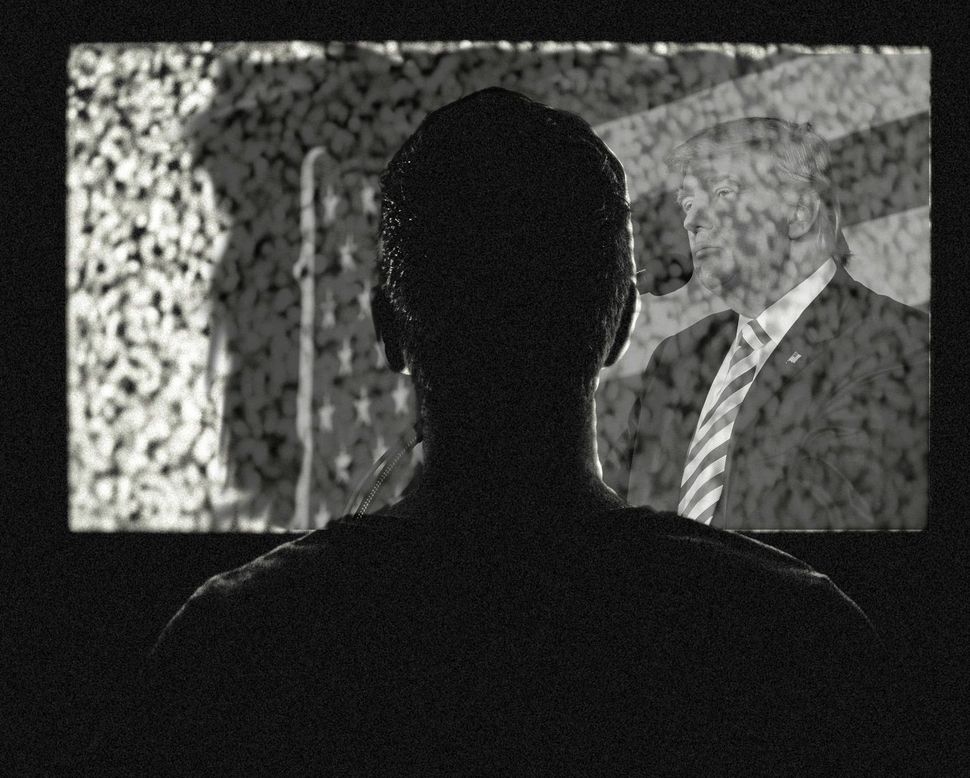 I left my husband, an Israeli American Jew, in the months after Trump launched his campaign. By the time Trump clinched the Republican nomination, I was in love with an Egyptian Muslim. It’s not a path I could have predicted, but it’s one that taught me many valuable lessons about love and the future I see for myself. All names have been changed.

When I look back on my brief marriage, it was defined by intolerance, bullying, and hypocrisy – all things Trump. My ex-husband, Lior, grew up in Israel and became a U.S. citizen four years before we met. When we fell in love, he wasn’t particularly interested in U.S. politics and supported my liberal leanings, but that all changed quite quickly.

Lior’s youngest brother, Amit, then 23, came from Israel for our wedding. On my first day of married life, Amit told me he had a six-month tourist visa and was thinking of staying for a bit. He lived with us for many weeks before finding a sublet and starting to work under the table; he never made a meal, helped clean up, offered to take the dog out, or gave us much down time. My husband gave him money, a lot of it and without discussing it with me, which set back the financial plans we had created so carefully. My concerns were brushed aside.

That spring, Lior and Amit started watching videos of Trump’s public appearances in the months before he declared his candidacy. Those videos pierced the quiet of our small condo. Like many, I initially wrote it off and didn’t think Trump would make it very far. I humored Lior, and asked that he use his headphones when I was in the apartment. It was a forced quiet, me watching my husband getting a little too excited for my liking while watching Trump. I tried to engage Lior in conversation and understand why. He thought Trump’s “business sense” would be useful in Washington and, sadly, he supported a lot of the anti-Muslim rhetoric.

As Trump forged ahead, Amit stayed. He stayed despite my calls for privacy as a newlywed and despite my ethical and moral objections. If I was a “good Jew,” I was told, I’d be more understanding. He stayed for all kinds of moments and situations he shouldn’t have, and my husband and his family enabled every minute of it. They pooh-poohed my objections, and I was led to believe that Amit would leave when his visa expired. I tried to be patient.

In late March, just before Passover, I learned I was pregnant. Lior and I had always wanted children and were thrilled. Unfortunately, it was short lived. The Friday of the following week, I went to the doctor with bleeding and was sent home for watchful waiting. Amit was scheduled to come for Shabbat dinner that night; I wanted to cancel, but my husband said he’d cook and take care of everything. Could I try to be a good sport?

In the middle of our chicken dinner, candles burning, I started bleeding – heavily – and knew I was having a miscarriage. I went to the bedroom to call the doctor. I told my husband I wasn’t feeling well and that Amit needed to finish eating and leave. I wanted Lior’s support and attention. What did I get instead? An hour later, I emerged from the room and found Lior and Amit sitting on the couch, watching clickbait videos on Facebook, in no hurry to end the night. I told Amit there was a medical emergency, and that it was time to go. By morning, I was numb with the realization that my marriage wasn’t working out.

In the months that followed the miscarriage, I was bullied and threatened to try again – and I continued to refuse until the relationship was on more solid ground. There were timelines, ultimatums, Rabbinical and family interventions, and couples’ therapy to help salvage our relationship. There was a second honeymoon in the mountains, and still my husband had to attend to Amit’s non-urgent crisis. I needed to be more flexible, Lior said.

In Judaism, the concept of shana rishona (the first year) tells us that the first year of marriage is so precious and so critical that newlyweds get an extended “honeymoon” to build their life together. In biblical times, new grooms were even excluded from army service. Instead, my husband spent our first six months prioritizing his brother over the vows he made to me.

Within weeks of the expiration of Amit’s visa, I filed for legal separation and ultimately divorce. Amit was not fleeing war or political persecution, but staying in the U.S. solely because he felt like it and wanted to make it big, like his idol Donald Trump. I would not be complicit in supporting that situation. Afraid of revenge and hurt by a community quick to judge me for leaving a marriage so soon (few knew the full story and few needed to), I’ve kept pretty quiet about what happened. It’s why I’m still posting this piece anonymously.

With a move closer to family in the South and months of therapy and healing, I slowly opened my heart to dating again. It’s not easy at any age, but being a divorcee in my mid-30s in a conservative part of the country has been challenging to say the least. I slowly opened myself to dating apps and welcomed introductions in the Jewish community. Who did I meet? Two recovering addicts, a man battling clinical depression (he suffered a severe setback after a few dates), a man with significant social anxiety, a Trump supporter, and a fellow liberal that ghosted me after three magical and lengthy dates. Disheartened, I gave up and focused on yoga.

Nine months after I left the marriage and two months after the divorce, I agreed to join a friend at a social event geared towards expats. I work in international development, have lived and traveled abroad extensively, and love connecting with other cultures. It was early April, but already humid, and I sat at a table outside with my friend. Ahmed* briefly stopped by to say hello, but got pulled away after a few minutes when his friends wanted to leave. I was struck by Ahmed’s olive skin and his grey-blue eyes. He was outgoing and quick to smile. I learned he was a doctoral student from Egypt, and remember wanting to talk more.

Turns out he did too. Ahmed came back, pulled up a chair, and the two of us spent the next who knows how long locked in political discussion, oblivious to everyone sitting around us. Within minutes, we were wonky liberals comparing the nuts and bolts of the Sanders and Clinton campaigns. What drew me to him, intensely, was when he told me about his trip to the Trump rally in Fayetteville a few weeks before. I did a double take. Yes, Ahmed the liberal Muslim ignored the warnings of all his friends and (primarily Jewish) coworkers and went to the rally, which made national headlines with its violence. Why? He wanted to meet Trump supporters and try to listen and understand their positions. I was stunned… and impressed.

Ahmed got in touch shortly after that night to invite me on a hike. Nervous and hesitant about dating outside my faith, I called a close friend, who previously worked on Middle East peace issues. What better way to celebrate the spirit of Passover and freedom, she said, than a stroll through the wilderness between an Egyptian and a Jew?

The months that followed were a profound time of learning and openness. Our relationship blossomed as the election season ramped up. I learned about Ramadan, celebrated Eid, challenged my own views on Israel, and watched and re-watched Khizr Khan’s Democratic National Convention speech. I learned that, as a graduate student in Germany, Ahmed was involved in efforts within the Muslim community to stop extremism.

Late on July 3, Ahmed knocked on my door, breathless. He came directly from his naturalization ceremony on the beach several hours away. I was the first person he told – before his family and closest friends. He had applied for a green card while in Germany, was selected through the lottery, and had quietly and steadily been going through the citizenship process. In other words, he did it in the most “kosher” way possible. He’s a man of ethics, a man of his word, a man of peace, and a man of action. As a new citizen, he is spending this election season registering voters, organizing a voting drive, and putting my “slacktivist” nature to shame.

Ahmed and I continued our treks through the wilderness, and spent most weekends hiking or exploring nearby parks. It was at one lake in late July, on a little stretch of private beach off a hiking trail where we spent an afternoon swimming, when I realized I was in love with him. In love with his mind and his ability to listen and view the best in humanity. He was everything, it turns out, that my husband was not.

I wish I could say that things ended happily with Ahmed, but the timing was not right for us, at least for the time being. Should anything change, there are still major concerns to reconcile with our families (neither would be thrilled with the relationship), our views on Israel, and how to raise children.

Yet, my months with Ahmed helped remove any twinge of doubt I had about leaving my marriage. It taught me what a healthier and balanced partnership could look like; it is one that I am capable and deserving of. I learned to open my heart again after so much pain. Never again will I tolerate the bullying and emotional manipulation that I experienced in my marriage. I learned that, after a lifetime of looking for a Jewish partner, what’s more important to me is being with someone who is compassionate and open-minded.

There is one thing I know for sure: on November 8, Ahmed and I will both be voting for Clinton, and smiling. In the shadow of such a hate-filled election season, my story is a simple reminder that love trumps hate.

Israeli Love in the Time of Trump: A Broken Marriage and a Budding Romance with a Muslim