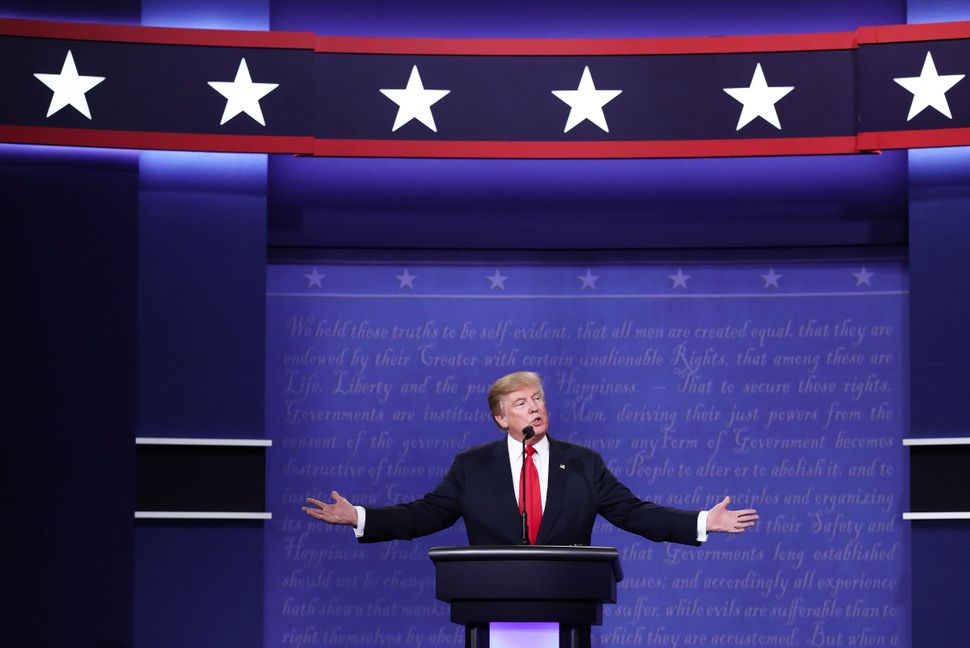 The United States has been kind to the Jews. European physical features have helped them become recognized as white in the American racial caste system. The First Amendment’s promise of religious freedom has helped too. However, the whiteness, and in effect the general welfare of American Jewry may soon be a thing of the past, and Donald Trump is partly responsible.

While mostly Ashkenazi American Jews have had white privilege since at least after World War II, they have never experienced some examples of it that other ethnicities have. Jews generally don’t have to fear for their lives in interactions with law enforcement, and media depictions of Jews are generally positive. On the other hand, Italian-Americans don’t go through security checkpoints at their cultural centers out of fear of hate crimes. Irish-Americans aren’t accused of dual loyalties when many, like New York Rep. Peter King, supported Irish Republican Army terrorism against the United Kingdom, the United States’ closest ally, decades after the immigrant generation. Clearly Jews are still more “ethnic” than other white Americans, leaving them more vulnerable to prejudice.

Trump has exploited this vulnerability during his campaign, and many of his supporters are volatile anti-Semites. If he was a typical candidate, this anti-Semitism might not be a huge problem, but he isn’t. He’s a right-wing, populist, authoritarian demagogue with no political credentials. His appeal relies on fear-mongering and open bigotry. Problematic as it may usually be to compare people to Nazis or Hitler, something is obviously wrong when Germans have compared Trump to him.

The Jews who deny Trump’s anti-Semitism and the threat it poses to them and their American coreligionists ignore his father’s alleged association with the Ku Klux Klan, his comments about not needing Jewish donors’ money, and the Jew-hatred of his base. If the Supreme Court, and the next several decades of American legal history, weren’t at stake in this election, these issues about the Donald’s relationship with the Jews would not be as much of a concern.

However, the next president may appoint as many as 4 Supreme Court justices. Normally, this would mean a leftward or rightward shift in American jurisprudence. Trump, however, is not a constitutional conservative. On the contrary, he has showed blatant disrespect for the constitution by calling for a ban on Muslim immigration, the deportation of American citizens born to undocumented immigrants and the loosening of libel laws, proposals which blatantly violate the First, Fifth and 14th Amendments.

A future Supreme Court with Trump-appointed justices threatens the American republic. Several American legal scholars have acknowledged that such a court could create a constitutional crisis. It would be natural for Trump to appoint justices with similar authoritarian tendencies. Once he had enough of his own appointees on the court, he could easily use them to interpret the constitution out of existence, dismantling the foundations of the republic and making himself dictator.

As a dictator, one can only imagine what Trump would be willing and able to do to the various ethnic, racial, and religious minorities toward whom he has promoted animosity throughout his campaign. Once he has his way with African-Americans, Hispanic-Americans and Muslim-Americans, Trump will need to find a new scapegoat to preserve the paranoia his supporters experience which drives them to rally behind him.

If history is any guide, this new scapegoat will be Jewish-Americans. The left-wing political tradition and stances of many American Jews has always played a major role in the anti-Semitism of the American far-right. The latter has a long tradition of holding the former responsible for such social “ills” as ending Jim Crow and supporting immigration policies that are more equitable for non-European immigrants. Considering anti-Semitism is a core tenet of the “alt-right,” which has served as the political and intellectual core of Trump’s base of support, now is the perfect time for American Jews to start questioning their white privilege.

Many American Jews will continue to deny that their whiteness, and in effect their welfare in American society, is at stake as a result of Trumpism. They are deeply naive. Even Trump’s former opponent, Ohio Gov. John Kasich released a campaign ad using Martin Niemöller’s famous poem, “First they came…” to aptly compare Trump’s bigoted brand of authoritarianism to that of the Nazis.

Trump’s rise has proven that American Jews are only white when it benefits white supremacism for them to be seen as such. A Trump presidency would likely eliminate Jewish whiteness completely, causing American anti-Semitism to be perhaps more virulent than ever before. If American Jews want to keep their whiteness, or at least their welfare in the United States, they must do everything in their capacity to help stop or contain Donald Trump and the bigoted ideology he has incubated.

Michael Rock is a writer, researcher, and blogger with a profound interest in domestic and global affairs.