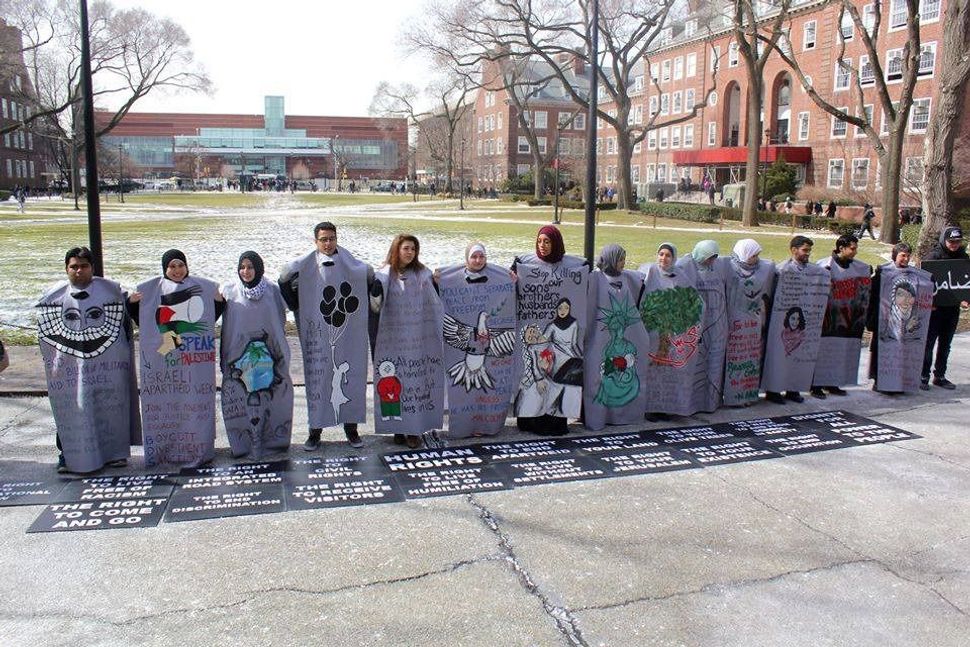 Last month, The City University of New York (CUNY) released a report by two CUNY-hired lawyers to investigate allegations of campus anti-Semitism. The investigation was triggered by a 14-page letter from the Zionist Organization of America (ZOA) to CUNY’s leadership, describing the anti-Semitic harassment and intimidation that students were enduring on four CUNY campuses, perpetrated in part by the so-called “Students for Justice in Palestine” (SJP) group.

After the report was released, the Forward published an article about it. The article is both perplexing and troubling. Perplexing, because the Forward declared that SJP was “vindicated of anti-Semitism charges” in the report, when in fact, the investigators reached exactly the opposite conclusion. And troubling, because the Forward should be stronger and more focused in highlighting the serious harassment and intimidation that Jewish students are facing today.

The Forward article didn’t mention that the investigators actually confirmed that CUNY has been plagued by numerous anti-Semitic incidents and that SJP was responsible for many of them. At CUNY’s Brooklyn College, for example, a student’s mother was harassed by SJP members simply because she was cleaning offensive anti-Israel chalkings off the sidewalk which were illegally drawn there in the first place. Her daughter, who witnessed the harassment, was herself too frightened even to file a complaint about it. Another Jewish student at the college who did not endorse the SJP’s positions was repeatedly harassed by an SJP member who sent her alarming messages, including, “I hope you don’t walk alone on campus.” Yet another Jewish student was threatened by an SJP member simply for refusing an anti-Israel flyer; the report noted that the student was told that “they would knock on every door in Midwood [a section of Brooklyn] until they found her.” At John Jay College of Criminal Justice, SJP threatened a student group for co-hosting an event with Hillel that had nothing to do with Israel. As the CUNY report confirmed, the group dropped its sponsorship, notifying Hillel that “we fear for your safety and ours.”

In addition to substantiating SJP’s responsibility for several anti-Semitic acts, the CUNY report also shows that SJP incited Jew-hatred in others. At an SJP-organized rally at Hunter College to protest rising tuition and growing student debt, SJP turned the rally into a vehicle for attacking Jews. SJP promoted the rally on Facebook by criticizing “the Zionist administration” for, among other things, hosting Birthright programs and study-abroad programs in “occupied Palestine” – meaning Israel – and for “reproduce[ing] settler-colonial ideology through Zionist content of education.” SJP could not possibly have known whether CUNY administrators support Israel; this was an instance where “Zionist” was a code word for “Jew” – a phenomenon that the CUNY investigators confirmed. Given how SJP framed the rally, outrageously blaming Jews and Jewish programs for high tuition and student debt, it is hardly surprising that, as the CUNY report confirmed, protestors at SJP’s rally screamed that Jewish people are “racist sons of bitches” and shouted “Go back home, and get the f—k out of my country,” and that the crowd chanted, “Jews out of CUNY” and “Death to Jews.”

None of these troubling findings were reflected in the Forward article. Nor did the article even mention the investigators’ findings that the anti-Semitism has caused students to feel harassed, threatened, and unsafe, making some fearful of openly identifying as Jewish on campus. Instead the Forward published the statements of SJP’s most vocal defenders who had the audacity to assert that “ZOA’s claims that SJP engaged in anti-Semitic activity are completely unsubstantiated,” when in fact, many were substantiated. The Forward even accepted without challenge SJP’s claim that anti-Zionism is not anti-Semitism, never noting the fact that the U.S. government has long recognized that anti-Zionism – denying Israel’s right to exist – is anti-Semitism.

Even more inappropriately, the Forward didn’t seek a response to SJP’s false claims from anyone versed in the situation. Instead, the paper published comments from Dov Waxman, a professor at Northeastern University who falsely claimed that the ZOA has made “largely baseless” and “exaggerated” claims of anti-Semitism at CUNY and other schools. In fact, Professor Waxman lacks any personal knowledge about the problems at CUNY or on any of the other campuses where the ZOA has worked to protect the legal right of Jewish students to a learning environment that is physically and psychologically safe. Indeed, before Waxman’s tenure at Northeastern, the ZOA provided the university’s president with a detailed account of the anti-Semitism that Jewish students were enduring on his campus. The Anti-Defamation League followed up with its own letter to the president, corroborating the incidents we described and urging that “the assertions catalogued in ZOA’s recent letter cannot, and should not, be dismissed.” They weren’t. Commendably, Northeastern took several positive steps to remedy the hostile environment for Jewish students, including placing SJP on supervised probation.

Members of the public often ask us why campus anti-Semitism is being tolerated when university leaders are – as they should be – cracking down forcefully when other minorities are targeted. The answer is a complicated one. But it surely doesn’t help when the problem is minimized or justified. We hope that in the future, the Forward and other respected publications will more thoroughly cover every aspect of this growing problem.