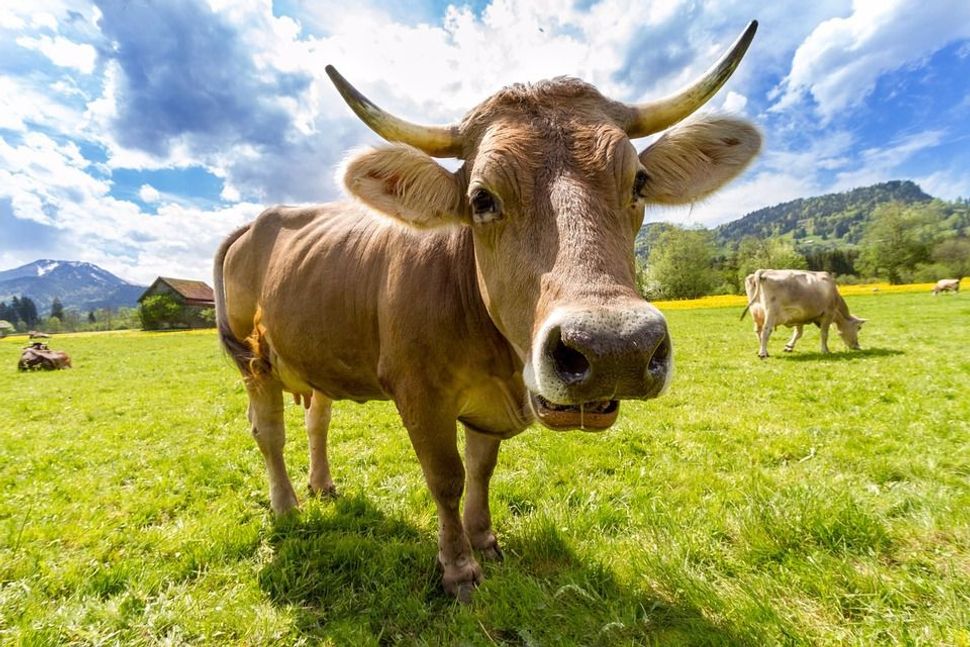 I am a shochet. A shochet is a trained and certified practitioner of kosher slaughter (shechita). I am also an individual who cares deeply about animal welfare. My interest led me to help co-found The Jewish Initiative for Animals, an innovative new faith based animal welfare organization, and serve as their Kosher Meat and Animal Welfare Specialist.

When I started learning shechita five years ago, I simultaneously began studying its impact on animal welfare. After visiting a number of slaughter facilities, working in a kosher beef plant for three years, and studying relevant scientific literature, I came to the conclusion that kosher slaughter can be perfectly humane when adhering to a thoughtful set of welfare protocols. When performed without such protocols, however, the results can be devastating.

This week, PETA (U.S.) and Anonymous for Animal Rights (Israel) went public with an investigation and an accompanying video that implicates several kosher slaughterhouses in a brutal and inhumane practice called shackle and hoist (illustrated below). Shackle and hoist involves a controversial form of restraint where fully conscious animals—typically cattle—are hoisted in the air or dragged by one leg into a position that exposes their necks and allows the shochet to make the kosher cut. Shackle and hoist is widely regarded as being inhumane for animals and dangerous for workers. Furthermore, the video clearly shows animals being skinned and processed immediately after slaughter, while still conscious. 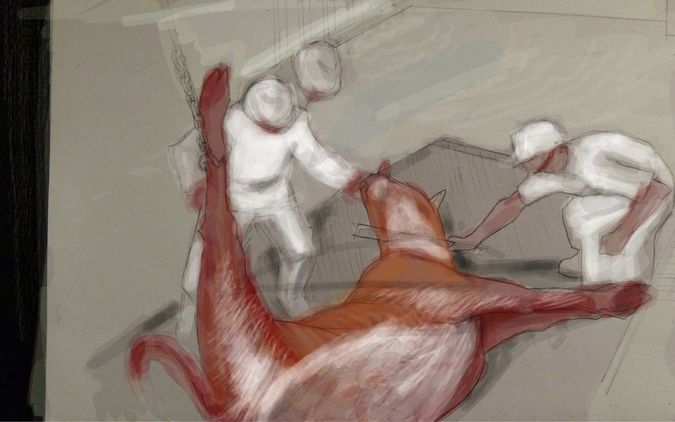 The investigation involves several South American slaughter facilities, Neto Group (a large Israeli meat distributor), Alle Processing (a large U.S. distributor), and others. The practices exposed in the video represent the opposite of humane slaughter. As a shochet who is proud of the long-standing tradition of shechita that I’ve inherited, I am deeply saddened by the disturbing images in the newly uncovered videos. By uncovering these acts of cruelty, this investigation reinforces the crucial need for establishing animal welfare protocols at kosher slaughter facilities, something the Jewish Initiative for Animals has advocated for since its inception.

Even the Israeli Rabbinate, the organization many consider to be ultimately responsible for the continuation of this practice, has admitted that shackle and hoist is unacceptable. Its leaders have issued statements criticising shackle and hoist and have promised that the practice would be phased out after the release of undercover videos in both 2008 and 2010. Despite their claims to the contrary, it is clear from today’s news that the Israeli Rabbinate’s leadership continues to be complicit with facilities that mistreat animals and endanger workers.

In recent months, the Jewish Initiative for Animals has been considering how best to address the continued use of shackle and hoist slaughter. We have researched alternative methods of slaughter used in South America, including at a facility in Uruguay that uses upright kosher slaughter exclusively. 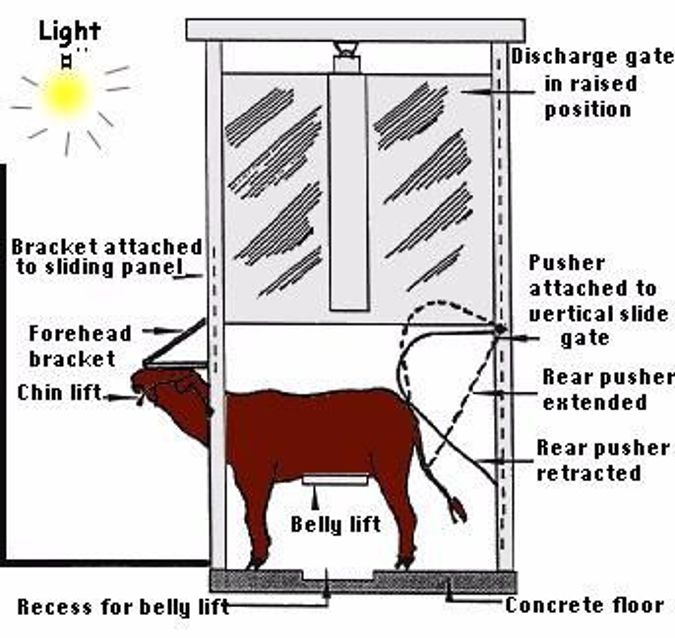 During upright kosher slaughter (illustrated left), the animal is killed in a comfortable standing position. Upright systems are efficient, improve meat quality, and have been endorsed as humane by both the American Veterinary Medical Association and Dr. Temple Grandin, the country’s foremost expert on humane slaughter.

During my visit to the Breeders and Packers of Uruguay (BPU) facility in February, I was impressed by the plant’s transparency and humane animal handling practices. As reported in the Forward on Nov 2, this new facility represents a successful model for high-welfare kosher beef in South America, and one that could become a substantial source of higher-welfare meat for Israeli consumers. BPU currently sells all of its kosher meat to Alle processing, a large U.S. kosher meat distributor. Unfortunately, Alle also imports significant amount of beef from Frigorifico Las Piedras in Uruguay, a facility that has been investigated for cruel shackle and hoist slaughter practices in the past.

There is one major obstacle standing in the way of upright facilities, like BPU, from selling their high-welfare kosher beef in Israel: the Rabbinate. The Israeli Rabbinate refuses to import meat from these plants simply because they slaughter animals that are standing. Upright slaughter is accepted by the Orthodox Union and most kosher consumers, but some members of the ultra-Orthodox community insist on only eating animals that were slaughtered in an inverted position. The Rabbinate, which includes members of the ultra-Orthodox community, unlike the Orthodox Union, requires inverted slaughter exclusively.

Were the Rabbinate to accept upright shechita, more slaughterhouses located in countries across the globe would be able to export meat to Israel, likely supplanting the need for imports from inhumane shackle and hoist facilities. Kosher consumers deserve humane choices; the Rabbinate’s dogged commitment to inversion prohibits the influx of more humane kosher meat options and alienates an emerging population of Israelis that cares deeply about animal welfare.

Over the past few years no less than three undercover investigations into Israeli slaughter facilities have surfaced and enraged the public, causing substantive changes to Israeli slaughter and pushing a growing number of Israelis to become vegans and vegetarians. These videos inspired a newfound awareness in Israeli consumers and led to the creation of Israel’s first ever animal welfare certification, Hai Bari (which means Healthy Life in English). This new investigation captured practices that are as bad or worse than those displayed in the previous investigations, and we trust that the Israeli public will no longer stand for this kind of cruelty to animals.

The Jewish Initiative for Animals is putting out a call to the organizations implicated in this investigation, to Jews, and to kosher consumers everywhere:

2) We call on all Israelis to boycott South American kosher beef until this issue is resolved. Israeli consumers can either eschew beef altogether or buy Israeli beef, such as products that bear the Hai Bari label. We also encourage all Israelis to demand access to upright slaughtered meat.

3) We call on American consumers to e-mail, call, or send a letter to Alle and voice your outrage. Tell them you will stop buying Alle products (including unnamed cuts of meat from South America, which are likely to be distributed by Alle) if they continue to import meat from shackle and hoist plants.

4) We call on Rabbis, Jewish leaders, and community members to get your synagogues, summer camps, JCCs and other Jewish organizations to formally boycott shackle and hoist products. If we don’t stand against this in our communities that means we are standing with those that commit these acts.

We know that large numbers of Jews and kosher consumers across the country care greatly about animal welfare. We hope that in light of the new footage, the Rabbinate, Alle, and Neto will take a proactive approach by discontinuing import of this meat and allow more transparency as soon as possible. The Agristar kosher slaughterhouse in Postville, Iowa, overcame challenges and instituted an excellent animal welfare regime after buying the plant from a company which had a disturbing record of animal abuse and has emerged as a more stable and successful enterprise. There is no reason why a similar result can’t be achieved here.

As a shochet, I understand and know intimately the process of turning animals into food. As a Jew, I am also bound by the obligation and human sense of compassion to lead an animal as gently as possible toward death. We can do better, and I hope and pray that what the public has learned through this investigation will end shackle and hoist for good, allowing shechita to be practiced as the holy and humane form of slaughter that it should be.

Yadidya Greenberg serves as the Kosher Meat & Animal Welfare Specialist at the Jewish Initiative for Animals, where he works to help increase access to and popularity of higher welfare kosher meat products. He teaches about his experience as a shochet and animal advocate to audiences throughout the United States.