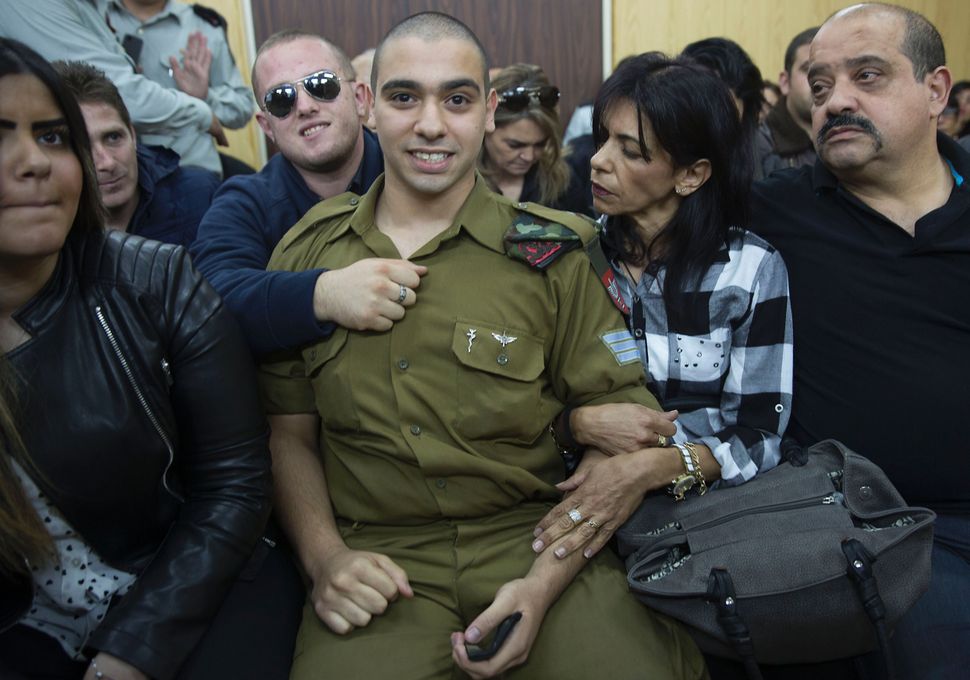 Last March, in my grandmother’s living room in the north of Israel, I was watching the evening news with my family. At the top of the hour, that night’s lead story came on, and the television screen filled with a grainy video from B’Tselem, an Israeli human rights group. The footage was clear: an Israeli soldier, whom we now know to be Elor Azaria, approached a disarmed and arrested Palestinian assailant, Abdel al-Fattah al-Sharif, and shot him in the head.

To my eyes, this was a summary execution in the streets of Hebron, full stop. My mom and sister agreed. “Murder,” we proclaimed.

However, the three of us have spent either all or half of our lives living in America, and some of those still living in Israel had a slightly different understanding. My grandma jumped in.

“I agree that this is an awful thing, and I think he should be in jail. But that Arab was trying to kill Jews! If he had the chance, he would’ve come at me with the knife.”

My grandma is not the first to assert that the experience of living in Israel lends Israelis insight that outside critics cannot understand. It’s a stereotype for Israeli Jews to tell Americans “You don’t live here, so you don’t know,” and Congressman Peter King (R-NY2) declared on Israel’s Channel 7 that “People in America just do not understand how dangerous it is to be Israeli in Israel.”.

The thing is, we do understand Israel, likely better than any other non-Israeli group in the world. As peoples, Diaspora Jews and Israeli Jews share a millennia-long history that diverges only in its last century. A history of persecution? Check. Expulsion and flight from native lands? Check. Hostility in gentile communities? Check. The Israeli mentality, full of fear of violence and remembrances of past persecution, is certainly familiar to many non-Israeli Jews.

As a result, by operating with a fundamental sympathy for Israel, the American Jewish community is in a unique position to constructively criticize Israel and hold it accountable to high standards of justice and ethical conduct. If American Jews, of whom 69% report an emotional attachment to Israel, stood up to Israeli actions when they contravened universal values and international law, no Israeli leader could brush them aside as anti-Semites or deranged college students. Rather, when American Jews speak, Israel would be forced to listen.

So why don’t we speak out more often? After all, a plurality of us opposes the settlements, and a majority feels that the Israeli government is not making a sincere effort to establish peace. Surely, Israel’s well-documented policies of military occupation, land dispossession, and largescale home demolition must not sit well with the 56% of American Jews who consider working for justice and equality an essential part of being Jewish. Though Benjamin Netanyahu deems himself “a representative of the entire Jewish people,” Israeli governmental policy does not seem especially reflective of American Jewish values, and we do Israel no favors by pretending otherwise. With American Jewish institutions like the Zionist Organization of America and the Jewish Federations of North America encouraging some of Israel’s most destructive policies under the auspices of being “pro-Israel,” American Jews risk enabling more war, violence and injustice.

The American Jewish community has the power to change this. By embracing our singular relationship with Israel, entailing both a root understanding of the Israeli reality and a firm set of values often contrary to Israel’s actions, we can effect positive change in a way no international body or student group can. American Jews who care about equality should be actively critiquing Israel’s myriad unjust policies, engaging with their local communities, supporting organizations that advocate for their values, and actively building a better and fairer Israel. After all, though we can’t fully inhabit the environment that creates Elor Azarias, we know enough to try and change it.

Daniel is a senior at East Brunswick High School in New Jersey. He’s an editor of his school paper and a member of Hashomer Hatzair, a progressive Jewish youth movement.