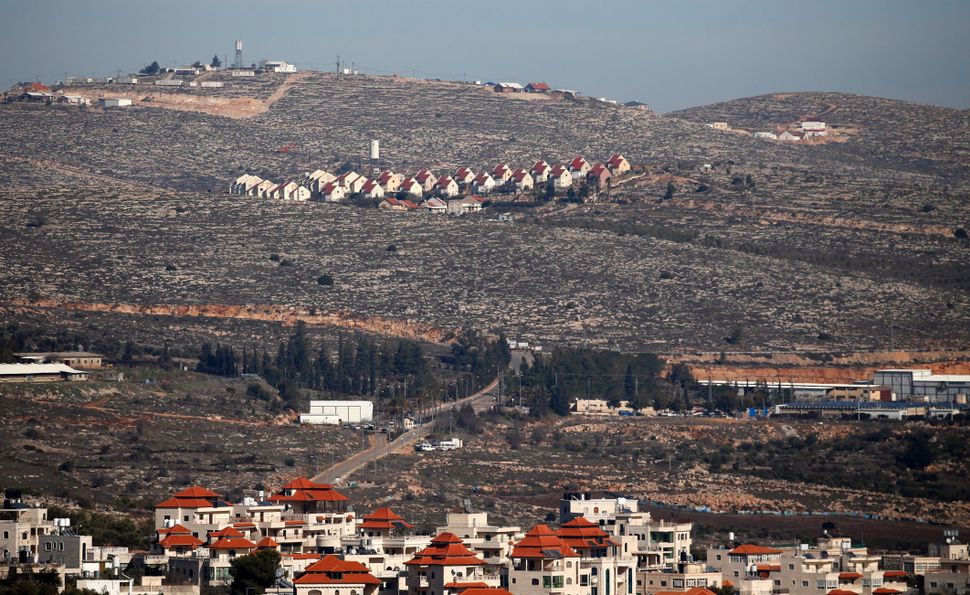 The Palestinian West Bank village of Turmus Ayya (foreground) and the Jewish settlement of Shilo (background). Image by Getty Images

I walked slowly under overcast skies up a slight incline in the northern Israeli-occupied West Bank to where a thin man with a pole in his hands appeared to be measuring the land. I wanted to ask him, as a reporter, what he was doing there.

“It’s an archeological dig,” he replied, without hesitation.

That was the 1970s, a time of rapid and highly controversial Jewish settlement in the West Bank, spurred after Menachem Begin came to power in 1977 and declared the captured area “liberated Israeli territory.” That “archeological dig” was Shilo. Today, Shilo, established in 1978, houses about 3,400 people.

The controversy over Jewish settlement expansion still is very much alive, perhaps more so in the era of President Donald Trump. Israel may be approaching a crossroad as Prime Minister Benjamin Netanyahu and the powerful settler movement backing him believes Trump would support what they envision as the Jewish state’s version of manifest destiny.

But the president’s irascible unpredictability should raise a yellow warning flag as Israel announced plans to build thousands of housing units in the West Bank and East Jerusalem and to erect the first new settlement in 25 years. The Knesset passed legislation to retroactively recognize the legality of about 4,000 West Bank settler homes.

Further, Israel’s far right pressed for annexation of a settlement city adjacent to Jerusalem, Ma’ale Adumim, and even of the entire West Bank.

Israeli annexation of territories seized during the 1967 war is not new. Israel annexed East Jerusalem, held by Jordan, immediately after the six-day conflict and annexed the Syrian Golan Heights in 1981. The international community regards annexation of occupied territories illegal.

“The current Israeli government was elected to act on the Jewish people’s right to build in all parts of our land and we must respect the will of the people who elected us for this purpose,” Deputy Foreign Minister Tzipi Hotovely said. But if the government acts hoping the mercurial Trump will support its desires, it had better think again. He has retrenched on giving Israel a blank check to build in the West Bank because settlements, he said, “don’t help the [peace] process.” He is to meet Prime Minister Benjamin Netanyahu Wednesday in Washington.

What does Israel want? One state? If so, it would include the more than 2.6 million West Bank Palestinians. With 1.8 million Arab citizens of Israel, the total Palestinian population in one amalgamated Israeli state would be 4.4 million.

Of the total 8.6 million Israelis, 6.4 million are Jews. How long would it take for Palestinians to outnumber Jews if the West Bank were added to Israel?

Israel’s far right seems to be taking a leaf from 1840s America, when politicians argued it was Anglo-Saxon heritage to propel U.S. expansion to the Pacific coast and Mexican land in the Southwest under the rubric of Manifest Destiny. It led to erasing many Indian lands, abrogating treaties and, in 1848, a war with Mexico.

A one state solution could end Israel’s peace treaties with Egypt and Jordan. It could create an apartheid state. And it could mean war.