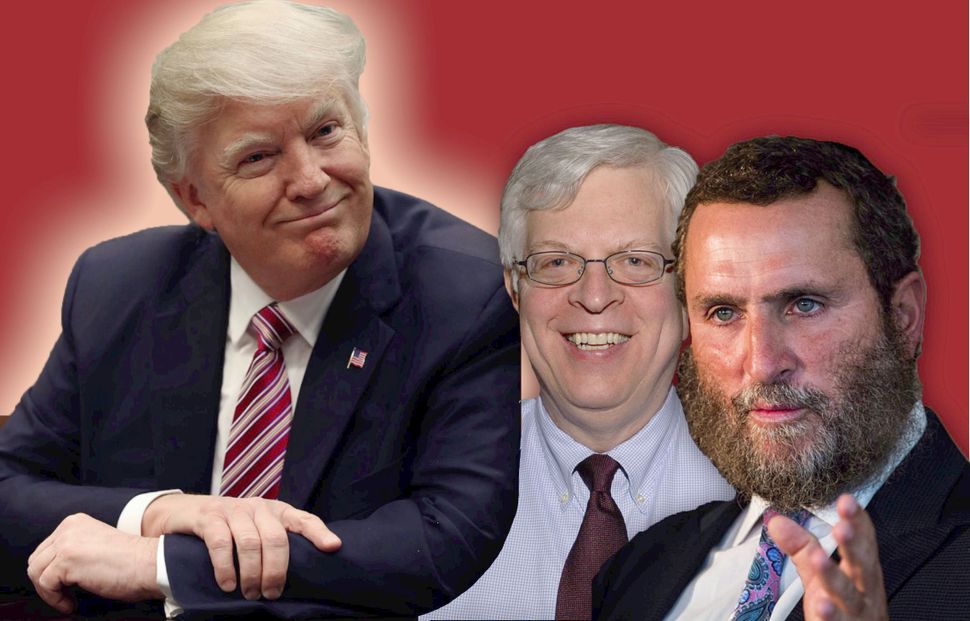 Jewish Conservative pundits who have long stood for family values and moral rectitude but now stand with Trump have revealed what apparently lurked underneath the whole time, in a manner no less maddening than the Evangelical Trump supporters who can lift their hand from a posture of prayer to shake the hand of a man who uses his to grab the genitals of women without their consent.

Two stand-out examples of this breed of hypocrisy are Rabbi Shmuley Boteach and Dennis Prager, both self-promoting “talking heads” claiming to be defenders of conservative values, Judaism, rationality, character and truth with a capital T. Both advocated voting for a lying, immoral, self-serving misogynist who exploited ties to white nationalists in order to get elected. What happened?

In Prager’s case, he is on record saying that his concern was preventing “corrupt” Hillary Clinton from being elected, as well as a general antipathy towards leftwing values and policies. He characterized Trump, incredibly, as the “lesser of two evils.” The enemy of his enemy was his friend. Prager chose an instrumental alliance with Trump in order to serve his own rapacious ego and to prevent an elite, mildly corrupt politician from getting into office and enforcing “leftwing policies.”

A President Hillary Clinton would have likely put into practice centrist neoliberal policies — but no matter. Prager is animated by a fierce, almost mythological belief in the evils of leftist identity politics and tortured by even the merest sniff of a critical attitude to the Zionist state (despite Clinton’s mainstream, hawkish stance on Israel). What animates Prager seems to be any appearance of an attack on what he holds dear — conservative family values, right-wing economic policies and Zionism. To protect these things, he has shown himself to be every bit as willing to make a deal with the devil as his white Evangelical brethren.

The devil in question has, we now know for sure, shown himself willing to destroy families, terrorize immigrants, refugees and travelers from Muslim countries, violate the principle of freedom of religion, threaten national security, defund science, the arts, healthcare and even, for heaven sake, Meals on Wheels, and threaten the land, soil and air of the U.S. (Prager doesn’t believe in climate change, so that concern wouldn’t make his radar). What does this “pragmatic” decision to back Trump say about Prager’s claims to be a staunch defender of moral absolutes?

As for Boteach, the spotlight-loving rabbi, who has written extensively on sexuality, the family and even why Jews should embrace the historical (not Christian) Jesus, has embraced Trump in a more lukewarm way, but embrace him he has. Even more troubling is his defense of Steve Bannon, the war-loving, Islamophobic, libertarian white nationalist. “Steve Bannon has shown great support for Israel & this administration promises to be very strong for the Jewish state,” Boteach wrote after he was criticized for tweeting out a proud photo of himself and Bannon.

Boteach seems to understand the core Jewish values of truth, justice and compassion. Yet he has shown by his actions that he is willing to throw those out the window for anyone who takes a hardline on defending Israel. Boteach, like Prager, has adopted a dangerous situational ethic with regards to Trump, which is staggering in its lack of consistency. This is a man who writes that he hopes the president will rescind his Muslim ban and the U.S. should “absolutely welcome immigrants, we are a nation of immigrants” while defending Bannon and advocating for Trump. Why? In the hopes the Trump administration will move the US embassy to Jerusalem, demand more from the Palestinians or or stop Iran from attacking Israel?

Aside from the fact that the Trump administration will likely show about as much competence negotiating Middle Eastern politics or going to war as Trump has in doing anything other than being a grifter, at what price, Zion? Is Boteach really willing to watch the U.S. go to the dogs if it means more military support for Israel? The majority of the U.S. Jewish community has shown that by and large it doesn’t agree, for which we can be thankful.

Boteach, Prager and other Jewish conservatives who have decided to embrace or normalize the Trump administration have sold their birthright for a mess of stew — and it’s not even stew, it’s a plastic replica with a Trump emblazoned spoon stuck in. In doing so they have disgraced Jewish values and Zionism, and history will judge them most unkindly. One can hope the shocks coming will provoke public repentance among them and others who have joined them in their cheap and dangerous bargain.

Ironically for Prager and Boteach’s misguided form of Zionism, the disregard for the global ecosystem that the Trump administration is instantiating in policy will certainly exacerbate climate change, a much bigger threat to Israel than the current Iranian government is likely to be. A heating Middle East will be one likely to face economic and agricultural crisis, severe water shortages, ecosystem destabilization, desertification and increased migration and warfare. Israel’s situation, while no doubt providing opportunities for leadership, will be precarious indeed. How viable the Zionist project will be in an overheating Middle East is anyone’s guess.