The Secret Jewish History Of The Atom Bomb 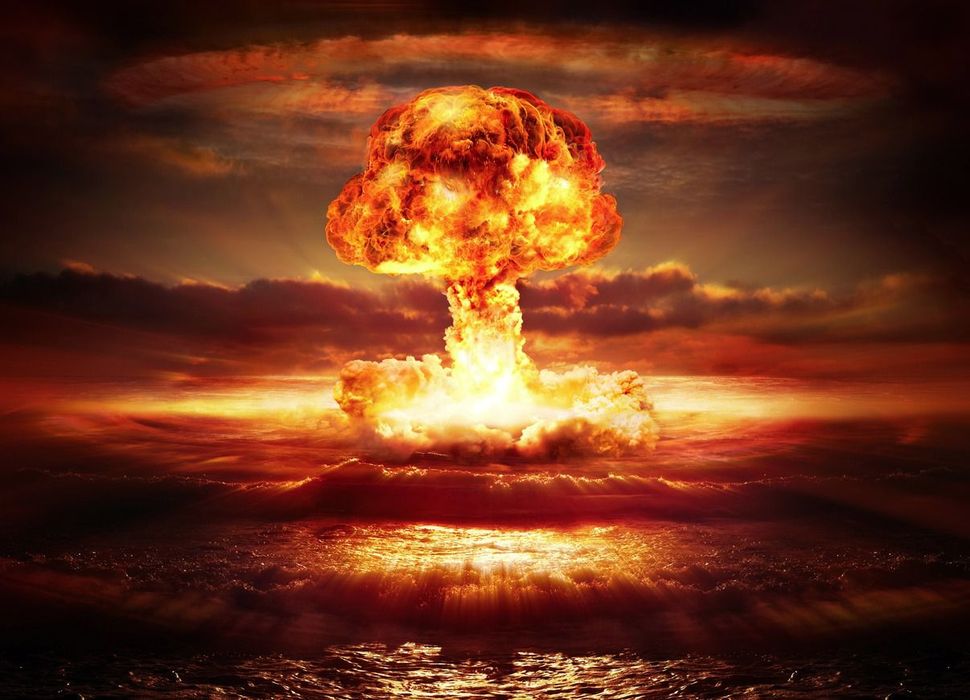 Lately, I’ve had nukes on the mind.

I began reading a Kurt Vonnegut novel this week because I think we are now living in one, and I need to plot strategy.

All of this was exacerbated Monday afternoon when a senior North Korean official said that the U.S had created “a dangerous situation in which thermonuclear war may break out at any minute.” Later North Korea said it would continue “weekly” missile tests and warned the US that any American plans to attack it would be met with a pre-emptive nuclear strike with “our own style and method.”

As is well known, several Jews were essential to the development of Nuclear weapons. The intellectual father of the bomb was Leo Szilard, a Hungarian-Jewish refugee from Nazism. Szilard conceived the nuclear chain reaction in 1933, and patented the idea of a nuclear reactor with Enrico Fermi, a physicist who had fled Mussolini’s Italy to save his Jewish wife Laura Capon.

In December 1938, Otto Hahn and Fritz Strassmann sent a manuscript to Naturwissenschaften reporting that they had detected the element barium after bombarding uranium with neutrons. Here too Jewish and anti-Nazi connections abound: Hahn was a vocal opponent of Nazism (praised by Einstein as “”one of the very few who stood upright and did the best he could in these years of evil”) and Strassman hid Jews during the war.

Lise Meitner and her nephew Otto Frisch correctly interpreted Hahn and Strassman’s results as being due to the splitting of the uranium atom. Meitner was a Viennese Jew, and her Austrian nephew Frisch was Jewish as well. Frisch then collaborated with Rudolf Peierls to designed the first theoretical mechanism for the detonation of an atomic bomb in 1940. Peierls was a Jewish refugee from Germany who worked on the Manhattan Project under its team director, J. Robert Oppenheimer, who was a Jew born in New York.

In the February 1940 Frisch–Peierls memorandum they stated that: “The energy liberated in the explosion of such a super-bomb…will, for an instant, produce a temperature comparable to that of the interior of the sun. The blast from such an explosion would destroy life in a wide area. The size of this area is difficult to estimate, but it will probably cover the center of a big city.”

In August 1939, concerned that Germany might have its own project to develop fission-based weapons, Szilard had sent a letter, signed as well by Einstein, to Roosevelt warning him of the threat of a Nazi bomb. Roosevelt responded by setting up the Uranium Committee. It was not until the Japanese attack on Pearl Harbor in December 1941 that the U.S. decided to seriously commit itself to the bomb.

As a Jew, it troubles me that there were so many Jews involved in the creation of the bomb, so many that it is tempting to view it as a Jewish weapon. More deeply true though, is the ironic, and even tragic reality that to a significant degree it was an anti-fascist weapon born to prevent mass murder and tyranny. In the deepest sense, the creation of nuclear weaponry is simply the product of the ever-escalating use of human technology for aggression and defense. Yet the specific cause of the bomb’s creation was the deadly dance between the Nazis and those who opposed them. Perhaps not surprisingly, Jewish scientists played a major role.

Since then nuclear weapons have been used twice, both times by the United States against Japan. On August 6, 1945, the U.S. Army detonated “Little Boy” over the Japanese city of Hiroshima; three days later, on August 9, they detonated “Fat Man” over the Japanese city of Nagasaki. The bombings resulted in the deaths of approximately 200,000 civilians and military personnel.

According to Paul Ham writing in Newsweek, on 25 October 1945, Truman met with Oppenheimer. The physicist wanted to persuade the president to support international controls on nuclear weapons. Truman was dismissive, gruffly insisted that the Russians, the major post-war threat, would never develop nuclear weapons. Oppenheimer said, “Mr. President, I feel I have blood on my hands.” Truman, who later referred to Oppenheimer as a “cry baby scientist,” ended the meeting and told the Secretary of State never to bring “that son of a bitch in this office ever again.”

As Ham points out, Oppenheimer was consumed not so much by remorse for the wartime deaths of the Japanese as for “the deaths of millions of individuals in some distant apocalypse”.

As Paul Mason wrote in the Guardian Monday, “I don’t wish to alarm you, but right now the majority of the world’s nuclear warheads are in the hands of men for whom the idea of using them is becoming thinkable.”

Having Kim Jong-un and Donald Trump at the helm of nuclear arsenals is terrifying. On 22 December last year, Trump and Putin both announced that they were going to expand and update their nuclear arsenals. Trump is just the kind of insane asshole to enjoy terrifying somebody into submission with a big bright explosion (see MOAB). As Mason points out, in Putinland, which Trump admires so much, “every major Russian wargame ends with a “nuclear de-escalation” phase: that is, drop one and offer peace”.

Jong-Un, unhinged tyrant son of an unhinged tyrant father, leads one of the truly evil empires on the planet, home to the world’s largest and most horrifying regime of concentration camps. The North Korean government has long relied on a policy of hyper-militarist posturing and the willingness to combine insane risks and total disregard for human life as their strategy for staying in power.

With regards to North Korea, the current hope seems to lie with China, North Korea’s major ally and trade partner. Even if US-North Korea tensions calm for now, however, humanity has one hell of a restless beast chained in the basement. Is it ironic that a weapon developed to stop a genocidal, psychotic government was then used to kill massive numbers of innocent Japanese civilians and might one day be used by an unhinged megalomaniac to kill untold numbers of people in South Korea, Japan, or even the US?

It is hard to sustain appropriate levels of panic over long periods of time, but we should definitely not lose our sense of urgency about the grave threats Trump poses in this context. It is increasingly clear that Trump is a semi-literate, aging grifter with creeping dementia who is as qualified for his job as he would be to man a mission to the moon. Asked in January what her major fear has been since Trump’s election, Russian dissident in exile Masha Gessen said it was nuclear holocaust. “There’s a Russian joke,” she told Samantha Bee. “We thought we had hit rock bottom, and then someone knocked from below.”

One can always hope in Ivanka, I suppose, and what a pathetic and desperate thought that is. Alternately one can pray for wise heads among his military advisers to prevail, but so far such imagined sagacity has not stopped the US Army from killing scores of Iraqi and Syrian civilians as well, last week, as eighteen of its own allies. When it comes to Trump, time is not on our side and the sooner he is impeached or the congress is stacked against him, the better. Dealing with a madman like Jong-Un, hell-bent on shoring up his brutalist, illegitimate government at literally any cost, will require an American leadership of rare insight and strategy.

What is there to do but work for American regime change and hope for Chinese diplomacy to prevail for now? Leonard Cohen was asked several years ago for his advice about how to prepare for the future whose nature he had so aptly summed up as “murder”:

“My other piece of advice is: ‘make yourself strong and cheerful’.” That advice could just as well as come from Vonnegut. Whatever novel we’re in, I just hope it’s not Cat’s Cradle.

The Secret Jewish History Of The Atom Bomb