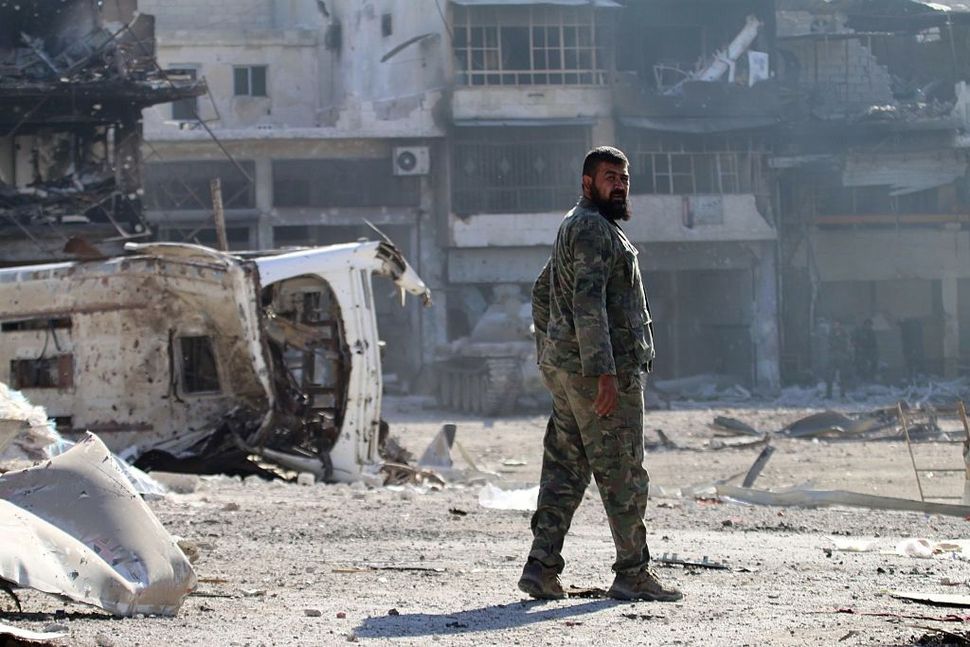 Recently, I signed a letter, circulated by a rabbi whom I revere, who will, I think, be remembered as one of the important rabbis of our generation. I was in august company; the letter was also signed by deeply respected teachers and colleagues. Immediately, equally respected colleagues and friends sent emails asking (in more polite terms): WTF? Having mostly been off of social media for the Passover season, I’ve had a quiet time out to think about what I’ve done. And I’m sorry.

Just before Passsover, nauseated at the massacre of civilians perpetrated by Syrian dictator Bashar al-Assad, I signed a letter which called on Donald Trump to “Order targeted airstrikes on Assad regime air facilities, jetways, and fix-wing and rotary aircraft so as to prevent the regime from carrying out further chemical attacks with nerve agents.”

And then, son-of-a-gun, he did it. And, I’ve been marooned on the Island of Dread and Regret ever since. While I don’t think that our letter had anything to do with the decision (or, probably, ever came to his attention), I’ve been increasingly regretful that I put my name to something that offered the tiniest bit of cover or support for 45.

So what’s my problem? Am I just upset because a president I don’t support actually did something admirable and I don’t want to admit it? No. But, in an oblique way, that’s getting warm.

See, here’s the thing: I thought we were pushing against a closed door and that we would be lucky to get any presidential acknowledgment of wrongdoing by the Assad regime. That’s because I made the mistake of taking Trump at his word. Just a week previous, his administration had signaled acceptance of Assad’s continuing rule in Syria. The administration is still being investigated for illicit ties to the regime of Vladimir Putin, Assad’s sponsor. I figured we were shaming him for his consistent support for brutal dictators, like Egypt’s Abdel Fattah el-Sisi, like Vladimir Putin and like Assad himself.

Then he did a 180 away from his own policies.

After years of urging President Obama not to take military action in Syria, immediately after assuring Assad that he was welcome, as far as the US is concerned, to do whatever he wanted, Trump bombed Iraq….er Syria. While enjoying a mind-blowingly good piece of chocolate cake. Because of an action on Assad’s part that was completely in character and entirely predictable?

Three possibilities suggest themselves, and I don’t know which is scarier: 1. Our current president really is naïve and uninformed enough to be shocked at learning that the Assad regime would murder “beautiful babies.”

2. This is a bit of political theatre cooked up between the administration and the Putin regime (who were warned in advance) and the Assad regime (also warned). Or (most likely),

3. This guy is completely erratic, has no policy, and has no frikkin idea about what he will do next. And he wields the mightiest arsenal this planet has ever seen.

• There are some war crimes, such as deliberate massacres of civilians, that demand a response from the world.

• “The world” is a mashup of power relations both economic and political, ideologies, alliances and interests. No one is disinterested. Still, when it comes to genocides, massacres, torture, created famines and similar atrocities “we” have to draw lines somewhere. That is what the UN, an institution for which, until recently, Trump has expressed nothing but contempt, is supposed to be for. (In reality, the United States and Russia can each end any initiative before it begins).

• Resistance is resistance and it’s not compatible with respectful petition (This is the most embarrassing part of all—I should not have forgotten that). The action for which we were calling would have been appropriate coming from a president of intelligence and discernment, one who had done everything possible to see that it didn’t come to this (Oh, Barack Obama, where are you now?). We behaved as though such a person sat in the Oval Office because, well, because that’s what was needed, you see, and I thought it was a neat rhetorical jab to address its current occupant as though he were such a person. I was being too clever by half.

•Now that we have officially owned our share of the wreckage, it’s time to give the Syrians safe passage to our country. No more excuses.

Unlike some of my friends on the left, I no longer assume reflexively that no exercise of American military power can ever be justified. Not after the former Yugoslavia where, if anything, we were a little late in bestirring ourselves. Of course, as various correspondents have pointed out, that was not only a UN affair, it was also a project of NATO (another institution for which Trump has discovered belated respect), one that was supported tepidly by Congress.

Generally, though, there is much to be said on the side of those who resist any mobilization of the American imperium for any purpose. Look at Iraq: Saddam Hussein was as brutal and evil as is Assad, but removing him did not heal or stabilize Iraq; all we did was redistribute the pain. We should always ask who stands to gain (multi-national oil interests and the military industrial complex come to mind).

Something was done and nothing is better. Assad’s regime remains in power, and even the airfield is still viable. Meanwhile, our attention has been diverted from the issue of the Trump administration’s collusion with Russian intelligence operatives and from their steady removal of federal protections from racist and violent police departments, union-busting, pollution and discrimination based on gender and sexual orientation. And they lost a warship for a little while.

Again, I made a mistake, and I’m sorry. I’m learning how it’s possible to be filled with weariness and dread at the same time. It’s going to be a long four years.