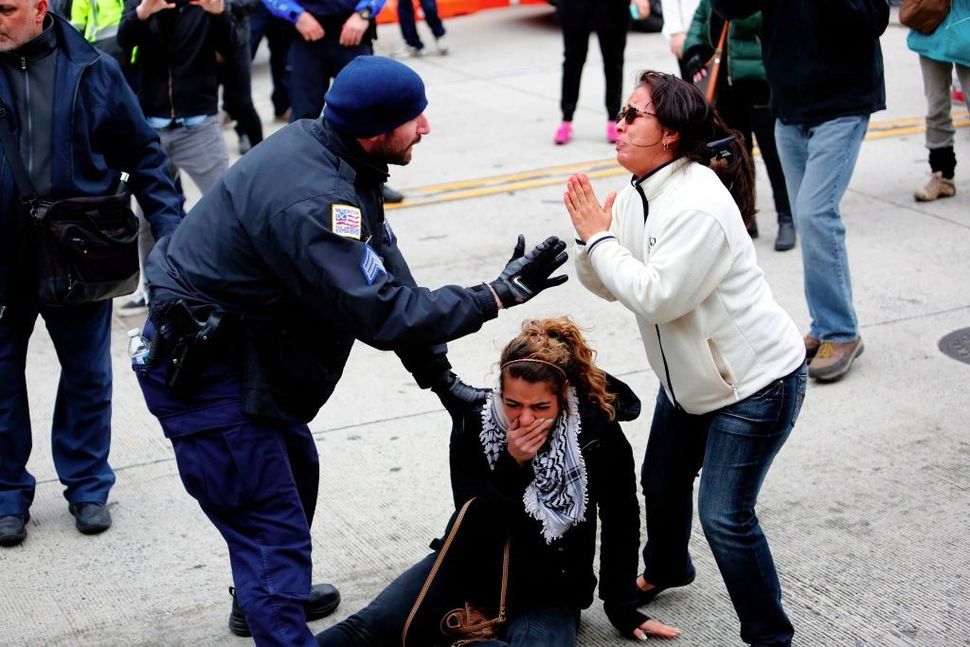 This past March at the second annual “Ambassadors Against BDS” conference at the UN, South Carolina State Representative Alan Clemmons called me anti-Semitic. I was there with ten other J Street U students to discuss progressive, pro-Israel and anti-occupation alternatives to BDS. Hundreds of people in attendance stood up and applauded Clemmons’ accusation, and then many joined in the attack.

I was told that I was going to hell and that I should move to Gaza and get my head chopped off. The women in our group were told to become sex slaves and try female genital mutilation. Finally, after what felt like an eternity, the crowd stopped berating us, and the panel continued. Robert Singer, the moderator of the panel and CEO of the World Jewish Congress, joked that after a long, tiring day the crowd had finally come alive.

In the days following the conference, numerous Jewish organizations condemned Clemmons’ words specifically and affirmed their acceptance of J Street U as an important part of the Jewish community. Their statements have been reassuring, and I’m personally grateful for the support, but ultimately, the responses needed to go further. These organizations needed to address the fundamental reason why something like this incident was allowed to occur in the first place.

For far too long, American Jewish organizations have given extremist voices a seat at the communal table because they happen to hold seemingly “pro-Israel” politics. And while what happened at the UN was deeply painful, it was sadly just one of many acts of hatred, bigotry and violence committed by pro-Israel voices in our community in recent weeks and months.

Just days after the UN conference, a staff person from the Zionist Organization of America hacked into the email list of the J Street U chapter at the University of Michigan and sent a message comparing students to Nazis. The ZOA also happened to co-sponsor the “Ambassadors Against BDS” conference, and its President, Mort Klein, addressed a session specifically focused on combatting BDS on campus. His message to students was extreme as well — he posited that the occupation is a lie and that Jerusalem is not a holy city to Muslims.

At this year’s AIPAC conference, members of the Jewish Defense League (JDL), a violent, far-right organization, brutally attacked two protesters. While many Jewish communal organizations have condemned this violence, AIPAC itself has failed to denounce the JDL’s actions. The JDL also showed up at last year’s Chicago Jewish Festival, although this time they were stationed at an official booth. That’s right — the JDL, characterized by the FBI as a terrorist organization, was an official participating member in the annual festival.

Just this past week, White House aide Sebastian Gorka, a man with extensive ties to anti-Semitic, Islamophobic, and even pro-Nazi organizations spoke at the Jerusalem Post Conference alongside numerous Israeli politicians and American Jewish leaders.

If you look closely, the presence of extreme hatred directed toward Muslims, Arabs, and liberals in general is far too common in the Jewish community, and I could continue on listing examples. However, the question in front of us isn’t what or where or who — it’s why.

Why doesn’t AIPAC explicitly denounce or distance itself from the JDL, or the Center for Security Policy, another Islamophobic hate group that received $60,000 from AIPAC last year? Why does Hillel International work closely with the ZOA on campus? And why did Hillel co-sponsor the “Ambassadors Against BDS” conference?

The thread that connects these stories is that every group or individual referenced above is proudly “pro-Israel.” Because the ZOA, for example, is regarded by much of the American Jewish community as pro-Israel, they are happy to ignore its other disturbing qualities, namely racism and xenophobia. This phenomenon can be described as “pro-Israel at any cost” politics. In other words, American Jewish leaders can forgive Islamophobia, homophobia, and other forms of bigotry amongst their ranks as long as the individuals or groups show strong support for Israel.

Many will shrug off this dynamic by repeating the age-old adage that “politics makes strange bedfellows,” but such an attitude has devastating consequences. First of all, the “pro-Israel” politics that many of these groups and individuals represent are actually deeply damaging to Israel’s future, as they seek to destroy a two-state solution by expanding settlements and entrenching the occupation. Regarding this approach as “pro-Israel” is a misnomer.

Second, when young people see the American Jewish community normalizing extremists, or Benjamin Netanyahu and Donald Trump trading compliments back and forth on Twitter, their perception of what it means to be “pro-Israel” is altered. There’s a danger that they’ll stop seeing supporting Israel as advocating for the future of the Jewish state and instead come to view it as aligning oneself with the most hateful forces at work in the United States today. Now why would a progressive college student like me want to do that?

To address the consequences of pro-Israel at any cost politics, the American Jewish community must finally confront the extremism flourishing in its midst and lift up and engage truly progressive, pro-Israel voices. It’s not enough for communal institutions to address isolated incidents, as many did after I was called anti-Semitic at the UN. They must wholeheartedly reject the “pro-Israel” voices in our community whose words and deeds run counter to the two-state solution and to the sacred Jewish values of tikkun olam (repairing the world), chesed (kindness) and tzedakah (charity).

If we don’t, we’ll continue to drive away my generation of American Jews and hasten the end of Israel as a Jewish and democratic state — and we’ll have only ourselves to blame.