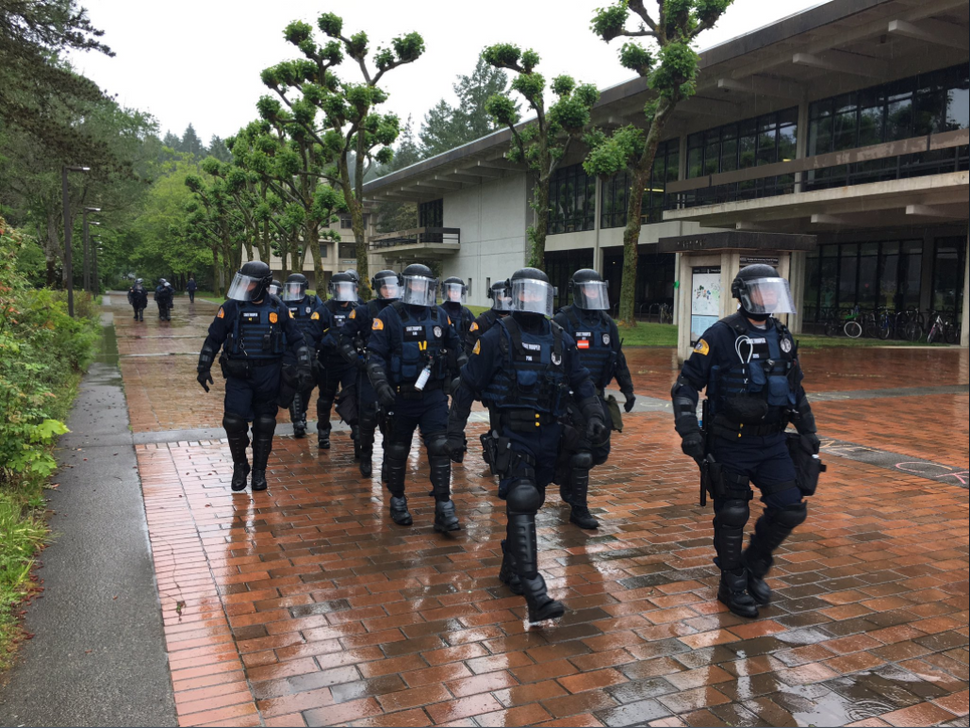 At The Evergreen State College in Olympia Washington, an angry mob descended upon Bret Weinstein, a professor of biology and evolutionary studies. As Weinstein recounts:

In a widely disseminated video of the first recent protest on May 23, an angry mob of about 50 students disrupted my class, called me a racist, and demanded that I resign. My “racist” offense? I had challenged coercive segregation by race. Specifically, I had objected to a planned “Day of Absence” in which white people were asked to leave campus on April 12.

On this Day of Absence, unlike in previous years where people of color removed themselves from campus to highlight the importance of their presence (“white” Jews like Weinstein having been conspicuously excluded from this tent), in 2016, organizers “invited” white persons to leave campus. Weinstein politely but cogently declined this directive via an email sent to the entire staff and student body of Evergreen. The result was an angry mob that forced the professor to hold his class in a nearby park off-campus. As the New York Times reported, “the final days of the term [at Evergreen] were marked by riot police officers, barricades and metal detectors.”

On June 7, this letter was posted on Medium by an anonymous group of Jewish students at Evergreen. It accuses Weinstein, a progressive Jew, of “positioning himself as a Jew to invalidate the claims of racism being raised against him” and using his “invocation of his Judaism as a prop upon which his anti-black language and behavior has rested.” It also accuses Weinstein of using his Jewish identity to “support white supremacy.” How is it that Weinstein’s Jewish heritage, which he never explicitly invoked, now finds itself in the center of a conflict about privilege and mob mentality?

For Jews, the Evergreen incident underlies a profound psychological anomaly that is at once new and ancient. Ladies and gentlemen, welcome to the Jewish question in the age of identity politics. On college campuses, a spectre of hostility is raising its ugly visage between the proponents of identity politics, intersectional social justice and Jewish civilization. In identity politics, these attacks emerge thinly veiled under the new, Orwellian sheen of social justice on one side and the increasingly visible white nationalism at the other. At the speartip of those hostilities lies the reasoning of “privilege,” the thrust of which violently excludes both Jews and reason itself from the identity politics on the right and left.. Here, the safety of Jews to determine their own identity increasingly finds itself in a minefield of anti-Semitism, illegitimacy and resentment.

This use of privilege, vis-a-vis Jews, relies on tropes so redundant and ancient you’d almost wish the anti-Semites would start finding new material. Claims of privilege and Jewish manipulation have provided the eternal weapon against the Jews; anti-Jewish antagonists weaponize privilege until Jewish ashes rise up from ovens. As Hitler, dispensing with reason and Jews together, best articulated: “the anti-Semitism of reason” must lead “to the systematic combating and elimination of Jewish privileges.” Through arguments of Jewish privilege, Nazis boycotted, divested from and sanctioned Jewish businesses — It was privilege that the Communist Russians decried as they murdered, deported and redistributed the wealth of “corrupt bourgeois (Jewish) capitalists” — claims of privilege allowed Iraqis to violently expel and appropriate the wealth of Iraqi Jews in an age where most of Iraq’s banks and transport companies relied upon them — it was privilege that the Spaniards reviled as The Church tortured and murdered Jews throughout the Inquisition. The church propagandist Andres Bernaldez put it best nearly half a millenia ago:

“And in the time when this heretical iniquity flourished, many monasteries were violated by their [Jews] wealthy men and merchants.”

”And usually, for the most part, they were usurious people, of many wiles and deceits, for they all live by easy occupations and offices, and in buying and selling they have no conscience where Christians are concerned.”

“ Many of them in these realms in a short time acquired very great fortunes and estates, since they had no conscience in their profits and usuries, saying that they only gained at the expense of their enemies”

It is privilege which signalled the death knell for civilization and reason in all of these cases. The Jewish question disguises the human one — it is a microcosmic metaphor for civic life.

Given all of this, how does it make sense to call Jewish accomplishment privilege, when “privilege” is weaponized against them for purposes of genocide and to deconstruct society? By no coincidence, in those moments, reason and the rule of law imploded and all rationality transformed into unrestrained hatred. Are we supposed to be grateful for the “privilege” of occasionally and temporarily passing as our persecutors until we are outed as Jews? When the value of Jewish resources exceeds the value of Jewish life, the tables have almost always turned toward genocide. The word “privilege” appears like a heralding angel to announce its arrival. What a privilege.

What is eminently clear, given our history, is that projections of “privilege” historically constitute the exact mechanism to deprive Jews of needed protection. Furthermore, the mechanisms that historically deprive Jews of protection share hostility toward reason and civilization itself. From the standpoint of intersectional justice, the logic therefore follows exactly: The Jewish identity comprises the unique intersection for which the leveling of privilege itself underlies a genocidal form of oppression. The genocidal label of privilege follows all Jews, whatever their appearance and in every land they have lived and thus, this libel rests on their collective identity as Jews, as such… not on the color of their skin.

Joel is a psychologist and neuroscientist, entrepreneur and writer, with diverse pursuits, ranging from crypto-currency to philosophy of mind and the relationship between technology, virtuality and the ethics of a self.