Jews Must Defend The DREAMers 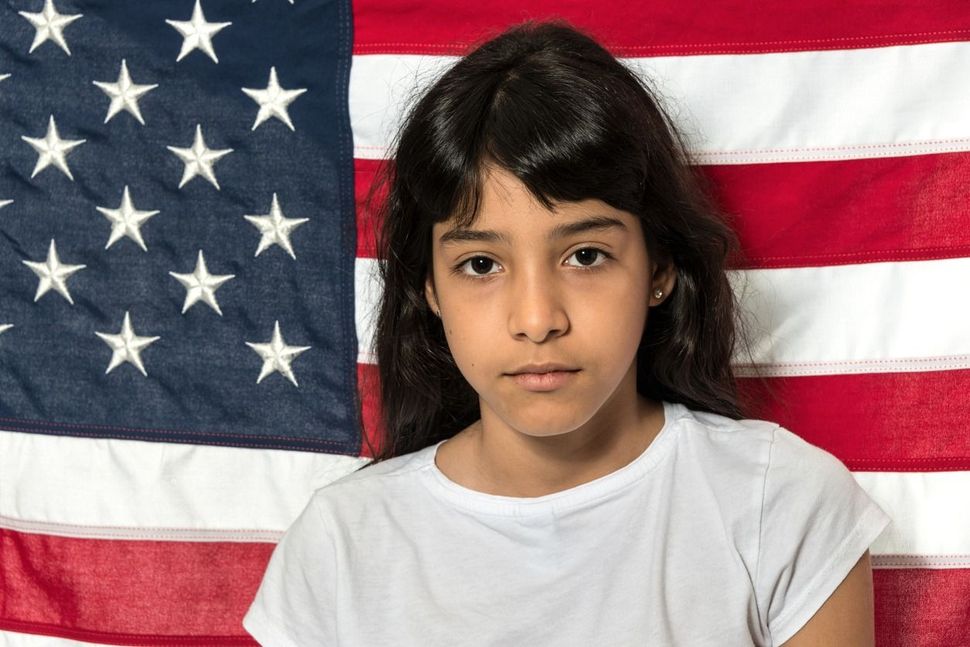 On September 5, after weeks of speculation, the Trump Administration announced it will begin to phase out the Deferred Action for Childhood Arrivals (DACA) program, an Obama-era initiative meant to stave off the deportation of millions of undocumented individuals brought to the United States as children. The demise of the program ends the legal protections granted to around 800,000 “DREAMers” who, thinking that they had a reprieve from official action against them and their families, registered as undocumented with the government. Their future—and the future of America’s commitment as a haven for immigrants—is now a nebulous proposition.

This signal from the Trump Administration is undoubtedly part of an “America first” agenda. But more so, it is another example of the abject cruelty and mendacity of the axiom.

Let there be no mistake. We are talking about people brought to the United States as children. This is not a sanctioning action against violent criminals. The government is striking fear into the hearts of college students and army personnel. These are computer engineers and civil servants, these are journalists and activists. These are our friends and neighbors.

Their fear is warranted. And it should shake us to our cores. 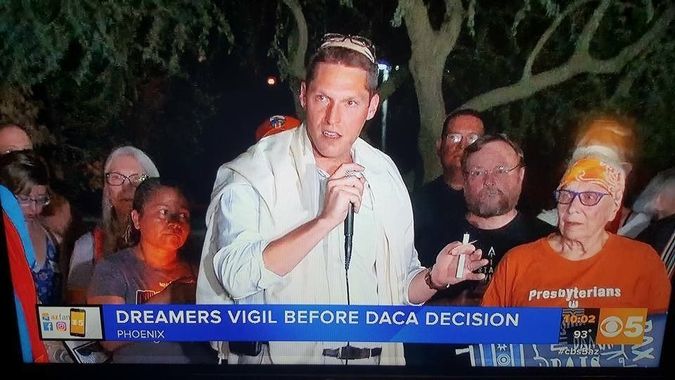 Even Republican Senators have acknowledged that this new policy agenda crosses a moral line. Senator John McCain, one of the Senators of the state in which I reside, writes:

President Trump’s decision to eliminate DACA is the wrong approach to immigration policy at a time when both sides of the aisle need to come together to reform our broken immigration system and secure the border. I strongly believe that children who were illegally brought into this country through no fault of their own should not be forced to return to a country they do not know. The 800,000 innocent young people granted deferred action under DACA over the last several years are pursuing degrees, starting careers, and contributing to our communities in important ways.

While President Obama’s DACA program comprises the largest number of people affected by an executive order regarding immigration policy, it is decidedly not without precedent. Executive orders to protect undocumented immigrants have been issued by seven Presidents on eleven occasions since 1961. According to the Pew Research center, these orders covered the gamut of people needing protection, including Cubans, Haitians, Chinese, Nicaraguans, Salvadorans, and many others. While President Obama’s DACA program comprises the largest number, it is decidedly not without precedent. As for legislation, in 1986 Congress passed the Immigration Reform and Control Act, which President Ronald Reagan signed. With a stroke of his pen, President Reagan — no liberal — provided a path for 2.7 million undocumented residents to get a green card and a chance at citizenship. Unfortunately, over time, a hard-core conservative rump faction of politicians (including then-Senator Jeff Sessions) came to oppose any effort to allow undocumented citizens to have a path to citizenship, culminating in the Senate’s refusal to consider President George W. Bush’s proposal to reform immigration policy in 2007. In 2012, President Barack Obama, frustrated by the intransigence of a lackadaisical do-nothing Congress, issued an executive order establishing DACA, allowing children of those who entered the United States illegally to apply to have temporary relief from deportation.

Then, after years of Congressional resistance to any change, President Obama issued the executive order expanding DACA in 2014, shielding millions of young Americans who had been brought to America as children from being deported.

DACA wasn’t meant to be an end-all solution, but to be the bridge between what the executive branch could do without legislation. To that end, it’s scope was constrained. To qualify under DACA, applicants must have arrived in the United States before 2007 and must have been younger than 16 on their arrival. They also cannot have any serious criminal history. Studies have shown that about two-thirds came to America at age 10 or younger, and more than a third were younger than 6, so they little memory of their former country. In addition, it appears that those who applied for the DACA-protection status have a higher labor participation rate than the general American population. It should be noted that while the majority of those in DACA come from Mexico, there are also thousands of people under the program who originally immigrated from South Korea, the Philippines, India, and even Poland.

Throughout Jewish tradition, isn’t the God of Israel described again and again as One who loves the immigrant? Surely, the travails of Jewish history inform the need for an involved Jewish response to the cowardice and chicanery of this Administration? Indeed, the ultra-nationalists who show no compassion for immigrants reject the God who dwells within the depths of Torah.

On a more secular level, we know that the DREAMers are contributors who bring great benefit to society. And while the tangible inaction to challenges such as climate change, income inequality, and healthcare reform may cripple the vitality of this nation, surely children attending college or fighting our wars do not. For those that believe that they do, I lament this hardheadedness. I lament this rejection of American values; religious values; humanity.

We must remember the timeless rabbinic teaching: “Do not judge your fellow until you stand in their place” (Pirkei Avot 2:4). We must not attack undocumented residents with the harmful, hateful rhetoric that many use today as they are stuck in a challenging predicament that few can related to. In their stead, the rabbis even promoted immigration: “He who has not made good in one place and fails to move and try their luck in some other place has only themself to complain about” (BT Bava Metzia 75b). One cannot remain stuck in an underprivileged region if it is a clear stumbling block to oneself and one’s family to achieve their best selves.

In the Torah, there is a positive commandment to love the foreigner in our midst (Deuteronomy 10:18), and a negative commandment against oppressing or perverting justice for them in any way (Exodus 22:20; Deuteronomy 24:17). The rabbis elaborated on this prohibition: “You shall not wrong or oppress the stranger, for you were strangers in the land of Egypt. You shall not wrong with words, and you shall not oppress financially” (Mekhilta d’Rabbi Yishmael Mishpatim). We not only owe them basic human rights, but we also have specific religious obligations to go above and beyond to protect these people from harm. We should be grateful that America is a desired home for those fleeing poverty, war, famine, genocide, Holocausts, and more. We should be proud of what this great nation has have to offer.

Thus, our responsibility to the vulnerable immigrant (and heroic journeyer) requires that we honor the image of God in all people. Perhaps Emmanuel Levinas, the French Talmudist and Jewish philosopher, said it best: “The respect for the stranger and the sanctification of the name of the Eternal are strangely equivalent” (“Toward the Other,” Nine Talmudic Readings” 27). In a moving post that has thankfully gone viral, Professor Susannah Heschel writes about her reaction about the announcement. She wrote:

In March of 1938, Poland passed a law that would withdraw the citizenship of Poles who had been living outside the country for five or more years. The Nazi Reich arrested and expelled Polish Jews in late October, including my father, Rabbi Abraham Joshua Heschel, who was living in Frankfurt at the time. The Jews were held in a no man’s land between Germany and Poland in terrible conditions. I remember that vividly when I think of the US expelling human beings, people who have built a life for themselves in this country, who are enhancing our country with their presence. Raise your voices Jews! The revocation of DACA cannot be permitted and the immigration rulings of the past months must be repealed.

These are wise words for perilous times. To different degrees, we are all plagued with xenophobia. But when so much is at stake for others’ lives, each of us has holy work to do leading up to Rosh Hashanah to ensure that we uproot these evils from our souls. Therefore, for those who refuse to stand idly by, it is now our obligation to hold one another even closer. It is our obligation to leverage American Jewish power and privilege to stand with the most vulnerable. It’s essential not to isolate the issue of the 800,000 Dreamers but contextualize it within the larger issue of the eleven million people who now reside with us. We can’t win through piecemeal efforts. We need comprehensive immigration reform. And we need it NOW! We should promote our opinions about DACA and advocate for Dreamers, but also try to tie these issues back into the larger narrative construct. We were all immigrants; we should never forget that. It is our obligation to fulfill the timeless words of our Torah.

Thus, now is the time to hear the eternal calls of our religious traditions and our human conscience to ensure the dignity of all humans is protected. Providing a pathway to citizenship for undocumented immigrants currently in the United States is but one step, but at the present time, it should be our focus. We are long overdue but sure to prevail since our commitment is steadfast and the winds of justice are on our side. May we not fail the DREAMers. And may we never give up the dream.

Jews Must Defend The DREAMers