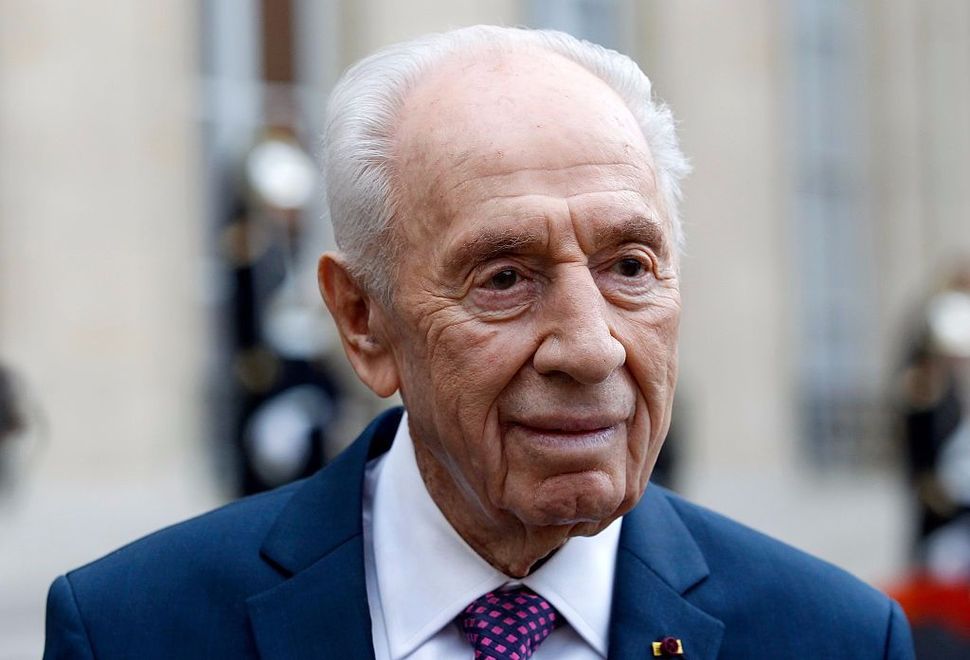 Shimon Peres’s story offers a compelling argument for the indispensable role of leadership, a quality notably absent from the world stage today. Indeed, the first anniversary of the Israeli statesman’s death on September 28 can serve as an important lesson on the potential of those with access to power to shape events, even amid serious constraints.

Peres had always been a “doer” with an uncanny ability to translate even the most fanciful ideas into reality, refusing to allow obstacles of any kind to derail his plans. While he was not always successful, he never stopped pursuing his ambitious goals. In the end, both his influence and accomplishments far outweighed his failures.

In late-December 2015, I interviewed the recently-retired Peres, my final encounter with the man I had studied and written about for many years. I was particularly interested in his reflections on the presidency, his last hurrah in an illustrious career spanning seven decades.

In theory, the presidency should have been Peres’s easiest position out of the many roles he had held in public life. As Head of State, he was expected to welcome foreign dignitaries, represent Israel overseas, participate in pleasant ceremonies, deliver unifying speeches, and set aside time for photo-ops with numerous other heads of state and celebrities with whom Peres was well acquainted – basically, all the glory and pomp without the headaches. Yet the presidency was in other ways Peres’s most precarious position yet. How would an ambitious elder statesman with well-formed – and well-known – political opinions, who has held every senior role in government, make his mark in a position designed to be ceremonial, free of partisan politics? “The president represents the state of Israel,” he told me, noting the vagueness of his job description. “Ambiguity plus chaos equals the best chance to do something,” he said.

Throughout his career, Peres had interpreted the challenges he faced as opportunities waiting to be exploited. He was prepared to do the same in his highly constrained role as Head of State.

It was Peres’s creativity, boundless energy, and dogged determination that, in the 1950s, enabled the young director-general of the ministry of defense to forge a strategic partnership with France, dramatically altering the balance of power in the region in Israel’s favor. Despite significant hurdles – financial difficulties, domestic opposition, foreign objection, and an unstable and divided French Fourth Republic -– Peres’s unorthodox diplomacy yielded massive quantities of high quality arms, as well as a powerful nuclear reactor, for the young Jewish state. In a short period of time, Israel was transformed from a weak, vulnerable, and isolated country into a regional superpower. Peres’s activities in France had irked his more senior colleagues, including Foreign Minister Golda Meir, who accused him of conducting an independent foreign policy. However, Prime Minister and Defense Minister David Ben-Gurion gave his protégé his full backing because Peres could be counted on to deliver the goods.

When Peres assumed the presidency fifty years later, then-Prime Minister Ehud Olmert had come closer to a peace agreement with the Palestinians than any of his predecessors. His clandestine talks with Palestinian Authority President Mahmoud Abbas came to a halt in September 2008, after Olmert made an offer to Abbas to which he never got a response. It is possible that Olmert’s legal woes, which had significantly weakened his domestic political standing, deterred Abbas from accepting the most generous offer ever made by an Israeli leader. According to Peres, however, Olmert also made two serious mistakes: mishandling the issue of Jerusalem -– Peres believed Olmert prematurely gave up control of Jerusalem’s Old City – and not allowing Abbas to study his proposed map. Olmert’s legal troubles led to his resignation, and, after the February 2009 elections, he was succeeded by Benjamin Netanyahu.

As Peres knew well, Netanyahu did not share his predecessor’s commitment to a two-state solution. For Peres, a recipient of the Nobel Peace Prize in 1994 for his role in negotiating the Oslo Accords, Israeli-Palestinian peace was a strategic necessity for Israel’s future security. He requested, and was granted, the green light to try his hand at breaking the deadlock in the peace process. Peres claims that he and Abbas had reached an agreement on nearly “all points of dispute.” (Peres told me Abbas agreed to postpone the contentious issue of Jerusalem for a year.) To finalize the deal, they agreed to meet on 28 July 2011 in Amman, but, according to Peres, Netanyahu thwarted the deal at the last minute. An historic opportunity for peacemaking was lost.

Peres was never able to realize the elusive goal of peace, but he utilized the presidency in other pro-active ways. He spearheaded an assortment of innovative projects, from peace education activities to raising funds for nanotechnology and neuroscience research and the Red Sea-Dead Sea “Peace Canal,” the planned pipeline aimed at saving the Dead Sea while providing electricity and desalinated water for Jordan, Israel, and the Palestinian Authority.

More importantly, Peres took it upon himself to serve as a check on government policies he deemed dangerous. Breaking protocol, he spoke out against Netanyahu-backed legislation that civil society actors had viewed as undemocratic, such as efforts to restrict foreign funding of left-wing NGOs critical of Israeli policies and a proposed ban on the Muslim call to prayer via loudspeakers at mosques across Israel. Peres said he was personally “ashamed” that the Knesset was considering these laws.

Peres’s most significant accomplishment as president was one he could not discuss publicly: foiling Netanyahu’s reported plans to attack Iran’s nuclear facilities. In an August 2012 interview, he stated that Israel “can’t do it alone” with respect to military action against Iran’s nuclear facilities, infuriating Netanyahu and then-defense minister Ehud Barak. Convinced that such an attack would have catastrophic consequences for Israel, he conducted an intensive behind-the-scenes lobbying campaign, meeting with senior security figures, government ministers, and key members of the Obama administration. He coordinated his efforts with IDF Chief of Staff Lt.-Gen. Gabi Ashkenazi and Mossad Chief Meir Dagan, who, along with Shin Bet head Yuval Diskin, shared Peres’s opposition to the government’s military plans.

Journalist Ben Caspit, in his new biography of Netanyahu, writes that Peres received countless calls from senior IDF officers and other members of the security establishment who thanked him for his role in blocking an Israeli attack on Iran, with some who went as far as to say, “You’ve saved Israel.”

I asked Peres how he could reconcile his blatant political interference with his inherently apolitical position as president. “When my house is on fire is that political?” he asked rhetorically. “I’m not a bureaucrat!” he exclaimed.

He might have added, however, that he was in fact a bureaucrat when he established Israel’s nuclear program. He just had not acted like one.

Guy Ziv is an assistant professor of international relations at American University’s School of International Service. He is the author of the book “Why Hawks Become Doves: Shimon Peres and Foreign Policy Change in Israel.”