Trump Is Right: Jerusalem Is Israel’s Capital — But It Is A Divided One. 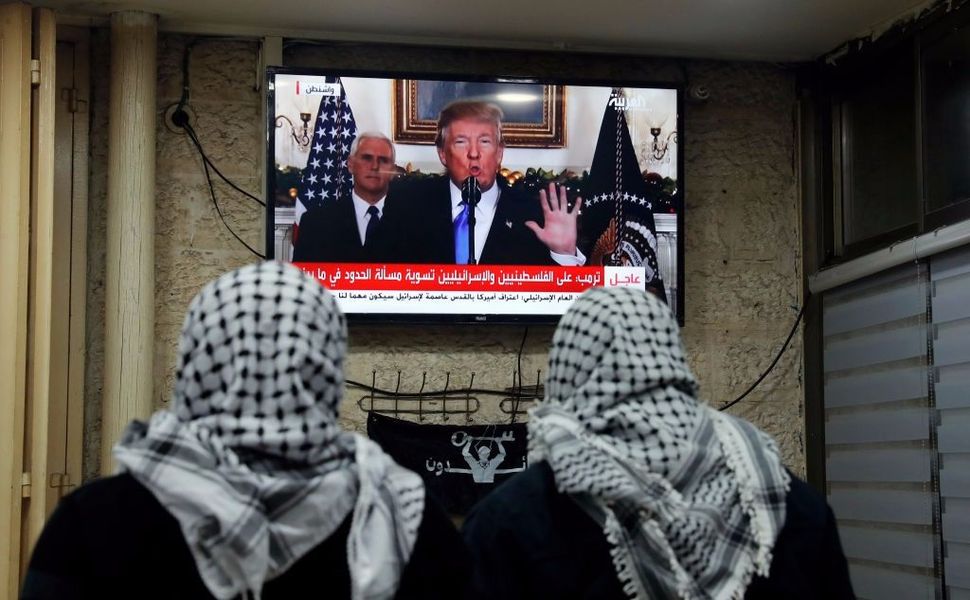 A picture taken on December 6, 2017 shows Palestinian men watching an address given by US President Donald Trump at a cafe in Jerusalem. US President Donald Trump recognized the disputed city of Jerusalem as Israel’s capital on December 6, 2017, a historic decision that overturns decades of US policy and risks triggering a fresh spasm of violence in the Middle East. Image by Getty Images 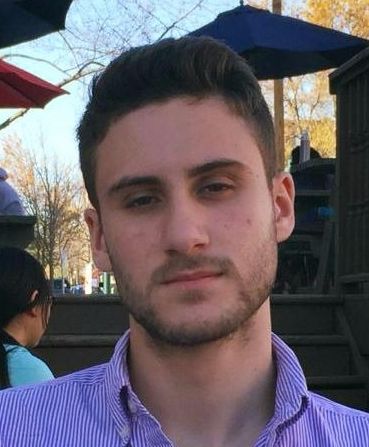 Jerusalem is the capital of the state of Israel. Israelis know this; Palestinians know it. Palestinian Prime Minister Mahmoud Abbas and the Arab world know it. And yet an illusion is maintained, for the sake of diplomatic correctness, that Jerusalem is not yet the capital of the Jewish state, though it is obvious that it is. It is generally acknowledged among the analytic class that to affirm what is obvious would bring great danger to a region which is already in great danger, or would put a stop to a peace process which is not yet in progress. Whatever the reason, the illusion is maintained.

This is not the only illusion—or delusion, depending on your level of commitment to reality— which shrouds the city of Jerusalem in a mirage. There is also a delusion which exists in the minds of some who support Israel that Jerusalem is not only the capital of Israel—which it surely is— but that it is the “undivided” capital, which it surely is not. Every year, on Yom Yerushalayim, the holiday marking the conquest of the Eastern part of the city by Israeli forces in 1967, marchers descend upon the streets of the capital city and celebrate the occasion. Some purposefully march through Arab neighborhoods in ritualistic fashion, as if to convince themselves. Surely, if they say the city is unified, it must be so. Thus the illusion is maintained. An Israeli teacher of mine once said that observers of the march mistake the participants’ assertiveness for pride, when it is more like a product of insecurity. After all, in which other unified capital city is it necessary to repeat to oneself, year after year, that it is unified—and under armed guard, no less?

President Trump has come under much criticism for his recognition of the obvious—that Jerusalem is the capital of Israel. If he had said it was the undivided capital, he would certainly deserve the opprobrium for subscribing to the same delusion to which others have fallen prey even while shattering another. But he made explicitly clear in his statement that his recognition of Jerusalem as the capital of Israel should not be received as the United States “taking a position [on] any final status issues—including the specific boundary of Israeli sovereignty in Jerusalem,” insinuating that there may in fact be a boundary which divides Jerusalem from the rest of the territories, and perhaps that boundary runs down the city. Most analysts of the region — in rising alarm and panic — have suggested that moving the embassy or recognizing the capital of Israel was a chip to play, an inducement—and Trump just gave it away for free. But they have it wrong. In the context of negotiations, US recognition of Israel’s capital, in any form, is meaningless—either Israel and the Palestinians sign a deal, in which case Jerusalem becomes Israel’s divided capital in a realistic final settlement, or they don’t, and the U.S. recognition changes nothing. No—the real leverage comes with recognition outside the context of negotiations. Think; President Trump has just become the first American president since the birth of the state of Israel to recognize Jerusalem as the capital of the Jewish state—a gesture that has become imbued with meaning not because the American president gets to decide where Israel’s capital is but because, as is characteristic of this conflict, many people have invested much in the illusion that he can. For better or worse, Trump’s predecessors’ refusals to do so has made Trump’s recognition meaningful. Can Netanyahu claim, now, that the first American president to recognize Israel’s capital is acting in bad faith? That no longer plays. It cannot.

As President Trump said in his statement, the record of peace is not good. President Obama, for all his hope, for all his support from journalists and common-sense analysts, left the Palestinians in the worst bargaining position they’ve ever had; not because of his policies regarding negotiations, but because of his general strategy in Middle East. After the Iran Deal and the Syrian civil war, the hardening of the Sunni states against Iranian hegemony has left the Palestinians with few allies and a hostile and restless region with bigger fish to fry; a region coming off a civil war which has created a refugee problem that deflection to Israel can’t solve. But it has also created a moment where is of the essence—where the pressure is rising; enough pressure, maybe, to do impossible, wondrous things. Palestinians have earned few victories, and the window of opportunity is quickly becoming a narrow aperture. Do I trust President Trump, with the Arab states, to give Palestinians a fair chance at a deal they can live with? Perhaps not—but if we have begun dispensing with our illusions, maybe we can move toward dispelling others; including the illusion that the status quo in the West Bank can continue indefinitely, a delusion which has captured the imaginations of too many.

I will admit that I do not have confidence in this administration to succeed where others have failed. But the truth is that others have failed. The moment is here, for better or worse, and it is such that there is reason—perhaps irresponsibly— to hope.

Aaron Bondar is a junior at Binghamton University, where he is studying political science and economics, and a staff columnist for the Binghamton Pipe Dream.

Trump Is Right: Jerusalem Is Israel’s Capital — But It Is A Divided One.