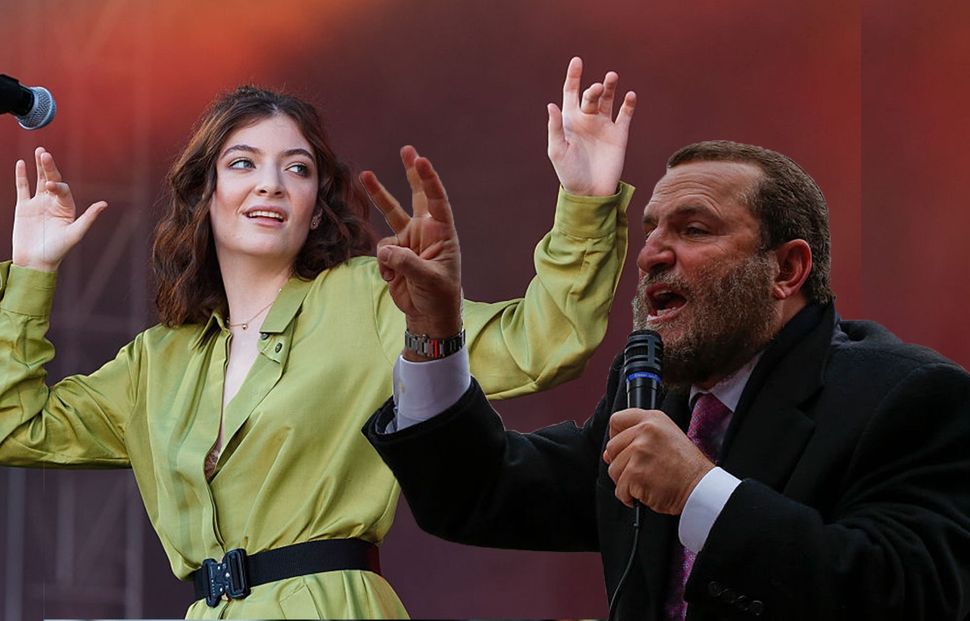 On the last day of 2017, Rabbi Shmuley Boteach took out a full-page ad in the Washington Post attacking Lorde, a massively popular 21-year-old pop singer from New Zealand, with the leading headlines “Lorde And New Zealand Ignore Syria To Attack Israel!” and “21 Is Young To Become A Bigot!” Boteach was seemingly incensed because Lorde had announced, a few days earlier, her choice to protest Israel’s policies towards Palestinians by canceling her show in Tel Aviv.

The attack on Lorde appears highly ironic to most everyone but Mr. Boteach himself. Boteach is an apologist for Steve Bannon, Breitbart and the Trump administration — and apparently an authority on who is and who is not a bigot. The ad is also a glowing exercise in self-defeat, landing in the public sphere like a lead zeppelin sure more than anything else to send droves of millennial Jews running.

The optics of the ad itself are offensive. The photo of Lorde chosen shows her slightly slouching, looking to the side with an attitude that might be confusion or guilt, and wearing an uncharacteristically low and revealing neckline. It is in marked contrast with the strong images of her most often seen in the press and seems chosen to highlight both her childishness and her sexuality.

The argument the ad makes is also riddled with problems. It begins by criticizing Lorde for joining the “global anti-Semitic boycott” while ignoring the human rights record of Russia, which is included in her current tour. This line of argument, which is commonly and mistakenly deployed against the boycott, divestment, and sanctions (BDS) movement, has a serious flaw. The first is that no one from Russia, or any other human rights abusing country, asked Lorde to cancel her concert there. What would have happened if Lorde had been planning to play in Chechnya, say, and the LGBTQ community asked her to cancel the concert in protest? We don’t know, but we certainly can’t assume that Lorde, who was known for her activism on progressive causes before this incident, would have gone ahead with the show.

The ad then goes on to criticize New Zealand, Lorde’s place of birth, for voting to condemn Israel for building “in Judea and Samaria” while ignoring Syria’s war crimes, as well as voting (with much of the world) to condemn the US’ recognition of Jerusalem as the capital of Israel, which Boteach calls “the proclamation of the 3,000 year old fact that Jerusalem is the ancient and eternal capital of the Jewish people.”

Judea and Samaria are, of course, the names given to areas which include the disputed territories which Palestinians have long hoped would be part of a future state and which are currently under military occupation by Israel, an occupation which the international community widely views as tainted by various forms of illegality. By calling the West Bank “Judea and Samaria,” their Jewish Biblical names, the Palestinian narrative is entirely elided from the picture. Not a great way for Boteach to show fairness or goodwill or an absence of bigotry.

Similarly, Trump’s declaration on Jerusalem was widely derided not because it recognized Jewish ties to Jerusalem, but because it did not recognize Palestinian ties. It recognized one people’s history while erasing another’s. Bigotry, anyone?

Also worth noting is the ad’s attack on New Zealand. How exactly is New Zealand’s record relevant to Lorde’s decision? Doesn’t dragging her nationality into it smack of something? Bigotry, perhaps?

The ad is riddled with “whataboutism.” This line of argument consists in responding to a criticism by saying, “Well what about what they did?” This line of defense has been exploited to the hilt by the American rightwing in the last few years, and Jewish organizations would be wise to realize that people, especially younger people, are getting sick of it.

Even if it can be shown that critics are focusing on Israel more than other countries out of bias or malice, it still does nothing to address the substance of criticisms levied against Israel. Advocates for Israel and Jewish interests would be well advised to abandon defending themselves by pointing at the things that villains around the world are doing which are so much worse. The truth is, it doesn’t look so good. The only thing that will win Jews upset with Israeli policies back, especially younger Jews, is showing that substantial efforts are being made to pursue peace and justice, not endless hasbara.

One should be careful about dragging out the “B” word. Once deployed, it is hard to take back, and once it is used to make enemies, it’s hard to again make friends. I think we can trust that Boteach’s ad won’t be inspiring Lorde to reconsider her decision anytime soon.

Lorde herself appears to have decided to cancel the show after careful consideration, first announcing she was taking some time to consider those what those who reached out to her had to say, and then a few days later canceling.

“I have had a lot of discussions with people holding many views, and I think the right decision at this time is to cancel the show,” Lorde wrote at the time. “I’m not too proud to admit I didn’t make the right call on this one.”

Among those who had contacted her were fellow New Zealanders Nadia Abu-Shanab and Justine Sachs who wrote an open letter to the singer online asking her to cancel the concert.

“Dear Lorde … we’re two young women based in Aotearoa, one Jewish, one Palestinian,” the women wrote. “Today, millions of people stand opposed to the Israeli government’s policies of oppression, ethnic cleansing, human rights violations, occupation and apartheid. As part of this struggle, we believe that an economic, intellectual and artistic boycott is an effective way of speaking out against these crimes. This worked very effectively against apartheid in South Africa, and we hope it can work again.”

It is abundantly clear that Lorde was motivated by a concern for the human rights of the Palestinians. One can debate with her whether BDS is the right methodology for attaining those rights, but first, we have to meet her and everyone like her on the right ground of discussion — that of mutual concern for the plight of the Palestinians and the failures of the Israeli state. In misreading the motivations of Lorde and other activists as bigotry and attacking them as villains, we only ensure that we will make more enemies and build more walls.