What Jewish Community Leaders Must Do After #MeToo 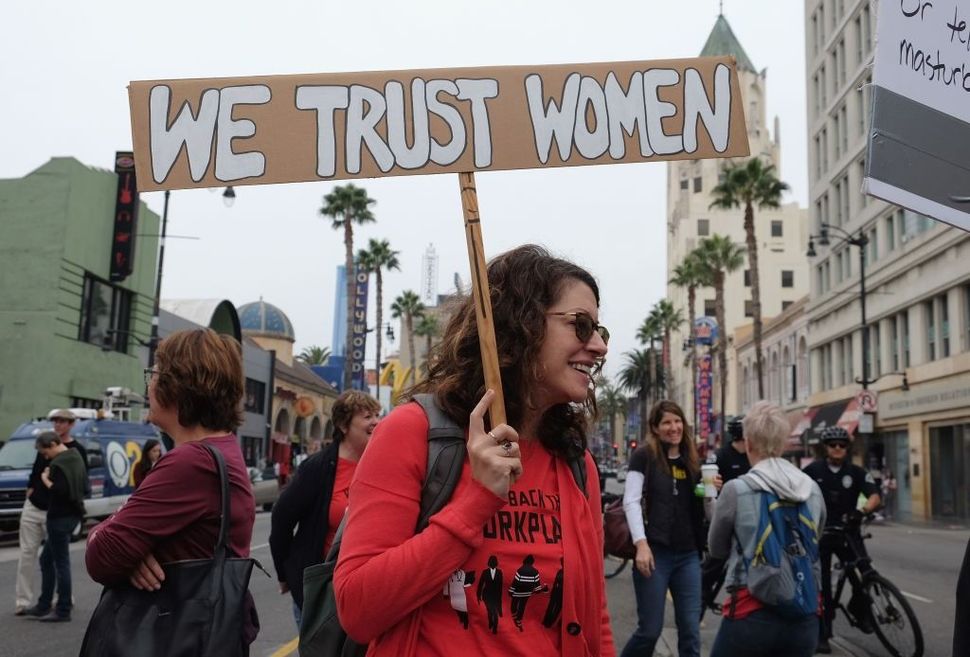 The encouraging flurry of activity in the Jewish community following #metoo has included organizations creating or revamping policies and hosting events and training to prevent sexual victimization, including harassment. But a systemic problem requires a systemic approach to change. Below are the gaps I have noticed based on my criminological and sociological research on sexual violence and my Jewish professional work.

1) Listening Is Not Enough

Sexual harassment and victimization are not new problems, not in the world and not in the Jewish community. While we have made strides in protecting children, adult victims in the Jewish community have expressed that they have been left out in the cold. That because they were not victimized as children, there was nowhere to put their experiences and no one to turn to in the community that would care. As Jewish professional leaders wonder what employees and stakeholders need to hear from them, I’d ask them to, instead, consider what it is they need to hear from others.

Leaders should also be aware that, without fail, disclosures will be made after every event raising awareness about victimization. Being part of these events does not make you ready to listen and respond to these disclosures. Just like it is a time for a particular kind of silence, the silence of the powerful, it is also a time for a particular kind of listening. The listening that is needed must center the voices of victims, be trauma informed, and appreciate the nature, incidence, and dynamics of sexual victimization in the Jewish community. Experts in the field of gender based violence can help you do that.

2) The Relationship Between Sexism And Sexual Victimization Is Fundamental

Sexual violence is a gendered crime and, while men have also been victimized, women make up the majority of victims. Therefore, the unsurprising fact that the majority of top Jewish professional earners are men should lead beyond the call to hire more women. Because now that we know how women were driven from media careers and industries following sexual harassment, or their attempts to rebuff it or speak up, it isn’t hard to imagine that sexual victimization, and not just sexism, prevents women from rising to the top of Jewish organizations. One only has to follow the conversation around #ShulToo on Twitter to see the links between sexism and victimization in Jewish settings. It is time to consider the possibility that our organizations may not be the safest places for women to work rather than rushing to conclusions, such as familial obligations, when they leave or are not promoted.

Furthermore, research shows that in religious communities especially, gender plays a key role in victimization, disclosures, and their aftermath. As we begin to tackle victimization in our midst, understand that religious structures, such as an emphasis on female virginity or the favoring of heterosexual relationships, leads to the gendered and sexist stigmatization of female, male, and LGBTQ+ victims when they come forward.

3) Silence And Disclosures Are Rooted In How The Community Operates

As victims who have been silent for years come forward and female rabbis tell their stories, there remains an understandable element of fear. We don’t want to name names and when we do, the Jewish whisper network is clouded in secrecy. The research on sexual victimization and the lived experiences of victims in religious communities explains why. While sexual victimization in general is underreported, in religious groups it is reported even less. Often, the silence of victims comes from the power of the community as victims consider the risks to coming forward, not only to themselves but even to their perpetrators. In general, religious groups are seen as more important than their individuals, complicating a victim’s desire to speak out and be heard. Disclosing flies in the face of loyalty and conformity to group norms and threatens the group’s solidarity and reputation. Disclosures are, therefore, often willfully ignored. The silence of religious communities, which Nancy Nason-Clark calls a “holy hush”, is anything but holy.

Additionally, people in religious communities do not want to believe that one of their own would abuse. Since we live among each other and know each other well, the cognitive dissonance in these cases is at an extreme. That’s why many religious groups do not bring, or have a very hard time bringing, victimization to the authorities. I have found this to be true across the Jewish denominational spectrum. Part of it is because the Jewish community sometimes avoids classifying sexual victimization, including harassment, as a crime which precludes our understanding of the dynamics of victimization and the appropriate response to its disclosure or discovery. Rather than be aware of and abide by legal obligations including reporting, religious groups often turn inward upon discovering victimization, such as investigating themselves. Ensuring that sex crimes remain hidden may suit institutional interests, but dismisses those of victims and the law and endangers the entire community. This approach has also led some victims to feel more betrayed by their religious communities than by their perpetrators. A loss of faith can come with this loss of not only a sense of community, but the very community itself.

Jewish leaders bear a much bigger responsibility than their organization’s reputation when contending with allegations of victimization. Their goodwill to do better is applauded — but not enough. Rather than wait to be sued and shamed by victims who come forward in the face of inaction, let us be compelled by their stories to take a hard look at our approach to victimization prevention and intervention. Let’s acknowledge and change the environments in our organizations that have allowed victimization to occur and persist. Let us recognize how current processes for oversight, careful watching, have in fact led to oversight of a different kind – the failure to notice victimization.

For a victim to sacrifice their safety, be it emotional or otherwise, by speaking out they need to believe that we are ready to create a real cultural shift. That there will be a response that matters. That they have been invited to the table where the conversations around how we can do better are taking place. Those of us who have bravely said #Metoo, or Hineini as Rhonda Abrams put it, ask the community and its leaders: Ayekah — How will you address these gaps so that we know we have been heard?

What Jewish Community Leaders Must Do After #MeToo