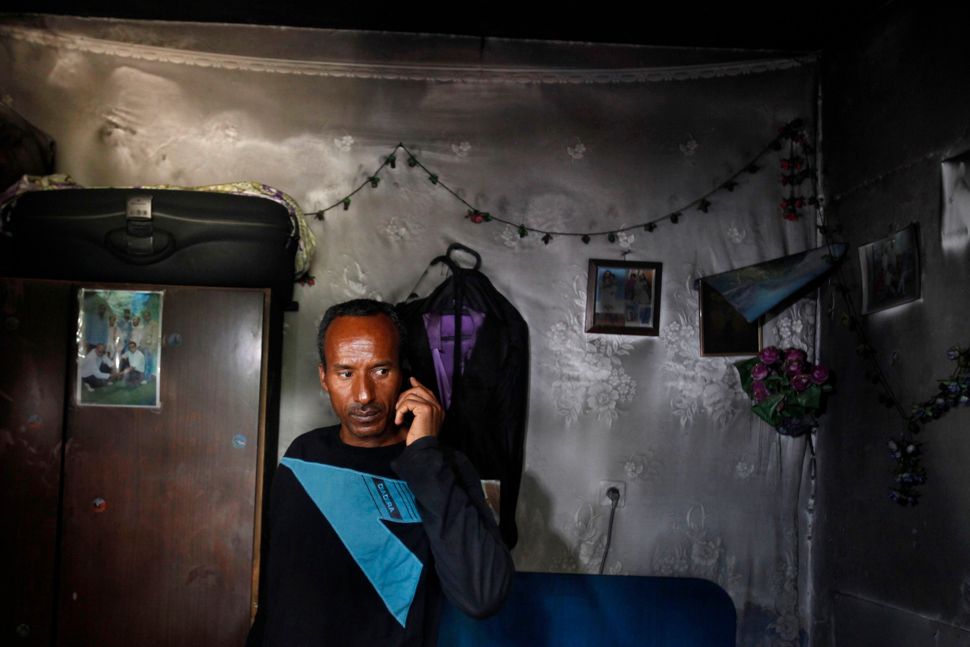 An African immigrant from Eritrea speaks with his mobile phone as he looks at the damage caused to his friend’s apartment in central Jerusalem on July 12, 2012 after unknown attackers tried to burn it down overnight. Image by Getty Images 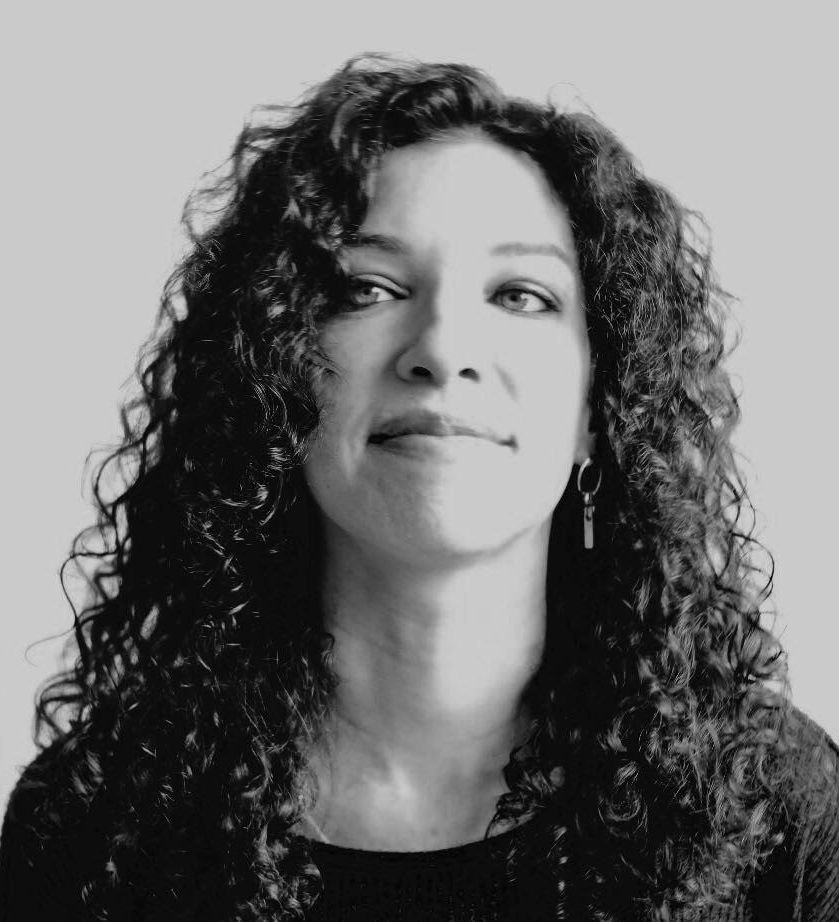 A version of this article originally appeared on 972mag.com.

As a social worker in south Tel Aviv working with African asylum seekers from Eritrea and Sudan, I have seen my fair share of racism and opposition from Israeli politicians and residents in these neighborhoods. Let’s be clear on one thing, south Tel Aviv is not a utopian oasis. It has always been a rough and tough area, neglected by the Tel Aviv municipality. Walking through these neighborhoods, you see piles of trash everywhere, junkies with homemade crack pipes, homeless people living in the parks, and a stench of urine follows you. The only difference between now and 10 years ago is that you now see African people on the streets and African kids playing in the parks because they live in these neighborhoods.

I moved to Israel three years ago to do trauma work with African asylum seekers and torture victims who were kidnapped and trafficked in the Sinai. Eritrean and Sudanese refugees fled brutal and dangerous dictatorships, forced conscription, civil wars, and threats for being human rights activists. Those who were kidnapped, trafficked, and brutalized in Sinai torture camps run by Bedouin tribes were only released when their already impoverished families paid a $40,000 ransom fee. The lucky ones who made it across the Israeli-Egyptian border were severely traumatized, suffering from post-traumatic stress disorder (PTSD).

Upon arrival in Israel, I was warned that the mainstream sentiment towards this community was blind racism. When I was looking for my first apartment in Tel Aviv, a landlord asked me where I worked. I told him that I am a social worker working in south Tel Aviv with Eritreans and Sudanese. He rolled his eyes and said, “Just don’t bring any of those dirty Sudanese into the building, OK?” On several occasions, when walking in the Hatikva neighborhood with my clients, older residents would shout at me saying, “What are you doing with those infiltrators? You probably sleep with these jungle people.”

This anti-refugee sentiment trickles from the top down. Israel’s Prime Minister, Benjamin Netanyahu and other officials regularly refer to the African asylum seekers as “infiltrators” whose presence threatens Zionism and the Jewish state.

During 2014 there were several politician-lead anti-refugee demonstrations in which the demonstrators physically attacked refugees. I worked with one Eritrean family whose infant was stabbed in the head by an Israeli man who claimed that God told him to stab a black baby. He was later deemed mentally ill and unfit to be tried. The hell that this family went through is truly unimaginable. They petitioned for refugee status in Israel on the basis of a hate crime. Despite countless requests, the infant alone received refugee status, not her parents. As a result, Israel’s National Insurance Institute refused to finance her medical treatment because her parents lacked legal status. After years of expensive medical treatments and resettlement requests, they now live in Europe with legal refugee status and full access to basic human services.

The anti-refugee movement, instigated by politicians but comprised of working class residents born and raised in South Tel Aviv, has a clear message. They blame the refugees for the problems in their neighborhoods, and they want them deported. The movement’s leader, Sheffi Paz, a middle-aged Ashkenazi lesbian and former supporter of the left-wing Meretz party, lives in the Shapira neighborhood of south Tel Aviv. She clearly spews hatred and wants to expel the refugees, who she – like Benjamin Netanyahu — calls “cancerous infiltrators.” She rails against the presence of African children in Israeli schools. Determined to make their lives miserable, a neighborhood resident told me that she pours water on slides at parks where these children play.

After hearing about this bully for the past three years, I finally saw Sheffi Paz in action during Hanukah. She organized a Hanukah parade and candle lighting in Neve Sha’anan, a neighborhood with many African refugees. Almost as many policemen as residents attended the event. To onlookers, her small parade with music and glow sticks looked like a street party. People pulled out their phones to snap pictures, and kids tugged their parents, wanting to join the parade. Little did they know, however, that the parade organizers saw theses black-skinned kids as a threat to their holier-than-though Jewish event.

The parade snaked through the streets to a nearby park where the organizers had set up chairs and a performance for Israeli Jewish children and families. By 6:30 pm the majority of people in the park were African refugee kids and their parents. A few children wanted to sit and watch the performance next to the Jewish kids. I heard Sheffi howl at the police, “Do you see how they are ruining our event! Next year we need to ensure that it will only be Jews!” Later that night, Sheffi and her goons showed up at a candle lighting ceremony hosted by a feminist organization and leaders of the refugee community. Their verbal harassment and violent behavior towards the attendees continued for the duration of the event.

Recently, I attended a screening of a film about an Eritrean victim of human trafficking. This evening was one of a series of events organized by a student group opposed to the recent Knesset bill, approved by Israel’s High Court, authorizing the deportation of 40,000 asylum seekers to Rwanda. Sheffi Paz and her gang disrupted the event as soon as the organizer stood up to begin the screening. Spread throughout the audience, they began whistling and screaming so no one could hear the speaker. Sheffi stood in front of the screen shouting that the film will not be screened. Her thugs stated that they opposed the presence of African refugees, a film screening with information about these refugees, and the predominantly left-wing audience in their beloved Shapira neighborhood. A bigot in his mid-twenties yelled, “Why don’t I even see any “infiltrators” here at this event?” A pro-refugee activist responded, “I think they are familiar enough with these painful stories about torture and human trafficking.” A large brawl continued for about an hour until the police eventually arrived to shut the event down.

Some complaints of the older Israeli residents of South Tel Aviv are valid. Their neighborhoods are poor and neglected; there is petty crime, poor infrastructure, as well as a wave of gentrification and rent increases over the past five years. Instead of taking their legitimate complaints to the local City Hall or lobbying against the Israeli housing crisis, they have turned African asylum seekers into scapegoats for all things wrong in their lives. Rather than regarding them as people with a traumatic history who could become their allies, they consider them to be opportunists who came to Israel willingly to make money and leave. Talk to any African asylum seeker and you will hear that this is not the case. They fled genocide, hunger, forced conscription, and death threats. Most are in Israel by mistake, as they were trying to get to Europe or the Americas.

African asylum seekers living in Israel are without legal status and access to basic human rights. That means they do not have healthcare, employment, freedom of movement, higher education, and other basic services that Israeli citizens and legal residents enjoy. Most work under the table in low paying and often life-threatening jobs, primarily in cleaning or construction. Since these “illegal” asylum seekers are not granted refugee status, they are not eligible for passports. They are trapped in a horrible Catch 22, and no one would voluntarily choose to live like this. On a daily basis, families beg me to help them get out of Israel and be resettled in Europe or North America. As an American and Israeli, the worst part of my day is that I have to tell them, “There is really nothing in my power I can do to help you.”

The already harsh economic conditions of these refugees worsened significantly in May 2017. The Knesset passed a law allowing the government to withhold 20% of asylum seekers’ monthly paychecks that they are supposed to receive when they leave Israel. I have since heard reports that people who recently left Israel after years on a United Nations resettlement waitlist did not receive their 20% return.

Israel has recently reached a major financial agreement with Rwanda and Uganda to forcibly relocate 40,000 asylum seekers against their will. Rwanda has not yet recovered from the civil war and genocide of 1990-1994, and currently hosts more refugees from other African nations than they can handle. Concurrently, Uganda is overflowing with refugees, has one of the highest rates of alcohol consumption in the world, and cannot meet the most basic needs of its own citizens, as well as refugees.

The families I work with are scared. I cannot say anything to mitigate their fear because I, too, am scared for them. I fear for them being deported, as well as being harassed and assaulted by the Israeli government, Sheffi Paz, and her supporters on a day-to-day basis. Both situations are horrible and deporting African asylum seekers will not solve the problems of South Tel Aviv’s working-class Israelis. They will just have to find a new group to scapegoat.

However, the hardest thing for me to stomach about this mass deportation of African asylum seekers is that the Israeli government is doing to them what was done to the Jews in the Holocaust: rounding them up and shipping them off to the deaths. As someone whose family once fled pogroms and financial hardship in Russia, as well as genocide in Lithuania, I am truly shocked at how this can be happening now. If the blockade on Gaza and occupation of the West Bank failed to motivate world powers to intervene, it is clear to me that the Israeli government has the license to do whatever it wants to African asylum seekers while the world turns a blind eye.