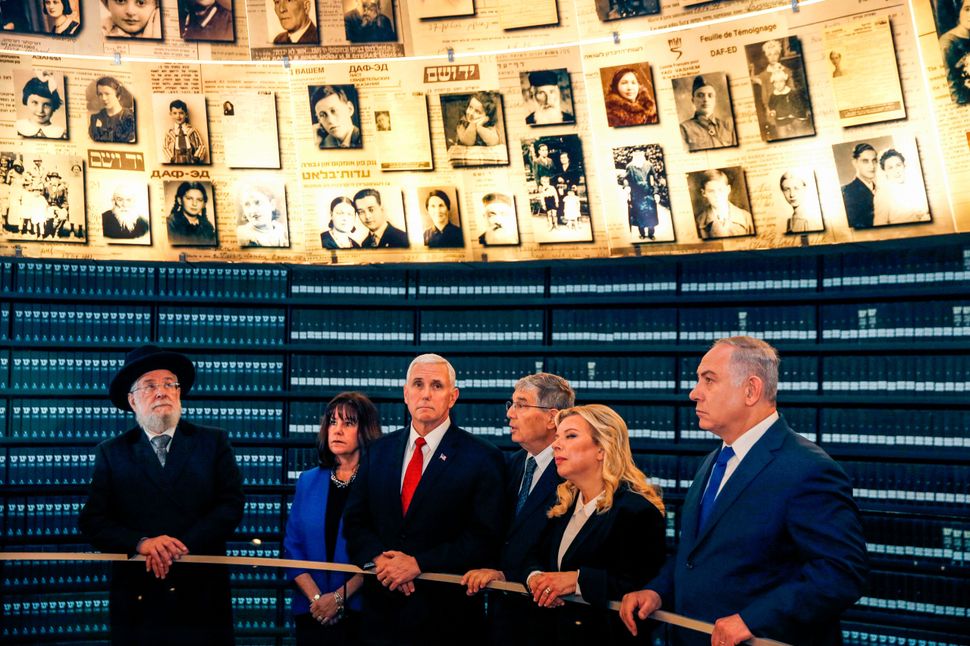 Back in college, a rabbi of mine shared a story from a talk on the story of Joseph he gave to unaffiliated Jewish retirees. After the rabbi spoke at length about the biblical narrative and his brothers’ trials and tribulations in Egypt, an older woman raised her hand.

“So, when did Joseph end up meeting Mary?,” she innocently asked.

Everyone laughed. A few people gasped. I still wonder to this day if the story is true. How could someone Jewish be so completely unacquainted with biblical stories that they sooner recognize a name in a Christian context than in a Jewish one?

Pence recently visited Israel, and his visit happened to coincide with International Holocaust Memorial Day. As is customary for visiting dignitaries, he took the opportunity to visit Yad Vashem, Israel’s Holocaust memorial museum. While he was there, a quote and video tweet were posted on his official Twitter account that to the untrained eye seemed rather Christian:

A few days ago, Karen & I paid our respects at Yad Vashem to honor the 6 million Jewish martyrs of the Holocaust who 3 years after walking beneath the shadow of death, rose up from the ashes to resurrect themselves to reclaim a Jewish future. #HolocaustRemembranceDay #NeverAgain pic.twitter.com/67UuC1cYI2

This tweet upset some members of the tribe. Haaretz declared that “Mike Pence’s Holocaust Day Message With ‘Christ Imagery’ Sparks Jewish Outrage.” Facebook groups and pages catering to mainly progressive Jewish members, such as the Facebook page for ReformJudaism.org, filled with angry comments.

To be sure, bringing up Christian ideas in reference to Jewish tragedies does not often go over well with the Jewish community. It reminds many Jews of the centuries of forced conversion and relentless missionary zeal. It also echoes of replacement theology, the idea that Christians, not Jews, are the current “Chosen People” and will inherit Israel after the return of Christ.

However, there are a couple issues with the interpretation of Pence’s tweet.

Firstly, the tweet is a misquote -– more a mis-paraphrasing -– of Pence’s speech at the Knesset. Stating his intent to visit Yad Vashem, Pence says he intends “to honor the six million martyrs of the Holocaust. We will marvel at the faith and resilience of your people, who just three years after walking beneath the shadow of death, rose up from the ashes to resurrect yourselves to reclaim a Jewish future and rebuild the Jewish state.”

Take a listen for yourself:

But more importantly, Mike Pence seems to be alluding to a biblical story from Jewish tradition, one mentioned at Yad Vashem on Israeli Holocaust Memorial day every year: the prophecy of the Valley of Dry Bones found in Ezekiel 37:1-15.

The prophecy is a vision of Ezekiel the Prophet which sets him in a valley covered in skeletons. At God’s command, Ezekiel orders the bones to rise. Muscle, tendons, and skin spontaneously form in a ghastly fashion. God tells Ezekiel “these bones are the House of Israel,” a people whose “hope is lost,” but whom God promises to raise and “bring back to the Land of Israel.”

The prophecy has been referenced by leaders of all streams of Judaism when talking about the Jewish People’s recovery from the Holocaust. Take the words of Dr. Tova Ganzel as they appear on the official site of Yeshivat Har Etzion in her “The Vision of the Dry Bones”:

“Whether the description is of an actual occurrence or an allegory, it is clear that in the Jewish national consciousness, this prophecy remains timeless…For our generation, seeing the establishment and prospering of the State of Israel after the horror of the Holocaust, this consciousness of the redemption being bound together with the vision of dry bones is greatly amplified.”

And just a few years ago, Rabbi Dalia Marx wrote on Reformjudaism.org that the prophecy is recited annually at Yad Vashem because it “reminds us that sometimes heroism is g’vurat haruach, heroism of the spirit.”

I did not vote for Donald Trump and I do not support all of Mike Pence’s positions by any means. But a sensational reaction to Pence’s tweets is unjustified. Mike Pence’s words are beautifully alluding to an oft-quoted passage, central at the core of modern Judaism’s own story of death and rebirth. Mike Pence’s words, whether you like it or not, were rather Jewish — and it’s a shame that so many Jews couldn’t recognize them.

Gedalyah Reback is a journalist who resides in Modi’in, Israel with his wife and two children. He covers technology, startups, space, the Middle East and Judaism (especially conversion).