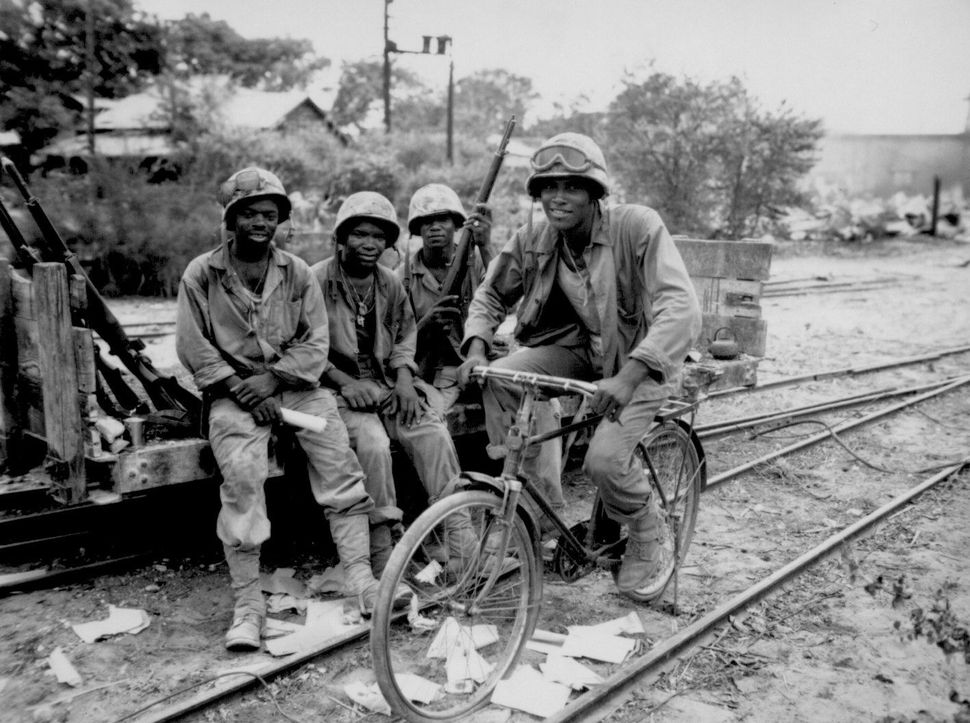 The superhero film ‘Black Panther’ pulled in a record-breaking $192 million on its debut weekend. It was also the highest grossing opening weekend of any February, and one of the top 15 global debuts in history.

Clearly, Disney’s mythical King of the African nation Wakanda has charmed the public — The Black Panthers will surely once again serve as a major point of pride for people of African descent all over the world.

The original Black Panther story is even more heroic than its fictional counterpart.

The original Black Panthers were the 761st Tank Battalion, the first all-Black armored battalion of World War II. Their logo depicting a black panther, as well as their nickname, was later adopted by the radical 1960s group.

The unit’s 36 officers included baseball star Jackie Robinson, although he did not see action in Europe because he was embroiled in a court battle stemming from his refusal to give up his seat on a military bus. Charges against his Rosa Parks-esque action were eventually dropped.

The unit’s 676 enlisted men, who endured racist taunting in the U.S. as well as from some fellow GIs and officers in Europe, only got to go overseas because of the pleading of Eleanor Roosevelt. Once there, and in spite of this shameful start, they battled superheroically — in the truest sense of the term.

The Black Panthers fought major battles in six European countries, and were part of four major Allied campaigns, despite nightmarish weather, impossibly challenging terrain for tanks, a consistently massive enemy presence, the loss of 71 tanks, and the general horrors of war.

Beginning on November 7, 1944, the Battalion served for over 183 consecutive days at the head of Patton’s Third Army. Most units served for one or two weeks only at the front line, but there they fought, suffering a 50 percent casualty rate, in the Battle of the Bulge in Tillet, France, the Battle of the Rhine, and many other major conflicts.

The unit bored a hole in the Siegfried Line, through which Patton’s 4th Armored Division advanced into Germany. The 761st fought in France, Belgium, and Germany, and at the River Steyr in Austria, they were one of the first American forces to join with the Soviet Army of Ukranians in Austria.

In May, 1945, they participated in the liberation of Gunskirchen, a subcamp of the Mauthausen concentration camp.

Sonia Weitz, who was liberated from Mauthausen, wrote about The Black Panthers’ role in her poem The Black Messiah.

The Black Panthers captured, decimated or helped to liberate over 30 towns, as well as four airfields and three ammunition supply sites, and took out 461 wheeled vehicles, 34 tanks, 113 large guns, and thousands of weapons.

The State of Israel officially recognized the Battalion, as did President Jimmy Carter, who issued a Presidential Unit Citation for Extraordinary Heroism to the 761st.

As for Patton, he told them that he did not care what color they were, as long as they “went out and killed the kraut sons of b******.”

“Everyone has their eyes on you and is expecting great things from you,” he told them. “Most of all, your race is looking forward to your success. Don’t let them down, and, damn you, don’t let me down!” They most certainly did not.

Learn more about the original Black Panthers at www.761st.com