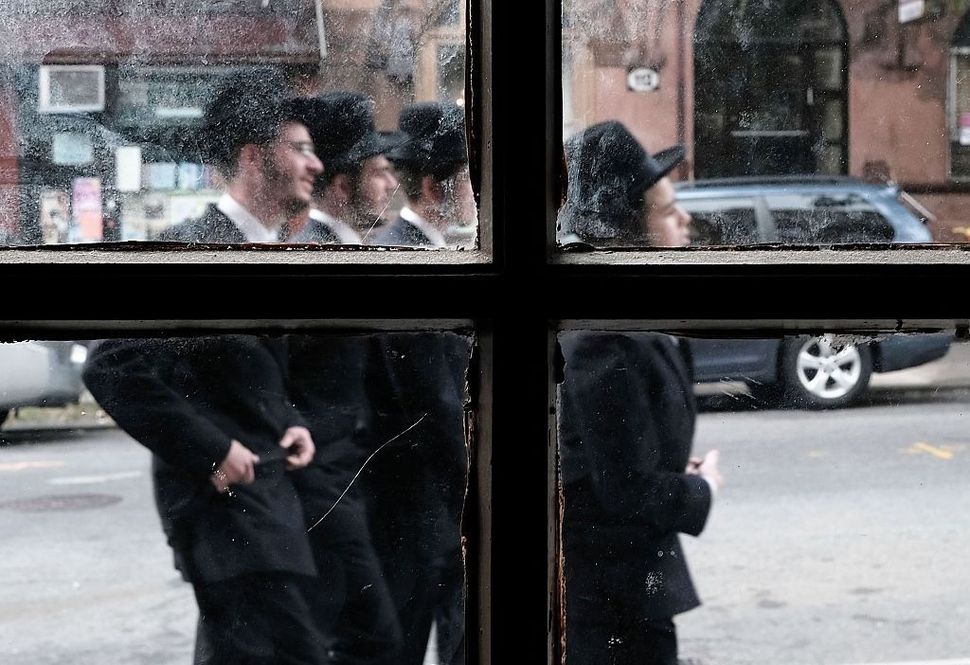 Members of an Orthodox Jewish community in Williamsburg, Brooklyn walk through the neighborhood. Image by Getty Images

In an op-ed for The Forward, Freida Vizel offers a shocking argument in defense of the actress Amber Tamblyn’s recent Tweets about Hasidic men in Williamsburg, Brooklyn:

“When men are led to believe that the road is theirs first, that it is a place only for their big minivans, then the criticism is fair of the group as a whole, not merely its individuals.” It seems odd that the educated and socially conscious Vizel needs to be reminded about the destructive power of stereotypes, but it bears repeating if only to understand the strong backlash against Ms. Tamblyn’s Tweets:

If anyone in Brooklyn near the intersection of Washington Ave and Atlantic Ave just saw a Hasidic man in a grey van try to hit a woman and her baby in a stroller as she crossed a crosswalk, honking and touching the stroller with the car’s bumper, please DM me. That woman was me.

Thank you everyone for your kind words of support today. We are fine. But this is not the first time a man from the Hasidic community in NYC has attempted to harm me or other women I know. Any woman riding a bike through South Williamsburg can attest. I hope this guy is caught.

Of course, a plethora of scientific and scholarly research is available on the lasting dangers of stereotyping, but, alas, one need look no further than Vizel’s own words to understand the inaccuracies of stereotypical portrayals of Hasidic Jews:

“It begins,” Vizel writes about a seemingly contradictory portrayal of Hasidim in the media, “with an understanding of just how diverse Hasidic Jews are — far beyond the media’s homogenous portrayal of them.” She continues: “Hasidim are far from a monolithic group. Let’s be clear when we talk of Hasidim, explaining degrees of insularity before painting groups with broad brushstrokes.”

Indeed, these words are wise ones. I myself was born and raised the son of a rabbi and an ardent Hasid, not on the insular streets of Williamsburg but in Las Vegas. Despite my obvious visible appearance as a Hasid, Tamblyn’s words reflect nothing about me, nothing about the culture in which I was raised and nothing about the ethics I cherish. She literally painted me, and tens of thousands like me, with broad brushstrokes.

The truth is, it’s highly unlikely that Tamblyn or many of her Twitter followers recognize the nuanced differences between Hasidim and other Orthodox Jews, let alone the inter-Hasidic groups. And yet, the next time they see a man with a yarmulke and beard driving down the road, the image they will conjure up is the entitled one painted in Tamblyn’s Tweets. If this alone isn’t enough to justify the backlash, consider subsequent replies to Tamblyn’s tweets. In an almost comical irony, the thread spiraled into a cliched display of prejudice befitting the comments section of Breitbart but certainly not the words of a powerful social justice advocate.

In one particularly scary Tweet “liked” by Ms. Tamblyn, a Twitter user Benjamin O-Keefe evoked the Crown Heights riots as proof of Hasidim’s disrepute amongst Brooklynites:

It’s not anti-semitism at all. Have you ever heard of the Crown Heights riots? The folks in my neighborhood do not feel bound by our laws, they have their own “police” force, they cover up rapes. This isn’t about Judism it’s about an extremist cult-like sub group.

For those that need a reminder, the Crown Heights riots erupted after a car being driven by a Chabad Hasid accidently struck and killed an African American boy named Gavin Cato. In the ensuing days, mass assaults broke out against Crown Heights’ Hasidic population, including chants of “Heil Hitler” and “Death to Jews,” culminating in the murder of Yankel Rosenbaum.

To make matters worse,Tamblyn piled on, using the classic tactic of pointing out her personal connection to Jews (her husband, the comedian David Cross):

Lol I’m married to a Jew. Go ahead and twist my words all you want. Your misogyny and sexism reeks from here. (Except for you, Benjamin. You are awesome.)

By no means do I think Tamblyn hates anyone. She simply doesn’t relate to any aspect of Hasidic lifestyle and therefore isn’t inclined to care much for Hasidic people. In the words of the author Ta-Nehisi Coates, “Racism is not merely a simplistic hatred. It is, more often, broad sympathy toward some and broader skepticism toward others.”

Like all groups of people, Hasidim deserve to not be judged with broad skepticism simply because our lifestyle, dress, and culture are different. We should be heard when we call out stereotypes against our eclectic community, not blamed as the cause because of the actions of some.

I hope Tamblyn and Vizel can have the empathy to recognize the offense of being lumped into a stereotype that does not reflect our actions or beliefs.

Yehudah Rodman is a Communications professional in Boca Raton, Florida. He holds a Multimedia Journalism degree from Florida Atlantic University. Follow him on Twitter @rebleib15 ‏