These Children Didn’t Survive The Holocaust, But Their Art Still Gives Me Hope 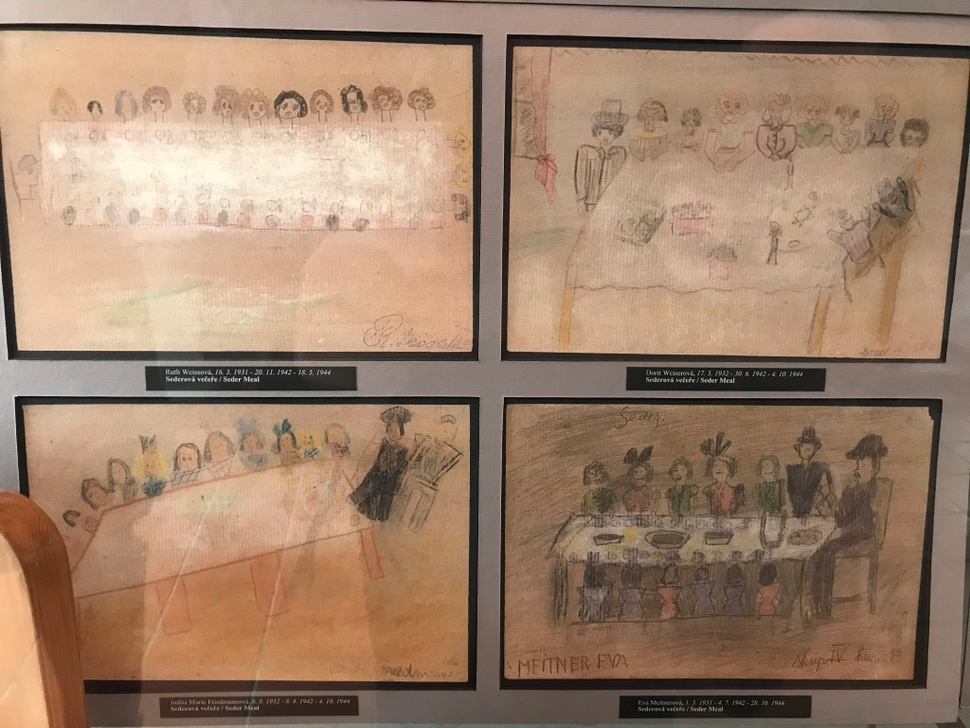 Children’s drawings of seders from the exhibit in Pinkas. Image by Abby White 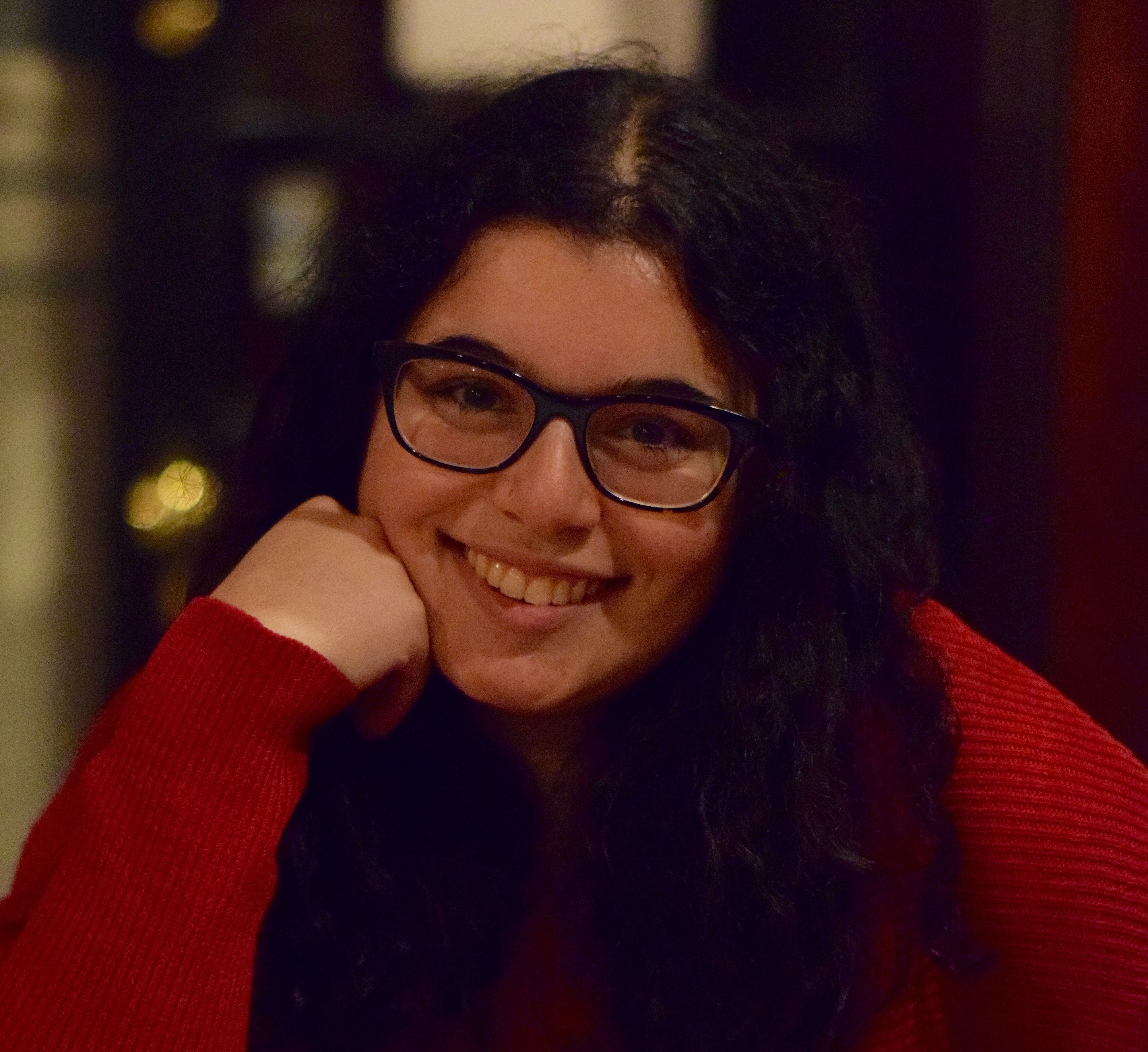 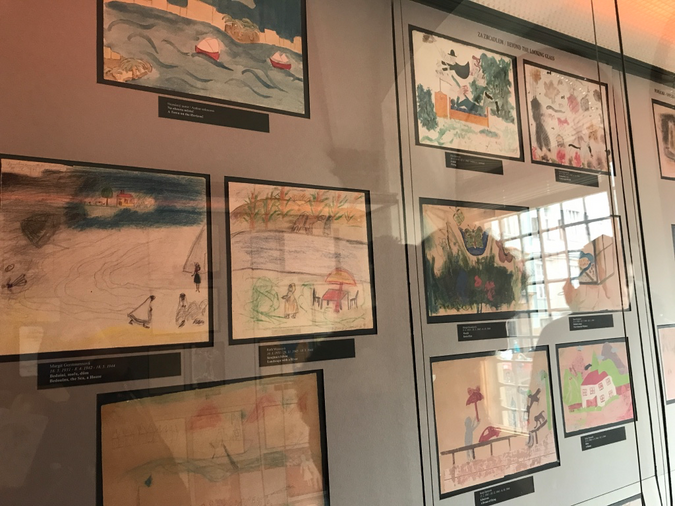 Part of the exhibit of children’s drawings in Pinkas, including the drawing by Margit. Image by Abby White

At first glance, the drawings made me smile. Small, confident hands had etched them, in haphazard strokes; colors crossed the rainbow spectrum, and people looked less like humans than like blobs. They reminded me of my childhood, of my cousins, of the kids I babysit.

But then I stepped closer to the glass cases and saw the slips of black paper underneath each drawing inside.

I stood in Pinkas Synagogue in Prague, which the city’s remaining Jewish population transformed into a Holocaust memorial in the 1950s. I had just spent minutes taking photos of the building’s walls, covered with the tiny names and lifespans of the Czech Republic’s 80,000 Jews who died in the Shoah. I had been awed and cowed by the space those names took up, leaving no stretch of wall plain, covering the white paint with black and red.

Somehow, though, when I walked into that room of children’s drawings, I didn’t immediately comprehend that they had died in the Holocaust, too. Life seeped through the artwork as real as my own; I couldn’t imagine — didn’t want to imagine — that life had been chopped short.

But it had. The drawings came from a program in Terezin organized by one woman, Friedl Dicker-Brandeis, to give children in the camp as normal a life as possible. She and her fellow adults in Terezin used any scraps of paper and pencil they could find to help kids remember their pasts and process their present through art. As a result, the Jewish kids in Terezin made thousands of drawings — about the camp, their families, evil, their dreams. 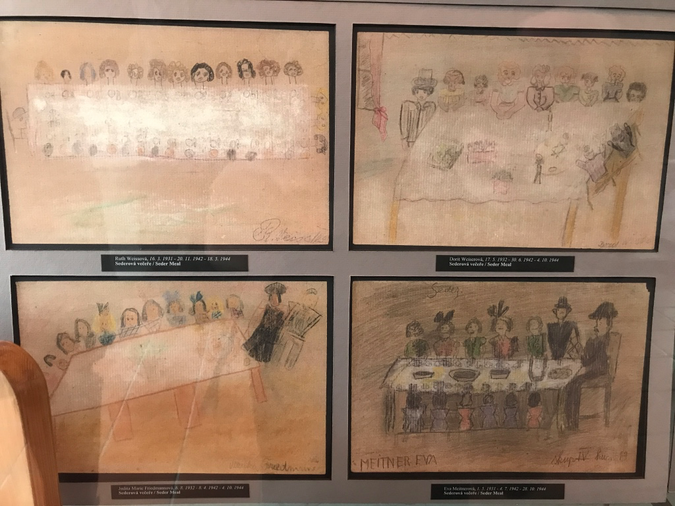 Children’s drawings of seders from the exhibit in Pinkas. Image by Abby White

And holidays. I saw these drawings March 29, the day before Passover, which I would celebrate with my family and friends. These children had celebrated Passover with loved ones as well, before Terezin, and drew the Seders they remembered. Seders just like mine, just like my ancestors’, just like the Seders we as Jews have had for thousands of years. But with one crucial difference: not one of these children lived past the age of fourteen. 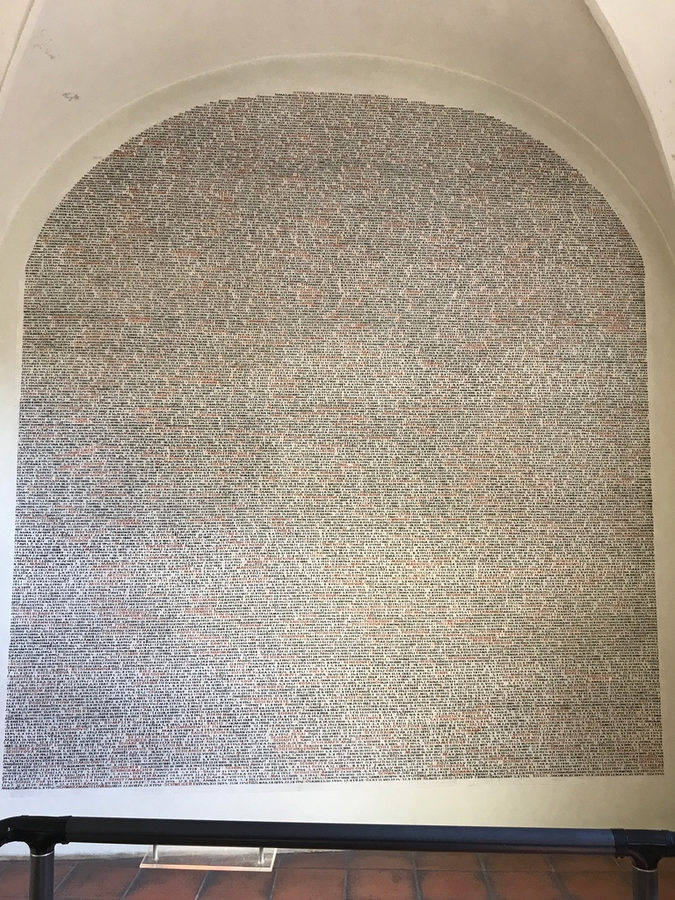 I spent 20 minutes in this room, interrupted by quick walks to the hallway to take deep breaths and dry my eyes. Days later, my chest still aches when I think of the tiny hands that drew those dragons, those grandparents, dinner tables, home. But so, too, do I feel a renewed thankfulness for and pride in my family’s Jewish traditions. I am grateful to be Jewish, to come from a Jewish family, to be from the same people as those bright, brilliant children. I left Pinkas Synagogue feeling close to bursting with love for my people, mingled with immovable sorrow.

That same mix of love and sadness sat in my chest when I walked into the Spanish Synagogue an hour later. Built in the late 19th century, Prague’s Spanish Synagogue is the most beautiful and the most unique synagogue I’ve ever visited. Constellations of color — red, green, blue, gold — turned the walls into otherworldly canvases. Stars of David peeked from the ceiling, the windows, the borders, the columns, even the lamps. The ark reigned in midnight blue, dotted with stars, atop a bima of shining, colored marble. Light shone through stained glass windows and felt holy, making everything from the wooden pews to the metal organ gleam. 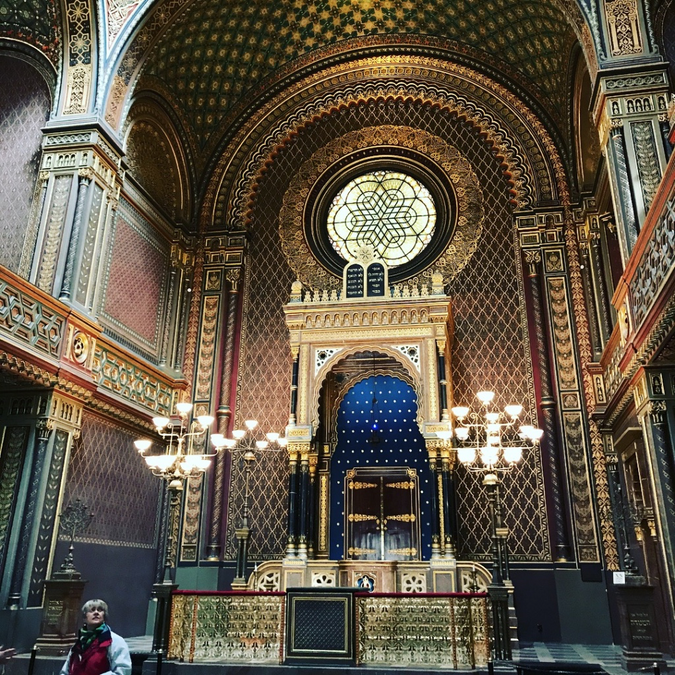 The bima/sanctuary of the Spanish Synagogue. Image by Abby White

Here, again, I stood and gaped, but with joyful amazement this time. I willed my eyes to see more than they could. I wanted to see every indentation on the ceiling, every scratch on the windows, every brush stroke on the wall. I imagined hearing Kaddish in this space, how the Hebrew would soar up to the Star of David chandelier. I walked through the synagogue overwhelmed again with love for my people, with pride in my people, who had created this awesome masterpiece.

This time, though, I felt thankful for more than just my Jewish peoplehood. I felt thankful for the cultures which helped create the Spanish synagogue. The walls would not have such stunning patterns and colors without Islamic mosques, with their intricate designs and patterns inspiring the Moorish revival movement. An organ wouldn’t sit in the balcony, nor would stained glass let in light, without the influence of Christian churches around Europe.

These mingled faiths and cultures — Judaism, Islam, Christianity; central European, Moorish, Western — birthed an astounding monument. For more than 100 years, the Spanish Synagogue has stunned visitors with its distinction and beauty. I’m not the last person who will leave the sanctuary feeling inspired, and maybe even changed.

Both the Pinkas Synagogue, with the children’s art, and the Spanish Synagogue made me feel ever more deeply how grateful I am to be Jewish, and how much I love my people. But they also underscored how much we gain when we learn from one another — and how much we lose when we build boundaries instead of bridges.

Right now, hatred for the other — whomever that may be — feels more common and insidious than ever in my lifetime. The Pinkas and Spanish Synagogues remind me why it’s so important to learn from and love my fellow human being, even when it’s hard, or I’m scared, or I’m weary. We cannot just treat others equally because we were once slaves in the land of Egypt: that’s our starting point, not our end. We must treat others equally because otherwise, every person and every culture stands to lose themselves one day.

Our world is too beautiful for us to let that happen. Our art — in drawings, in buildings — gives testament to that.

Abby White is a junior at Columbia University studying creative writing and American studies. She advocates for elephants’ safety and wellbeing in her spare time.

These Children Didn’t Survive The Holocaust, But Their Art Still Gives Me Hope