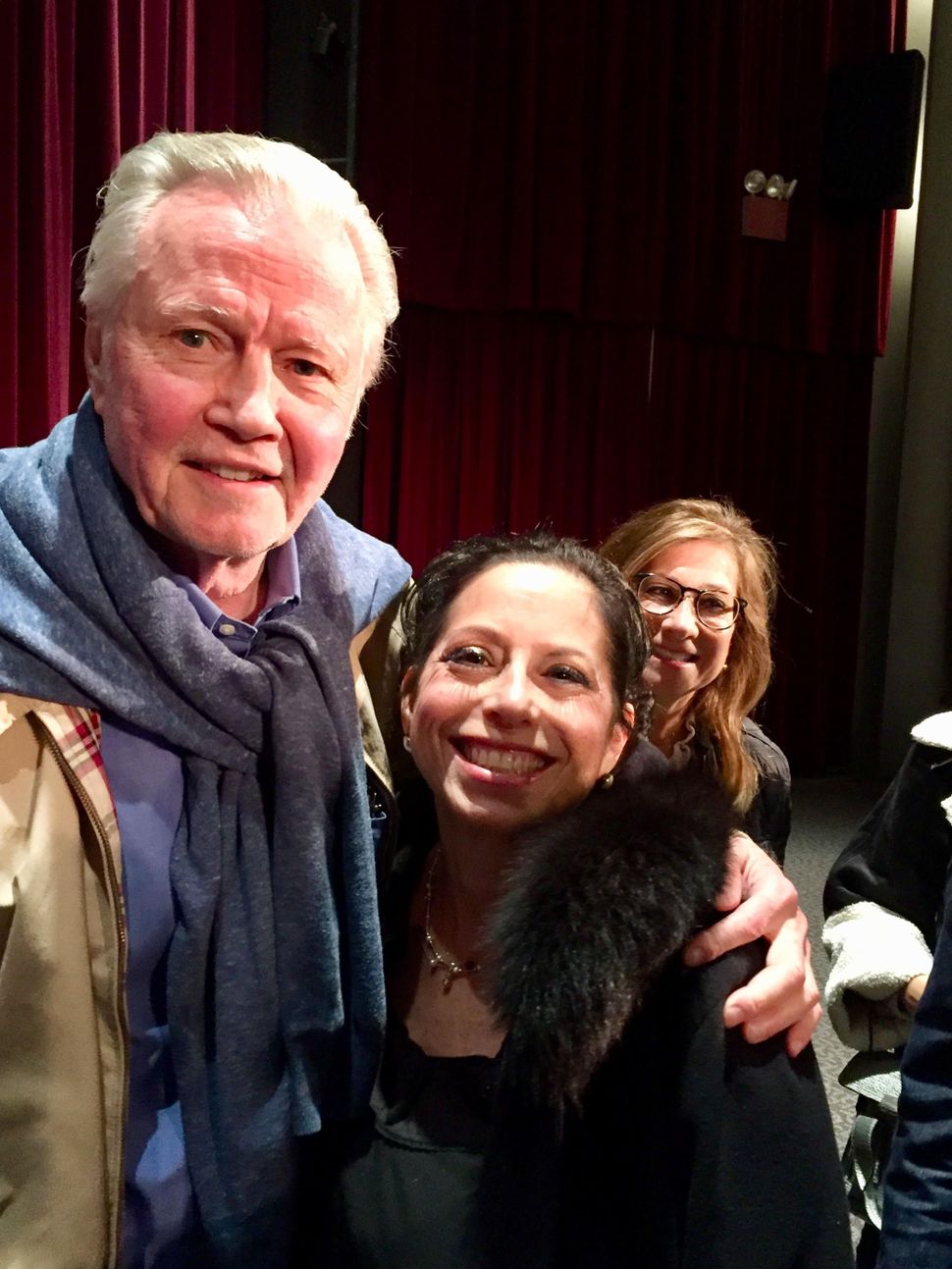 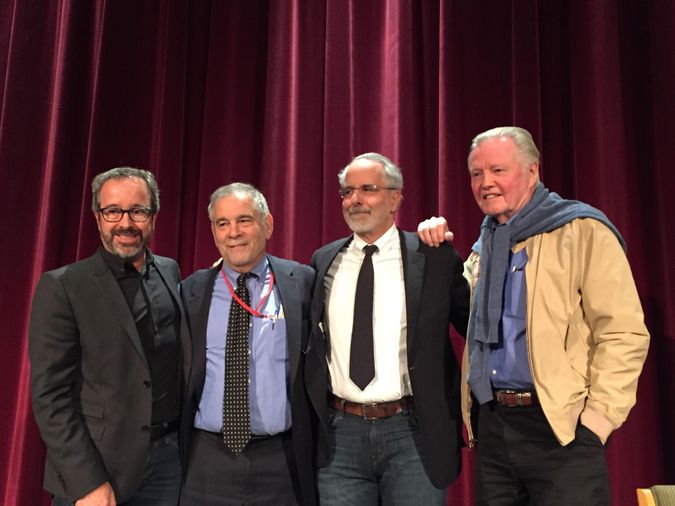 The Jewish Partisan Educational Foundation (JPEF) and the Sigi Ziering Institute of the American Jewish University held private screenings in Los Angeles and New York of the critically acclaimed film Uprising to coincide with the re-release of a curriculum about one of the most important feats of resistance during the Holocaust.

I was able to interview Jon Avnet about this project. Avnet, a Hollywood favorite, is known for his films on both the big screen and television. His projects as director, producer and writer include Risky Business, Up Close and Personal, Fried Green Tomatoes, The Burning Bed and the recent Three Christs.

Avnet told me that he is especially proud of this film. Growing up in Great Neck, NY, he never learned about Jews resisting. “It is my first project relating to my own identity,” Avnet said, adding, “I was taught that Jews went to their deaths ‘like a lamb to its slaughter.’”

This movie proves that this assumption is simply not true. Avnet told me his goal was to “give voice to those who no longer have voices.” He wanted the project to be as accurate as possible. He researched for over five years, spoke with over 250 survivors and read thousands of pages of diaries, essays and books. He also worked with some of the survivors, including Marek Edelman, whose stories were shared in the film.

Avnet showed how those with “no formal state, no military training, no money and living in the most unbearable conditions used their own chutzpah and muscle fought as hard as they could.” His portrayals also reflected the human side of each prisoner with humor and feelings of affection for others. In preparation, he had actors improvise walking through the ghetto sets. “Extra attention was given to ensure sets were realistic, and attention to detail from a brick to a door were accurate,” according to Avnet. 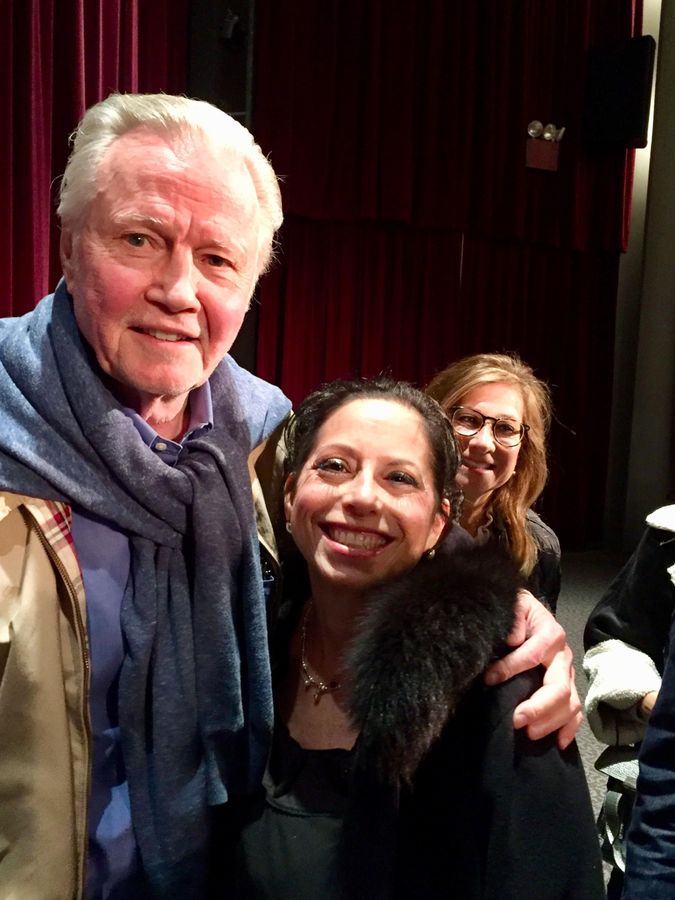 Jon Voight was nominated for an Emmy for his portrayal of Nazi officer Jurgen Stroop in Uprising. He joined Avnet at the New York screening.

Voight was honest, funny and he tells a great story, something Voight claims his father was known for. When asked about his support of Israel and the Jewish people, he said that he grew up learning about anti-Semitism at an early age from his dad. His dad told stories to a young Jon about how well Jews treated his dad as a teenager working as a golf caddy and later pro in a Jewish club in Scarsdale.

Voight worked closely with Avnet to portray Stroop realistically. He read Stroop’s diary. He found him to be banal, not sensitive and very “ordinary.” It helped him with his portrayal of the scenes in discussions with other officers, protecting a table, and enjoying wine made by French Jews.

Voight, an Academy-Award winner and one of Hollywood’s busiest and most respected actors, says is so proud of his work in Uprising. “I am so proud of this piece, my love for the ghetto fighters and rewatching it today, it importance in history,” Voight said.

A newly-revised study guide, based on the 2001 movie, was written by the foremost scholar on the Holocaust, Dr. Michael Berenbaum, who also served as an advisor on the film. It is available for educators and those interested in running programs on the topic.

Mitch Braff, Founder of the Jewish Partisan Education Foundation, seeks to educate others about a little known, yet important fact: Jews are proud partisans. “Many Jews don’t know about any partisans. There are many Jewish heroes, Jews saving Jews, and I am proud of working on this project with Jon Avnet because of its historical value,” Braff told me, adding that his organization teaches many, many stories from the past and present about partisans.

Uprising was directed by Jon Avnet (Risky Business, Black Swan) and written by Avnet and Paul Brickman. This riveting narrative recounts the 28-day Jewish rebellion, a violent resistance that lasted longer than the country of Poland did against its occupiers. All educators in attendance received copies of the Uprising DVD and new study guide. The study guide is also available from the JEPF website.

History Of The Ghetto Uprising

The Warsaw Ghetto was sealed in mid-November, 1940. Deportations began shortly thereafter, and in the summer of 1942, 265,000 Jews were deported from Warsaw to Treblinka, an extermination camp. More than 10,000 were also sent to labor camps. Just about 60,000 Jews remained in the ghetto.

Jews were told that they were being resettled to work, but many in the ghetto knew or suspected more ominous fates. Throughout the fall, groups met and organized for self-defense and to plan for resisting future deportations. The Jewish Combat Organization (ZOB) and other factions smuggled some weapons into the ghetto with support from the Polish Underground. When a deportation began on January 18, 1943, Jewish Fighters attacked, surprising the Nazis. This prefigured the later revolt and proved to the Fighters and other Jews that armed resistance was possible. The S.S. withdrew within a few days. A mass deportation had been stymied for the first time. Stunned, the Nazis began preparations for the complete destruction of the ghetto.

Over the final few days of the revolt, in mid-May, the SS set fire to the ghetto, burning it to the ground. Those Jews in hiding and still surviving were rounded up and deported to concentration and labor camps. The Jewish fighters who did not flee through the sewer system were killed.

May 16, 1943, marked the end of the Warsaw Ghetto Uprising. The main synagogue was blown up, and Warsaw’s Jewish quarter was burned and razed. The Uprising of young Jewish civilians, ill-equipped for combat and without adequate weaponry, lasted longer than some countries had held out before surrendering to the Nazis.

Over 7,000 Jews were killed. Official German records list 16 Nazi soldiers as casualties, but subsequent research suggests the number was over 300. The Warsaw Ghetto Uprising was not the first or last episode of physical resistance to the Nazis in Jewish ghettos or camps, but it was the largest and most sustained of those efforts. Subsequent rebellions in other ghettos and even in extermination camps drew on the inspiration of the Jewish Fighters of the Warsaw Ghetto.

“Preserving the vital legacies of the Jews who fought back by bringing this little-known chapter of history to the world is central to our mission,” said JPEF Board Chair Elliott Felson. “JPEF educates new generations of students about the importance of standing up and making a difference. We are honored to include Uprising with our other curricula that impacts over one million young people annually.”