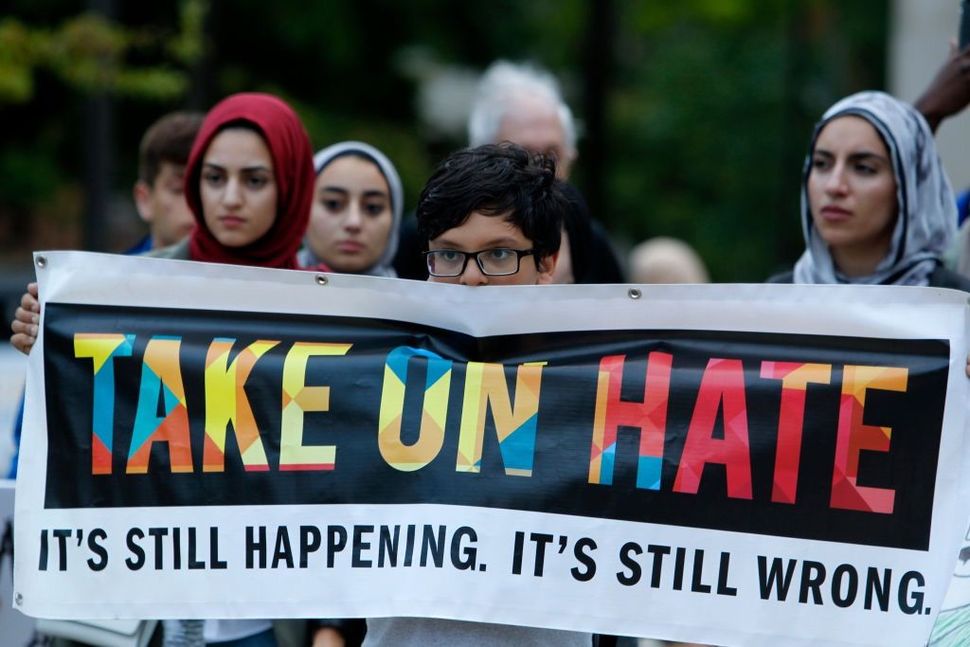 Adam Taib, 12, holds up a sign as he listens to speakers during a protest of Muslim Ban 3.0, on the campus of Wayne State University on October 4, 2017 in Detroit, Michigan. U.S. President Donald Trump’s third version of an executive order setting strict new limits on immigration that went into effect on October 18, 2017. Image by Getty

The ship sat in the waves off the coast of Miami, so close that the refugees onboard could see the lights of the city at night. Their refuge was in sight, but out of hand, as authorities turned them back to the war and persecution they fled. When the 908 passengers returned, some found safety, but 254 died in the brutal genocide that followed. This could be the story of modern-day Syrian refugees, or countless others targeted by the Trump Administration, but it’s not. It’s a scene from the frantic days leading up to World War II, as countless European Jews sought safety on our shores.

As a Jewish child, the tragic voyage of the steam liner St. Louis was seared into my mind, a uniquely grotesque tragedy from a period that defines the word “tragedy.” It didn’t just stand out because of the horrors that awaited those passengers back in Europe, but because of our own country’s indifference to their suffering. So many lives lost because of our own nation’s bureaucratic inertia, political gamesmanship and anti-Semitism. When we repeat that sacred mantra “never again,” we must commit to more than opposing genocide; we must commit ourselves to opposing those who promote indifference to human suffering.

As the Supreme Court prepares to hear arguments on the Muslim Ban in just a few days, the lessons of the St. Louis are painfully prescient. In President Trump’s Muslim Ban, we see the same nativist mindset that drove the immigration quotas of the 1930s, dooming the St. Louis and so many others seeking safety. But President Trump’s nativist attacks on Muslim immigrants and refugees is not merely an attack on our values — it’s an attack on Muslim families across New York State. Out of the headlines, the Muslim Ban has been in full force for nearly a year, blocking New Yorkers from bringing their loved-ones to the United States.

As a civil rights lawyer who works on behalf of the Muslim community, I see the impact of the Muslim Ban all too clearly. I hear the fear of the graduate students who came to New York to make a new start. They thought they could build a new life and pursue the American dream, but they now think this country has no place for them. I hear the despair of the young husband, desperate to bring his wife to join him in the United States, heartbroken that she missed the Muslim Ban cutoff by just a few days. I hear the grief of the father who wants to bring his aging father to the U.S. for medical treatment. Blocked by the Muslim Ban, he fears he won’t be by his father’s side in his last days.

No matter how the Supreme Court rules, the decision will go down in history. The only question is whether the Court will be remembered for having the integrity to stand against religious discrimination or for yielding to the president’s bigotry at the moment when our rule of law mattered most. Decades from now, I just hope that Muslim children aren’t looking back at the Court’s decision with the same heartbreak I feel when I remember the St. Louis.

Albert Fox Cahn serves as the legal director for the New York chapter of the Council on American-Islamic Relations.