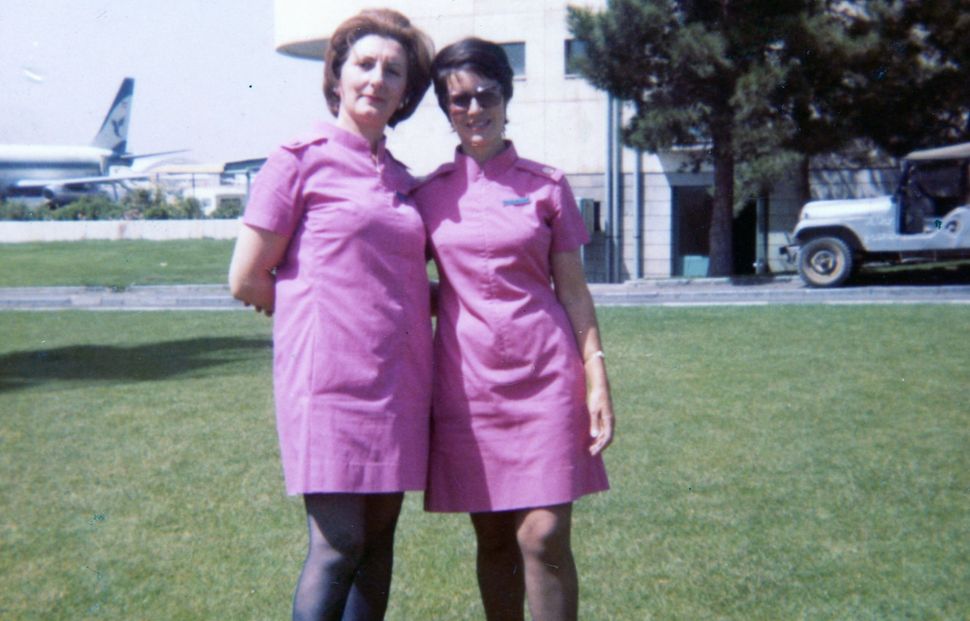 Author’s mother, Stella (left) with a coworker at Mehrabad International Airport; Tehran, 1973. An Iran Air airline plane can be seen in the background. Image by Courtesy Jacqueline Saper 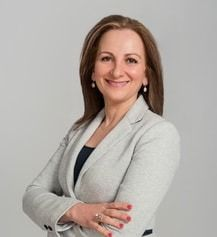 In 1897, at the first Zionist Congress in Basel, Switzerland, Theodor Hertzl predicted that a Jewish state would exist in fifty years. In 2018, the Supreme Leader of the Islamic Republic, Ayatollah Khamenei continuously repeats that the Jewish state will cease to exist in twenty-five years.

As I carry both my Iranian and Jewish identities, I regularly witness the animosity between my homeland and my holy land. Despite such hateful rhetoric, both nations have a deeply entwined history of coexistence, which has influenced both of their cultures and traditions.

My roots in the Middle East go back 2,500 years to the time of Cyrus the Great, the first ruler of the Persian Empire. In 2015, the Israel Post issued a Cyrus Declaration stamp to honor the ruler’s edict of 539 BCE that granted the Jewish people the freedom to return to the Land of Israel or to remain in Persia as free citizens. Later in the ancient Persian era, a Jewish girl by the name of Esther became the queen of the Persian Empire. The holiday of Purim emphasizes Esther’s courage and heroism to foil the plot of the king’s advisor, Haman, to destroy the Jewish people. Esther and her uncle Mordechai, who held a position inside of the king’s court, are buried in present-day Iran.

From the downfall of the ancient Persian Empire until the early 20th century, Persian culture was marred by the degradation of religious minorities, which included acts of anti-Semitism. However, there was a significant shift in this mindset in the twentieth century when the father and son Pahlavi shahs ruled the country.

Subsequently, during the idyllic decades of the 1960s and 1970’s, Iran had a favorable relationship with the Jewish State of Israel, which was exceptional in the Middle East at that time. The Israeli-Iranian friendship was mutually beneficial. Iran was Israel’s largest supplier of oil, while Israel sold weapons and built infrastructure for Iran. Israel also helped to launch Iran’s nuclear program, which is now, controversially, in the hands of the Islamic Republic.

My childhood and adolescent years were spent in an Iran that was secular and modern. Many Americans, Europeans, and Israelis worked and lived within its borders. Tehran was a cosmopolitan city that hosted many nightclubs, restaurants, and movie theaters, while radio and television programming was in both Farsi and English.

Every morning on my way from home to school, I passed the Israeli Day school, as well as the Israeli embassy building, which was a ten-minute drive from my family’s home. On the days that I didn’t have school, I would accompany my English mother to Mehrabad International Airport, where she had a prominent position as the assistant to the airport manager. This was the time when Israel’s leading airline, El Al, flew between Tehran and Tel Aviv on a regular basis, providing the means for Iranians to visit Israel as tourists or to seek advanced medical care.

Soon after the Iranian revolution, the Islamic Republic officials invited the Palestinian Liberation Organization president Yasser Arafat to Tehran. I watched his broad grin on national TV programming, as he took the keys of the then evacuated Israeli embassy. The road in front of the mission was renamed from Kach-e Shomali street to Palestine Street.

After the success of the revolution, the Iranian government shaped its foreign policy with an anti-Israel strategy. Ayatollah Khomeini declared Israel as an “enemy” and “The Little Satan” (as opposed to “The Great Satan,” the United States). Israel, in the minds of the revolutionary leadership, was not a country or a geographical reality, but a symbol of all evil. Thus, the struggle against Israel would be the battle between good and evil.

The Iranian government also promulgated an aggressive anti-American stance. However, despite such efforts, many Iranians hold a favorable view of the United States. This viewpoint is because many Iranians are aware of American movies, literature, and culture. This exposure hasn’t been readily available with Israeli culture, as the government has banned travel or communication with the ‘Zionist regime.’

In the present-day Middle East, Iran and Israel stand as two of the most potent forces in the region, as symbolized by their deepening involvement in the Syrian conflict. Ironically, both the Iranians and the Israelis have many similarities. For example, as the citizens of a Shiite country and a Jewish country, Iran and Israel, respectively, are minorities in the majority Sunni Middle East and are both surrounded by enemies.

Autocratic governments such as Iran dictate their citizens’ conduct in matters that the citizens of the free world take for granted. Iranians are restricted in how they dress, how they socialize in mixed gender settings and how they can express their opinions. The Iranian government even goes so far as to restrict their interactions with citizens of other nations, such as Israeli citizens, in settings where interactions are considered to be acceptable. For example, Iranian athletes have been reprimanded for playing against Israeli opponents, and the Iranian government and Israeli technology companies have a complex relationship, as evidenced by the Iranian government’s decision to ban the “Waze” navigation application on many occasions.

Although certain formats of social media such as Facebook are illegal in Iran, many have found ways to bypass the state’s Internet filtering system. Such platforms are a place where the citizens of both nations can find common ground. Through social media or Farsi speaking programming broadcasted into Iran, Israelis can break the cultural barrier by introducing the many aspects of the Israeli society such as food, books, and movies to the Iranians.

As an Iranian Jew or as a Jewish Iranian, I fall within the narrow slice of the population that consistently sympathizes with both cultures, as they have both shaped a significant portion of my identity. And as I reminisce about the halcyon days of my past, I long for the days when Israelis will fly to Iran once again, not via F-16 fighter jets, but via El Al passenger planes.

Jacqueline Saper is an author whose forthcoming book, From Miniskirt to Hijab: A Girl in Pre- and Post-revolutionary Iran, is scheduled to be published by the University of Nebraska Press-Potomac Books in spring 2019.