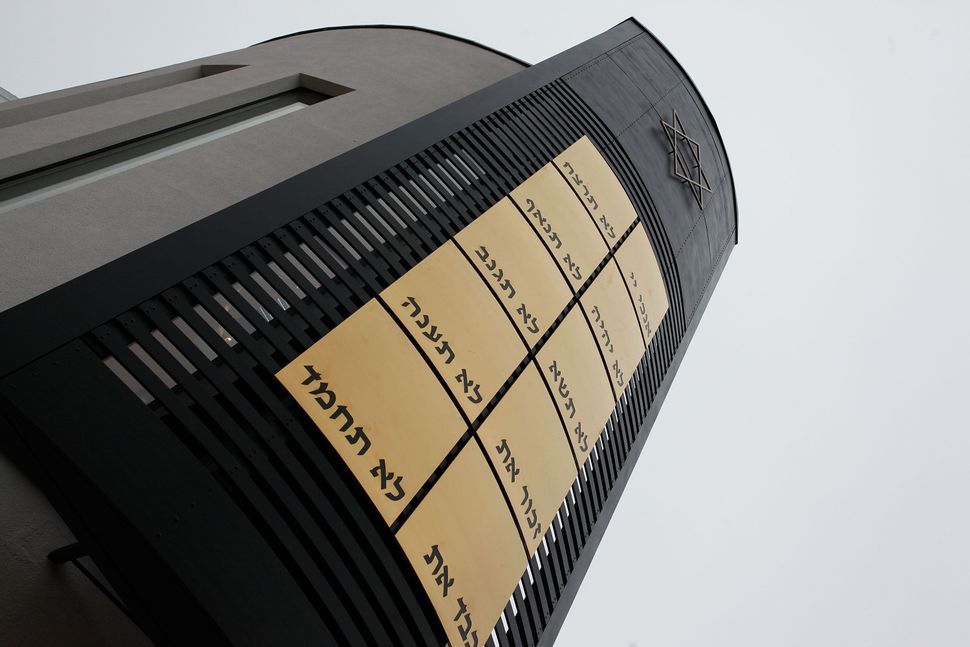 The Ten Commandments, written on metal plates are attached to the new synagoge on November 9, 2011 in Speyer, Germany. Jews first settled in Speyer in the 11th century and by the Middle Ages Speyer was among the most important centers of Jewish life in central Europe. The Nazis burned its synagogue in the infamous Kristallnacht pogroms of 1938 and by 1945 only one Jew remained in Speyer. The Jewish community began to revitalize in 1996 with the influx of Jews from the former Soviet Union. Image by Getty Images

There is a great political cartoon I saw recently entitled “Genesis of the Trial Attorney.” The single-framed cartoon depicts Moses coming down the mountain with the tablets of stone in his hands. The Jewish people stand below, seemingly ready to accept the law in its fullness, when one man comes forward with confidence and opines, “OK… You say ‘commandments’ but I hear ‘recommendations’…”

As Shavuot nears, and we prepare ourselves to re-accept the Torah and its laws anew, the crafty assertion made by this fictional attorney bears great consideration — Not just for those who stood at Sinai, but for all the future generations of Jews who would come from that notable generation. For even if those at Sinai accepted the Torah’s laws with their celebrated cry of consent, “na’aseh v’nishma” (“we will do and then we will understand”), all future generations did not. What, then, obligates us in this divine contract? After all, can a parent accept a contract that extends to their children who have no say in the matter? 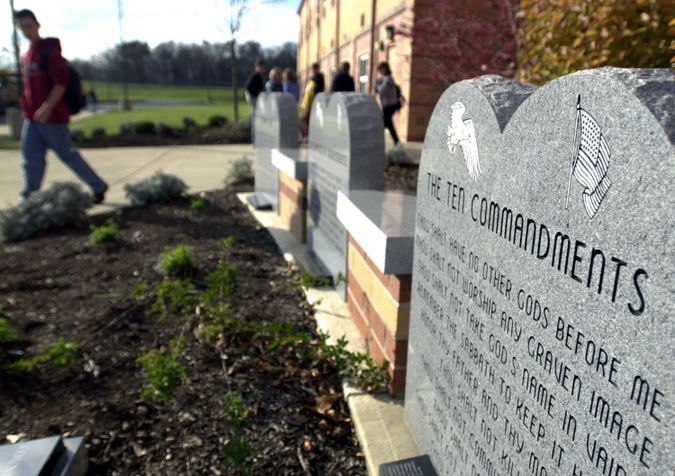 A depiction of the Ten Commandments is shown outside of Peebles High School November 20,2002 in Peebles, Ohio. A federal Appeals Court has ordered the school to remove the marker. Image by Getty Images

We know that Torah literature takes our obligation of Torah law as a given. After all, they are called the 613 mitzvot — which means “commandments,” not “good deeds,” as the word “mitzva” is so often mistranslated to. What is, then, the halachic mechanism that binds later generations of Jews to the Sinaitic commitment of their forefathers?

The Talmud states, “kvar mushva ve’omed me’har sinai: a Jew is already sworn in at Mount Sinai. None other than Nachmanides (1194-1270) tackles this thorny issue. In Nachmanides’ opinion, the oath of an entire nation is fundamentally different than the oath of an individual. Whereas an individual can only obligate himself in a contract or oath, a national oath passes on to all future members of that nation.

In my mind, I imagine this contract between the Jewish people and God as similar to a treaty made between nations. Even if the presidents of the countries who negotiated a peace agreement were to die (or similarly, if the citizens that elected those officials were to die), the treaty is still binding on the nation. Why? Because the agreement itself ultimately lied between larger entities, in this case countries, and those entities are alive and well. So it is with the oath made at Sinai. The nation itself accepted the Torah, and all future members of the tribe are entered into the agreement of “na’aseh v’nishma” as a result. 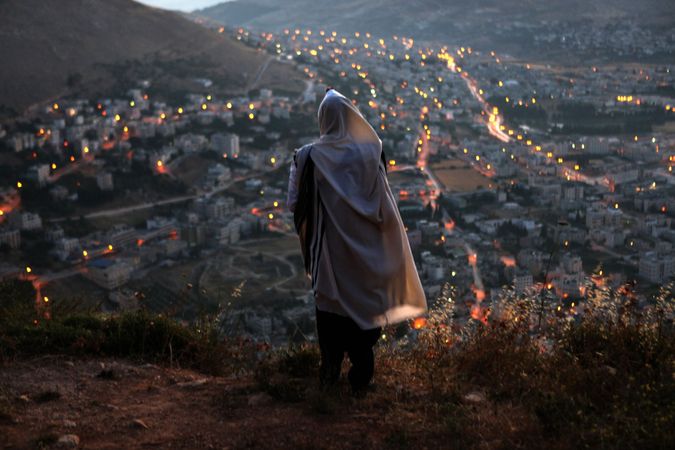 An ultra-Orthodox Jew prays on Mount Gerizim overlooking Joseph’s Tomb, one of Judaism’s holiest sites, in the West Bank city of Nablus on May 28, 2009 Image by Getty Images

I’d like to offer a fresh approach to our original question based on the scholarly writings of Rabbi Yosef Dov Soloveitchik (1820-1892), known throughout the Torah world as the Beis Halevi. The Beis Halevi (Drushim, 17) was bothered by a different component of the “na’aseh v’nishma” oath. He contends it’s odd that the Jewish people’s oath was ever considered halachically valid in the first place. Jewish law states that a commitment is not considered legally binding unless all of the details and requirements of that commitment are clearly specified and delineated at the time of the agreement (Shulchan Aruch – Choshen Mishpat 207:21). In the case of the Jews at Sinai, the proverbial cart most certainly came before the horse, as their national pledge proceeded the delineation of the vast majority of the commandments.

The Beis Halevi offers this logical solution: halacha allows a person to sell himself as a slave (the nature of the unique type of slavery that the Torah allows is beyond the scope of this article). A slave does not know exactly what kind of work he will be forced to do by his new master, nor the number of hours his work will entail. Nevertheless, such a sale is halachically valid. Why?

According to Rabbi Soloveitchik, the reason is because a slave is selling himself and his body — something quantifiable. What a slave is not doing is agreeing to a series of future unknown obligatory tasks, as that would most certainly be ruled an invalid agreement.

So too, says the Beis Halevi, the Jews at Mt. Sinai were not merely agreeing to a series of yet unspoken laws (something considerably problematic in halacha). Rather, they were offering themselves, their whole selves — body and soul — to God as servants. And so we read, “For the children of Israel are servants to Me, they are My servants, whom I have taken out of the land of Egypt — I am Hashem your God” (Leviticus 25:55).*

As for Nachmanides, who held that the oath of “na’aseh v’nishma” was a valid oath to begin with, I believe that he could answer the Beis Halevi’s question in the following manner: The reason why halacha invalidates commitments made without complete foreknowledge of what is at stake is because of the estimation of Chazal(the Sages) that people do not fully accept such commitments in their hearts. While this may be true in dealings between man and man, in dealings between man and God, it is logical and fair to assume that the law would be different. After all, aware that God is a loving Father, and that whatever future acts God might ask from man would be in our full and best interest, it is reasonable to assume that human beings would fully accept unstipulated divine covenants. (See the Chida in Devarim Achadim, drush 5 for Shabbat Kallah p.65a for a similar approach)

Based on this novel interpretation of the Beis Halevi, perhaps we can suggest that the reason why all future generations are obligated in a Torah that they themselves never swore allegiance to is because they were born to people who had given themselves to God as servants — And a child born of a slave is a slave himself.

Human beings tend to become enslaved by something over the course of their lifetimes. For some, it is the pull towards money and possessions that enslaves, while for others it is the accumulation of honor and acceptance by friends and society or the demand for constant pleasure and entertainment — anything to distract us from the tedium of life itself.

How blessed are we Jews, then, to instead be servants of God Almighty, servants to a loving Master who desires our best and rewards us fully for our good deeds. Ashreinu! How lucky are we to be bound by laws that not only uplift, but sanctify us.

Such servitude is yet freedom by another name.