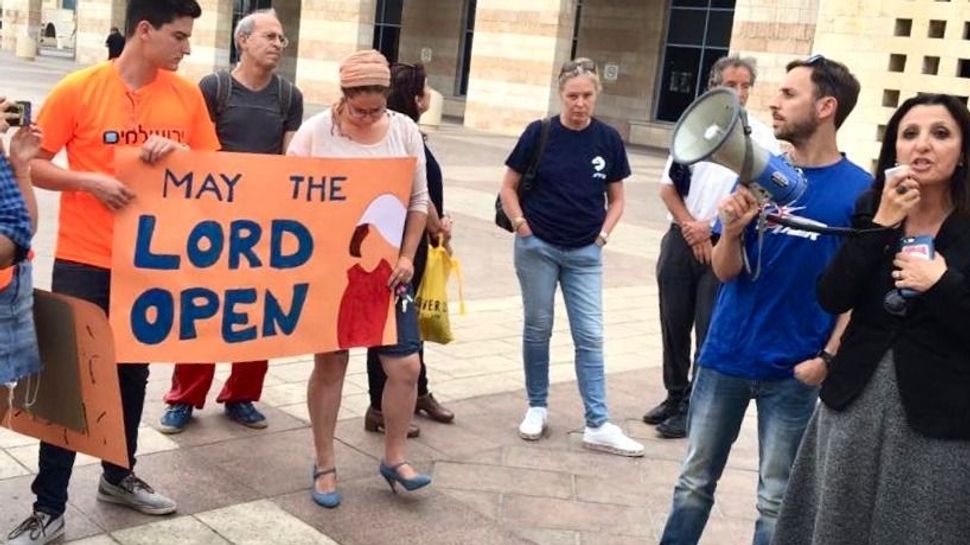 Supporters of the Yerushalmim Party holding a sign inspired by The Handmaid’s Tale outside City Hall following the Jerusalem Council vote to close the First Station on Shabbat. Image by Fleur Hassan-Nahoum

From the moment Atwood’s book was converted by Bruce Miller to a multi-award winning TV series, comparisons haven’t stopped between the horror it depicts and the potential evils of populist nationalism inspired by extremist interpretations of sacred texts.

When writing the novel in 1985, Margaret Atwood made a rule for herself that her work of fiction would not include anything that human beings had not already done in some other place or time, or for which the technology did not already exist. In explaining her rationale, she said “I did not wish to be accused of dark, twisted inventions, or of misrepresenting the human potential for deplorable behavior. The group-activated hangings, the tearing apart of human beings, the clothing specific to castes and classes, the forced childbearing and the appropriation of the results, the children stolen by regimes and placed for upbringing with high-ranking officials, the forbidding of literacy, the denial of property rights; all had precedents, and many were to be found not in other cultures and religions, but within Western society.”

As we live through the #Metoo era, with an American President who was elected despite bragging about sexual assault, the imagery of the red capes and white bonnets has become a potent symbol of protest for women’s rights the world over.

In Jerusalem, the age old question around the status of Shabbat has again become a heated topic of debate. On May 17, the Jerusalem municipal council voted 15 to 10 in favor of an appeal brought by ultra-Orthodox council members protesting the popular First Station entertainment and cultural park being open for business on Saturdays. The appeal called to revoke permission given to the compound to keep its doors open on the Jewish day of rest.

Following the vote, the secular parties in the council including Meretz, Yerushalmim and Hitorerut were outraged. Fleur Hassan-Nahoum, who was born in London and raised in Gibraltar, currently serves as councilwoman on the Jerusalem Municipal Council. Following a demonstration outside City Hall she wrote on her Facebook page, “This evening we lost a vote but we will win the fight. Acceptance and mutual respect are Jewish values that we must practice and cherish. To my disappointment, my colleagues in the Ultra-Orthodox parties forgot about them this evening. However the first station will not close. The regional committee has the final word and they will make the right decision.”

Below the text, she included a photo from a supporter of her Yerushalmim party holding a sign with a woman from The Handmaid’s Tale saying “May the Lord Open.” In Atwood’s dystopian world, “Blessed be the fruit” is a common greeting for a handmaid forced into surrogacy servitude, which elicits the answer “May the Lord open.” Using this slogan on placards to support the First Station is a clever and perhaps subversive reframing of what “the Lord” may in fact want open on Shabbat.

Far across the Mediterranean Sea in Ireland, a similar battle for women’s rights has also split the country for months. Ireland’s abortion laws are anchored in the eighth amendment to the country’s constitution. They are among the most restrictive in Europe, with abortion effectively outlawed in nearly all cases, including rape, incest or crisis pregnancies.

In the lead up to the May 25 referendum on the eighth amendment, The Handmaid’s Tale has been a frequent reference point for supporters of the #Repealthe8th Campaign led by a number of different groups including ROSA (for Reproductive rights, against Oppression, Sexism & Austerity).

ROSA is a socialist feminist and pro-choice activist group in Ireland named after Rosa Parks, the inspirational black campaigner who famously refused to give up her seat for a white passenger, and Rosa Luxemburg, a leading socialist theoretician and activist of the early 20th century, killed for her revolutionary politics in 1919.

In the lead up to the referendum vote, ROSA organised crowds of young women wearing the signature red capes and white bonnets from The Handmaid’s Tale on the O’Connell Bridge in the Irish capital of Dublin behind a sign reading “Forced pregnancy is not OK.”

Keishia Taylor of ROSA told hotpress.com that Handmaids represent the lifestyle that some of the more extreme ‘Vote No’ spokespeople actually aspire towards. “No contraception, no tampons, no evil literature! All these ridiculous things, a list of things that the Catholic Church has actually tried to ban and the ways that they’ve repressed women.”

In 1984, nearly 90% of Irish Catholics went to Mass every week. But by 2011, only 18% did. Dr Daphne Halikiopoulou, who is a Fellow in Comparative Politics at the London School of Economics, has attributed this to declining external threat perceptions in Ireland as a result of the Good Friday Agreement that have served to reduce the ability of the church to portray itself as the principal carrier of a threatened and vulnerable Irish national identity.

This decline of the scandal ridden church that has been unyielding in it’s views on marriage, divorce, baptism, contraception, abortion and homosexuality are increasingly being challenged or simply ignored. Halikiopoulou suggests that this has led to the emergence of a more civic version of Irish national identity, rather than a religious, ethnic and exclusive one.

This is not the first referendum Ireland has had on a social issue of priority to the Catholic Church, with the change in attitudes being nothing short of remarkable.

Only 34.6% voted for the twelfth amendment in 1992 that would have made abortion legal when necessary to save the life of the mother. By 1995, the tables had turned for religious liberals and secular humanists where 50.2% voted in favour of legalising divorce. In 2015, an impressive 62% voted for Marriage Equality. By 2018, an overwhelming 66.4% voted for a woman’s right to choose through repealing the eighth amendment, paving the way for the legalisation of abortion subject to consultation with a doctor and a short waiting period. In an ideal world, basic rights like these shouldn’t be the subject of public opinion. However the increasing support at each Irish referendum is an impressive victory over the forces of conservative religious coercion that led each ‘No’ campaign.

Perhaps the trend in Ireland will likewise be reflected in Israel, where religious liberals and secular Israelis are fighting similar battles against parts of the Orthodox establishment on issues such as marriage, divorce, non-Orthodox prayer at the Kotel, conversion and Shabbat.

Yet unlike Ireland, Israel is a country whose religious identity is very much connected to a national identity whose legitimacy is constantly being challenged from both internal and external critics.

However, for those who seek a more liberal and pluralistic expression of Judaism in Israel, one can take inspiration from the Irish example that when conflict subsides, so does attachment to coercive interpretations of religion.

For the sake of both Judaism and democracy in this country, to all the groups fighting to make the world’s only Jewish State more tolerant and accepting of diversity for all, I say “Praise Be!”