Learning About Motherhood — And Addiction — Through Horses 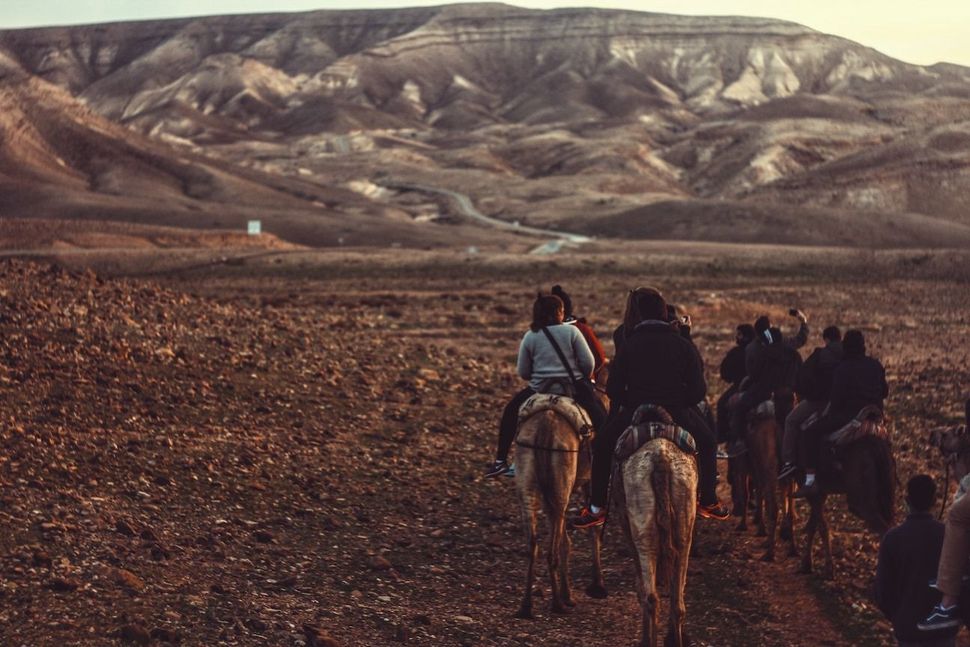 A group riding on horseback in the Negev, Israel. (Photo by Greta Schölderle Møller/Unsplash) Image by Unsplash

Adina wanted to run, to fly, to get lost in the motion of the horse.

I wanted to help her get there. After weeks of teaching her techniques and building her confidence, I felt she was ready.

We reviewed the appropriate motions — hands, feet, voice. She nodded.

I nodded back, giving her the green light.

Adina made the motions — hands, feet, voice. The horse leaned into the run, took one step, then fell back to a jogging pace.

I encouraged her to try again.

She tried again, with the same result.

I could see the problem clearly. Her feet were telling the horse to go, but her hands were pulling on the reins, holding the horse back.

I told Adina what I saw from the side. She nodded in understanding.

Adina tried again. And again and again. I broke it down more, I talked theory, I demonstrated. Adina understood everything, yet she never got more than a running step or two from the horse.

After she dismounted, we sat and talked. What happened up on the horse was not just about horseback riding; it mirrored her approach to many aspects of her life. Adina sets goals, she takes action… and she stays stuck. The horse was showing her why she was stuck. She thought she was spurring the horse forward, when really she was giving a mixed message. She thought she gave something her all, while she unconsciously sabotaged her efforts.

Adina didn’t want to believe that. She referred to the horse by a few choice names and insisted he was to blame, because he refused to listen. Furthermore, I was to blame, because I couldn’t clearly see what she was doing. And besides, I couldn’t possibly understand her frustration since, obviously, I’d been born riding and had never experienced what she was experiencing.

I learned to ride around the time I became a grandmother.

Seeing the world, as I do, through the eyes of a mother, I discovered that a horse is a lot like a toddler: inquisitive, feisty, finicky and determined (leaning toward stubborn). He finds it difficult to wait, doesn’t understand much reason, and requires lots of consistent handling. He is quite certain he knows what he wants, and equally certain that it is good for him.

The trick with kids is to convince them that what you want is also what they want. Only it’s not a trick.

While many parents — especially inexperienced parents — believe you can control children, I learned long ago that you can guide and influence, but you can’t actually make a child do anything against his will. He might be smaller and less powerful, but in any showdown he can draw quicker, shoot farther and, if all else fails, crawl under the bushes. Of course, you can shackle him (physically or emotionally), but even then your control is only temporary; and besides, you’ll probably lame him in the process. Rather than rule by force, it’s more effective to create situations in which the child chooses what you want him to choose.

When I started seeing through the eyes of a riding instructor, the horses began to teach me a lot about myself, and I began to see many parallels between my riding style and my parenting style. My first reaction is at times too sharp, causing the horse to overreact, overcorrect or fear me; sometimes, I don’t react quickly enough or strongly enough. After the horse repeatedly acts a certain way in a given circumstance, I often grow tired and give in. I make the same mistakes over and over again, and yet expect the result to be different. I am sometimes entirely sure that I am giving one message, while really I am giving an entirely different message.

I see a lot of Adinas. While most of my private clients are young women with addictive tendencies, maladaptive behaviors and eating disorders, Adina had long ago crossed the line into full-fledged addiction. Painkillers took over her life, sending her kids into foster care and Adina into rehab. She went to Retorno, the world’s largest Jewish organization for the prevention and treatment of addiction, where my specialty is utilizing horses to apply the 12-step model for addiction treatment.

What the Adinas don’t know is that they are stuck because fear holds them back — fear of success and fear of failure; fear of connection and fear of isolation. Change is so frightening that they are compelled to hold on to their dysfunctional behaviors and maladaptive thoughts, despite the awareness that there just might be another way. Change means letting go of a crutch you have depended on fully for many years, knowing perhaps that there is a safety net, yet not being able to believe that it will actually hold you.

I’ve made all the same mistakes as Adina: confusing the horse with contradictory commands, trying to overpower him, giving in and giving up. As I learned to enlist the horse’s cooperation instead of trying to force it to obey my will, the result was a more compliant horse — and a much more enjoyable ride. I strive to bring that awareness into my life, and especially into my parenting. I’m still refining my techniques, examining my style… and enjoying it more all the time.

Shoshana Schwartz is a therapeutic horseback riding instructor and addictions counselor at Retorno. She is the author of four books and a regular contributor to Mishpacha magazine.

Learning About Motherhood — And Addiction — Through Horses