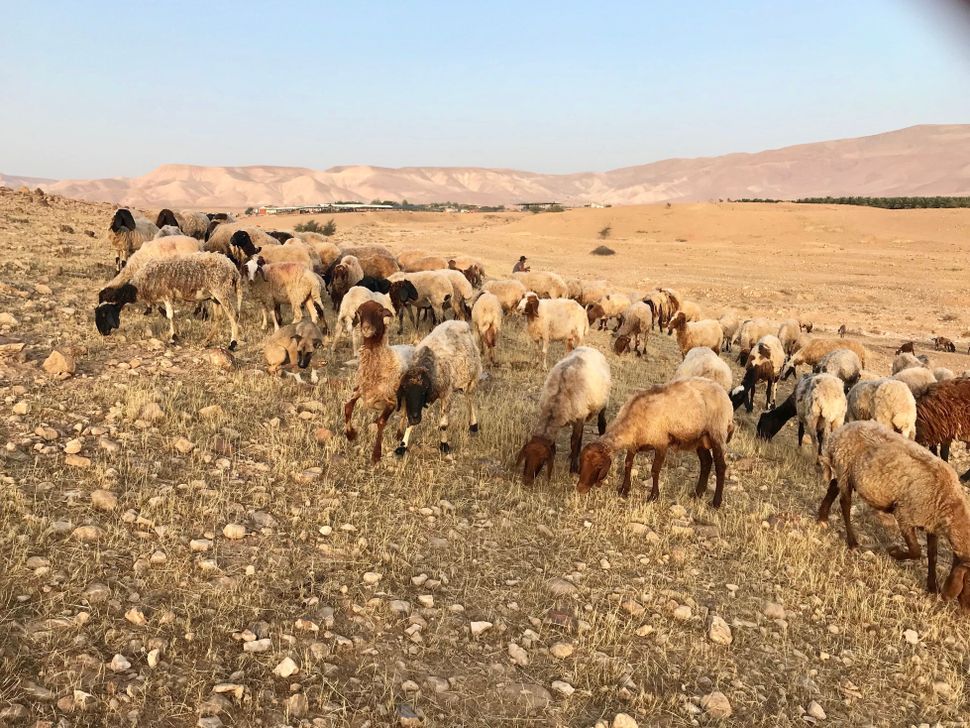 Bassam’s flock grazes in the Occupied Jordan Valley near the Palestinian town of Ouja. Omer’s farm can be seen in the distance. (Photo taken by the author) Image by Zak Witus After years of reading, writing and arguing about the place, I finally visited Israel and Palestine for the first time back in February, under the auspices of Achvat Amim, a five-month-long educational and volunteer program founded upon the principle that every person has a right to self-determination in the place that he or she calls home. During my nearly half-year stint, I lived cooperatively with my fellow participants in Jerusalem, interned at the binational Palestine-Israel Journal and worked two days a week at Tent of Nations, a Palestinian farm just south of Bethlehem. In the course of Achvat Amim, I saw many aspects of the Israeli occupation that shocked and horrified me — from the kangaroo military court system to violent police crackdowns on Jerusalem Day — but it was in the Jordan Valley where I witnessed the kind of routine harassment, territorial encroachment and flagrant human rights abuses that constitutes the essence of the Israeli occupation for a broad swath of Palestinian society.

In the last six weeks of the program, I went out a few mornings every week with Rabbi Arik Ascherman of Torat Tzedek and a couple of friends to accompany Bedouin shepherds in the Jordan Valley, serving as a protective presence against the omnipresent threats of radical settlers and the Israeli army. My friends Sasha and Adam and I would wake up at 4:00 a.m. in our apartment in West Jerusalem, try to make some eggs without waking up our housemates, assemble our thermoses of coffee, and then walk to the bus stop where Rabbi Arik would pick us up. We’d then drive out of Jerusalem through a military checkpoint into the West Bank, ultimately descending into the Jordan Valley as the sun rose over the mountains of the country of Jordan to the east. On the ride, Rabbi Arik would phone ahead to the Bedouin of the town of Ouja, giving them our estimated arrival time. One of the locals, Bassam, had asked for our protection.

Prior to a year ago, Bassam and his brothers had basically given up trying to graze their flocks in the area around their family compound. They had stopped trying in 2003 after the notorious Jewish settler Omer Atidiah moved into their region of the Valley just north of Jericho. Bassam told me that, one day, he was out with his sheep and goats, allowing them to graze as he had for his whole life, when Omer showed up, informing Bassam that this land belonged to him now and Bassam needed to leave. Since then, Omer has set up a homestead, “Omer’s Farm,” for himself and his seasonal workers along with large date and olive plantations, creating what’s known as an illegal outpost: a settlement that is illegal under Israeli law, unlike other Israeli settlements. The state of Israel often acts as if these outposts aren’t illegal, as it will often connect them to the electrical and water networks — basic services which Israel denies Palestinian communities in the West Bank under its control. Furthermore, the army will actually serve as security guards for these illegal outposts, as it does for Omer’s. All Omer has to do is call the army, and they will quickly come and expel the Bedouins if they venture even remotely close to his olive or date plantations.

About a year ago, Rabbi Arik, along with members of the Israeli activist group Ta’ayush (Living Together), came to Ouja from Israel proper at the shepherds’ behest and helped them resume grazing in the Valley. The work is very straightforward and simple: We walk with the shepherds out to where the grass is. When we accompany them, the settlers rarely show up, but instead call in the army, who pull up in their military jeeps, armed with M16s. Sometimes they present us with a tz’av (an expulsion order) declaring the area “a closed military zone,” in which case we comply — assuming that it’s a current order, which it isn’t always. Sometimes the army shows up without an order and just tries to intimidate the shepherds into leaving. With Israelis and internationals like me present, the army usually shows greater restraint than they would if it were just them and the Palestinians. 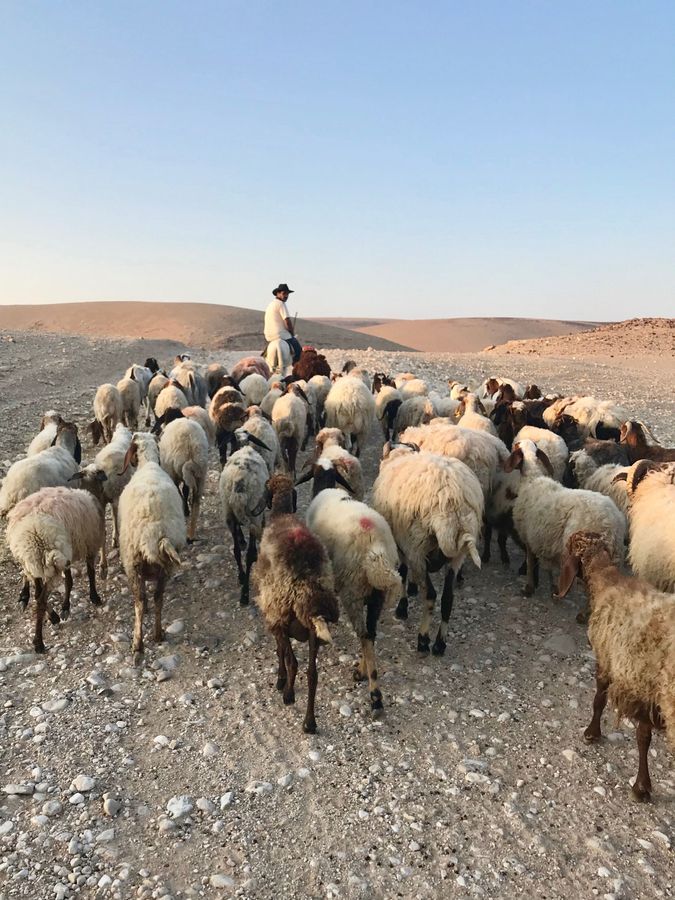 Bassam, mounted on his donkey, leads the flock out to graze. (Photo taken by the author) Image by Zak Witus

In every scenario, we always follow the shepherds’ lead: If they want to stay, we stay; if they want to go, we go; but in no case have we ever disobeyed a military order.

When the shepherds have gone out without us present, they’ve told us that Omer and his cronies will try to disperse the flocks by driving their ATVs through them. The shepherds and the Ta’ayush activists told me that Omer and his gang often harass Bassam and his family with threats of violence. The settlers are armed, and we have found bullets and bullet casings in the area that Bassam claims are from the settlers.

In other places in the Valley, settlers have sicked their dogs on flocks, bloodying the sheep and — in a case my friend Sasha documented — ripping off a tail. If the shepherds can’t graze, they must buy bales of hay, a practice that is expensive and financially unsustainable.

Those of us who spoke Hebrew and Arabic, like my friend Adam, also served as intermediaries between the army and the shepherds. One morning when Adam, Sasha and I were out with Bassam, two soldiers showed up — surely at Omer’s request — and presented us with a tz’av, ordering us to move back half a kilometer. No’am, one of the soldiers, already knew Bassam’s name, though Bassam later said that he had never met No’am before.

After some brief conversation, we complied, trekking back the way we came. But then the two soldiers came after us. Adam, Sasha and I stopped while Bassam kept riding along with the flock.

“Why are you f—king with me?” No’am asked, stomping over to us.

“What? We listened to your order,” we said.

Bassam kept riding his donkey in the direction that No’am had previously instructed.

“Bassam! Come here,” No’am shouted in Arabic, using one of only a few Arabic phrases that the army teaches soldiers.

Bassam did not answer and continued to ride away.

“I don’t know how much you’re paying him, but tell him to come over here now,” No’am said to us in Hebrew. (There’s an absurd narrative, popular among the settlers in the area and apparently believed by the army, that we “anarchists” pay the Bedouin to incite the settlers and the army with their flocks.)

No’am then raised his assault rifle and pointed it at Bassam.

“Stop or I’ll shoot!” No’am shouted, using the other Arabic phrase he knew.

In stunned silence, Adam, Sasha and I were all freaking out. Was No’am going to kill Bassam today? My heart was beating against my ribcage and my hands began to shake. This soldier, who was probably my age (24) or younger, looked poised to end this man’s life — and for what?

No’am ultimately lowered his weapon and told us to inform Bassam that the next time he saw him, he would arrest him.

No’am and his partner left and we hiked over to Bassam, who looked distraught. He told us that he feared that the army would come and snatch him from his bed, from beside his sleeping children, in the middle of the night — a common technique of the Israeli military. To make all this worse, Bassam had not eaten all morning because he was fasting in observance of the Muslim holy month of Ramadan.

Looking around at the rocks and gravel, Bassam told us that it was time for us to go back: “There isn’t anything for the sheep to eat here anyway,” he said.

What if we hadn’t been there? Like a tree falling in a forest with no one there to hear it; No’am might have cut Bassam down and, as far as Israel and America are concerned, his death would not have made a sound. No’am would have later told his commander that Bassam had threatened his life, and no one would have ever heard about it — that is, other than Bassam’s wife, kids, brothers, mother, and so on. For the vast majority of Israelis (and Americans), it would have been as if it had never happened.

Zak Witus is an educator and political organizer. He holds a master’s in Middle Eastern Studies from the University of Chicago. Follow him on Twitter @ZakWitus