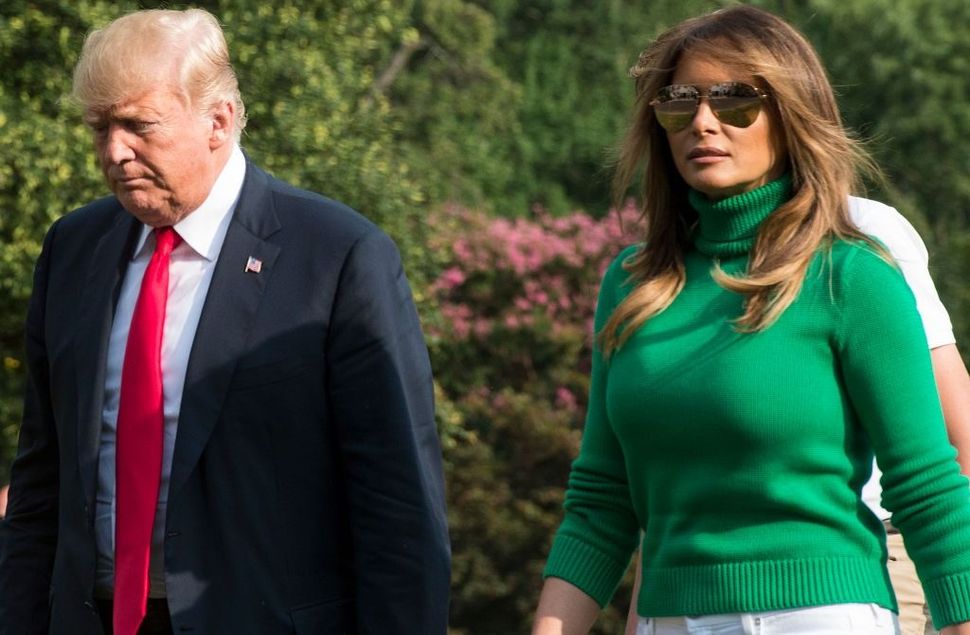 US President Donald Trump and First Lady Melania Trump arrive on the South Lawn upon their return to the White House after a weekend in Bedminster, in Washington, DC on August 19, 2018. Image by Getty Images

Pundits have made much of the fact that First Lady Melania Trump is campaigning against cyber-bullying — verbal abuse carried out via electronic means — at the same time that her husband Donald Trump is unleashing daily name-calling tirades on Twitter.

Intra-family conflicts make for fascinating reality television story lines, all the moreso when it’s the First Family. And it is no surprise that critics would seek to highlight what they perceive as hypocrisy among the Trumps.

But the premise at the heart of such criticism is troubling. The notion that it is newsworthy if a First Lady differs from the president implies that we should always assume the First Lady agrees with her husband’s policies, actions, or attitudes.

First Ladies generally have kept their disagreements with their husbands behind closed doors. But there have been exceptions. Betty Ford in 1974 publicly took a position on abortion that was more liberal than that of her husband, President Gerald Ford. And Hillary Clinton in 1998 called for the creation of a Palestinian state, at a time when her husband, President Bill Clinton, publicly opposed it.

Perhaps the best known example of a First Lady differing from a president was Eleanor Roosevelt’s dissent with regard to the treatment of minority groups — especially African-Americans and Jews.

Roosevelt invited black leaders to the White House, championed increased government help to impoverished African-Americans and resigned from the Daughters of the American Revolution when the DAR blocked an appearance by African-American singer Marian Anderson at Constitution Hall in 1939. The First Lady’s high-profile efforts against racial discrimination often discomfited President Roosevelt, who feared she would harm his standing among Southern congressmen and voters. FDR was especially incensed by Eleanor’s support for anti-lynching legislation.

Supreme Court Justice Thurgood Marshall told his biographer, Carl Rowan, that he listened on a telephone extension as Attorney General Frances Biddle discussed the Odell Waller case with President Roosevelt in 1942. The First Lady publicly supported clemency for Waller, an African-American sharecropper sentenced to death for shooting his white landlord. According to Marshall, FDR declared, “I don’t want to hear anything more about Eleanor and her [n-word].”

Roosevelt also took an early interest in the plight of the Jews in Nazi Germany. In 1933, she brought Dr. Alice Hamilton, who had recently spent time in Germany, to brief the president on life under the Hitler regime. The meeting failed, however, to persuade FDR to speak publicly against the persecution of German Jews. Determined to maintain friendly relations with Nazi Germany, the president said nothing until after the 1938 Kristallnacht pogrom.

Eleanor let it be known that she supported the 1939 Wagner-Rogers bill, which would have permitted the admission of 20,000 German Jewish refugee children outside the immigration quota system. By contrast, the president refused to back the bill, which was buried.

The First Lady did manage to persuade the president to issue five hundred emergency visas for prominent artists, writers, and labor activists, many of them Jews, who were trapped in Vichy France in 1940. She was able to convince FDR by arguing that the intellectual and artistic elite of Western civilization were in danger. A year later, however, the man organizing the rescue of those refugees, Varian Fry, was forced to leave France when the Roosevelt administration canceled his passport in response to complaints by the Germans.

Roosevelt successfully intervened with the president to secure the admission of 86 refugees aboard the S.S. Quanza, which docked for coal at Norfolk, Virginia in September 1940 after being turned away by several South American countries. Assistant Secretary of State Breckinridge Long complained bitterly about the First Lady’s interference. The feeling was mutual: Mrs. Roosevelt once remarked to the president about Long, “Franklin, you know he’s a fascist.” FDR reportedly snapped in response, “I’ve told you, Eleanor, you must not say that.”

The First Lady’s friendly connection with the Jewish activists known as the Bergson Group is particularly noteworthy, since the Bergsonites challenged the Roosevelt administration’s abandonment of the Jews in hundreds of newspaper ads and rallies in 1943-1944.

In March 1943, Roosevelt attended the Washington, D.C. performance of Bergson’s “We Will Never Die” protest pageant, and wrote about it in her “My Day” syndicated column — thus making millions of American newspaper readers aware of the plight of the Jews.

Later that year, at Bergson’s request, the First Lady authored a message of hope to the Jews under Hitler’s rule, which was broadcast by short-wave radio to Europe. Bergson met with Roosevelt in the White House on several occasions. After one of those meetings, the First Lady wrote a “My Day” installment about the suffering of Europe’s Jews, arguing that the United States should not “let great wrongs occur [to the Jews] without exerting ourselves to correct them.” Sadly, her husband did not agree.

First Ladies who speak out for good causes, even if it means crossing swords with the president, deserve to be praised for their courage, not scorned as hypocrites. It’s not easy being married to a man like that.