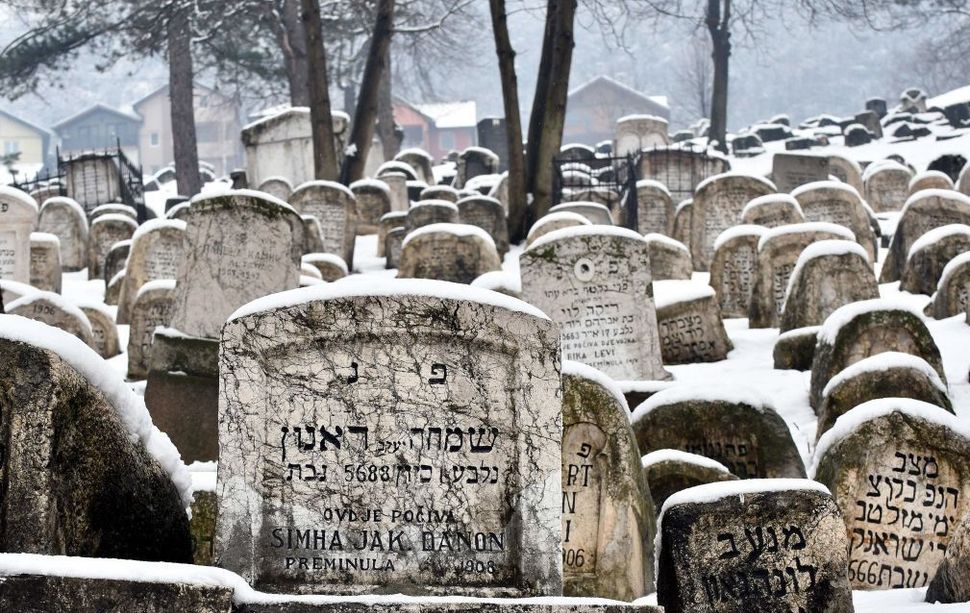 Old tombstones at the Jewish cemetery in Sarajevo. Image by Getty Images

The past year had been a really tough one for me. I experienced a frozen shoulder which lasted over six months, digestive symptoms only a GI doctor could listen to, multiple skin problems and — oh yeah — one of my front teeth suddenly came out unexpectedly while I was out of town. Also, I was tired all the time. But all this wasn’t particularly surprising to me; my mother had just passed away, and my body and soul were missing her in all kinds of ways.

Then the year finally passed. No more saying Mourner’s Kaddish. Would I now start to forget my mother, and was that what I was supposed to do? It was almost time for the unveiling ceremony and I didn’t know what to expect — so I did some research on its origin and meaning.

There is a biblical source for erecting a grave moment. Genesis (35:20) states: “On her grave, Jacob erected a monument, which to this very day is known as Rachel’s monument.” That monument, known as Rachel’s Tomb, is today one of Israel’s holiest sites and places of prayer. Of course, there are practical reasons for erecting a monument: family and friends will appreciate being able to locate the grave when they come to pay respects. There are also religious reasons for erecting a monument, one of them being so that the Kohanim (priestly tribe) will stay away from places where the dead are buried and hence avoid ritual impurity, as they are biblically commanded to do.

And there are more deep-rooted reasons. According to Professor Ya’akov S. Spiegel of Bar-Ilan University’s Talmud department, some argue that the monument serves as a memorial to the deceased, but that a righteous person is not in need of such a monument, as their words and deeds are their memorial. So, which is it — do we need the memorial or not? I certainly hope that it is not the case that all the monuments I see in the cemetery are for those whose deeds are not enough to memorialize them. We should know that the righteous do not require a monument to be remembered — but they should have one nevertheless. It seems that the graveside monument is built for both for the dead, as a memorial to their life, as well as for the living to know where the dead are located in time and space.

While not officially required by Jewish law, today’s unveiling ceremony is practically universal among all Jewish communities worldwide. Customs vary as to its timing. Here, in the United States, it is normally done within the first year after death. In Israel, it is done after the shloshim (30 days of mourning). No specific instructions are given as to size or type of monument and its inscription. Some have pictures and elaborate remembrances while others merely list the name and date of death.

The ceremony itself is short and simple: so different from most other Jewish ceremonies. There are almost no laws to observe. No rabbi is required to be present. Some may mistakenly read this as a sign of the ceremony’s minimal significance. But I think it is so important that set laws would not even suffice. Instead, it gives the mourners great discretion and leeway for creating their own personal meaning and for expressing their grief and hopes for consolation.

Any human being experiencing a loss can relate to this. What is particularly Jewish about the ritual is in its expression; the Hebrew inscriptions of the deceased name and date of death, Jewish symbols on the monument such as a menorah or Jewish star, and the reciting of the Kaddish (sanctifying G-d’s name). It publically establishes this person as part of the Jewish community forever.

By some coincidence, the date of my mother’s unveiling was taking place on the weekend of my birthday, which seemed totally appropriate to me. People like to say the dead person is not really gone, as they reside in the heart of their loved ones. But the monument reminded me of an unpleasant truth: My mother’s physical remains are in the ground. I vividly remember shoveling the earth myself into her grave during the funeral. And yet seeing the headstone with her name and date of death gives the loss a physical reality that my mind has been desperately trying to deny since her death. She is gone now, but she lived a life worth remembering; a life which is now etched in stone — in a matzava (headstone) — a “marker” of her life and of her resting place — now standing for all to see. I guess that has to be enough for now.