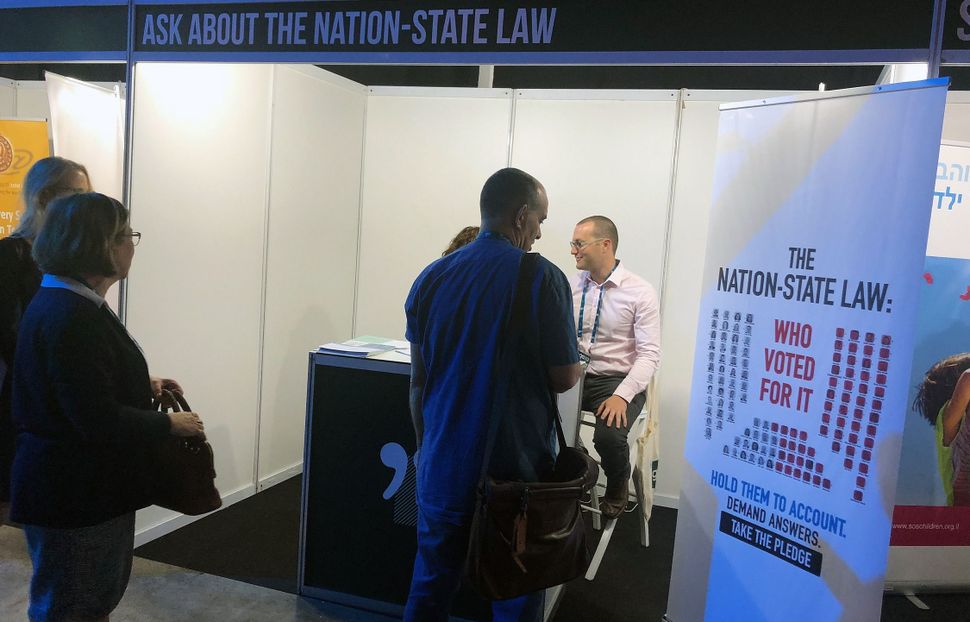 The first thing I noticed were the slogans painted in colorful letters on the walls and columns of the convention center. “Silence is Not Golden,” said one. “Keep the dialogue going,” said another one. “Don’t leave anything unsaid,” said a third. The Jewish Federations of North America’s General Assembly in Tel Aviv was plastered with a veritable pantheon of motivational quotations about dialogue.

But these quotes would ring hollow in the coming days. As the Israel Program Manager of T’ruah: The Rabbinic Call for Human Rights, I was at the GA, together with staff from the New Israel Fund and J Street, to operate a booth promoting awareness of the Nation-State Law. Although the law fundamentally shifts Israel’s relationship to its Palestinian citizens, and though Israel’s own president, Reuven Rivlin, has publicly opposed it, no discussion of the law was on offer anywhere in the GA’s packed three-day schedule. Yet it wasn’t just the Nation-State Law that was absent; there was absolutely no discussion of Israel’s 51-year-old military occupation of the West Bank, the ongoing siege of Gaza, or the fate of the two-state solution. T’ruah was even prohibited from putting our booklets about the occupation in convention-goers’ tote bags (despite our willingness to pay for the privilege of being official sponsors) or to organize a tour of the West Bank immediately before or after the conference.

The overwhelming focus of the GA seemed to be about maintaining a kind of vacuous goodwill reserved for rare family gatherings. Come, be nice, and don’t ruin dinner. That would probably work if this really were a family gathering, but it wasn’t: It was a gathering of powerful and influential North American Jewish and Israeli Jewish leaders who have a great deal of control over the lives and destinies of millions of disenfranchised Palestinians subject to military occupation in the West Bank and a crippling siege in Gaza, as well as 1.5 million Palestinian citizens of Israel who are increasingly concerned about the erosion of their civil rights.

And that was the true difficulty at the GA. On one level, it was a beautiful gathering. Jews from all over North America and Israel coming together to share ideas and initiatives that they care about. I really did feel like I was with my extended family, excitedly tracing lines of affinity with each new person by seeking discovering shared friends, and common programs, synagogues or schools that we attended.

But the exclusion of the occupation charged this family feeling with an undercurrent of artificiality. I felt that I was expected to feel happy, to get with the program, to not make a fuss. This expectation became difficult to maintain when I came across a booth run by the Jordan Valley Regional Council, showing off the dates and other produce grown there. The booth coordinator and I realized that we are both originally from California’s Bay Area, and even had gone to the same synagogue. As we were getting to know each other, I wondered what to do with what I knew about the human rights reports detailing how Israel, in an effort to secure as much land for settlements and future annexation, has made 85% of land in the Jordan Valley (much of which is in the occupied West Bank) off-limits to Palestinians. In an effort to curtail Palestinian development, the Israeli government has denied almost all building permits to Palestinian communities in the Jordan Valley and has denied even the most basic infrastructure to 10,000 Palestinians living in smaller rural communities there. So, the occupation wasn’t excluded from the GA, far from it. It was right at the center of things. It just wasn’t up for discussion.

I asked my new friend if she knew about any of these human rights reports. She told me that it did not match her experience. And thus we began a conversation that should have been the focus of the GA — a conversation about hard facts, about morality, about our most basic values.

Luckily, many people came to T’ruah’s booth with the questions that the plenary sessions so painstakingly excluded. What is happening in the occupied territories? Is it true that the Nation-State Law institutionalizes discrimination by making Jewish settlement “a national value”? Are ubiquitous Jewish settlements and national dominance necessary for Jewish survival, or are democracy and equal rights better guarantors of the Jewish future? Is the two-state solution still possible, and if not, what can democracy look like in this country that we care about so much? We went back and forth; we agreed about some things but disagreed about others. We had a true dialogue with participants, one that doesn’t keep any topic or question off the table for the sake of politeness or a shallow sense of community.

Many people who came to our booth said they didn’t have the vocabulary or the support needed to speak out about the occupation. But even silence sometimes speaks volumes. In his softball chat with the JFNA’s outgoing chairman in the final plenary session, Prime Minister Benjamin Netanyahu told the audience that the Israel Defense Forces would never leave the West Bank and that a sovereign Palestinian state would never emerge. “We won’t risk such a state for an op-ed in the New York Times,” he quipped, as if expecting an approving response. The room was silent. People looked at each other uneasily. Maybe it’s because they don’t find the idea of indefinitely dominating the lives of millions of disenfranchised people to be very funny. Neither do I.

To me, the GA underscored just how important it is for Israeli and Diaspora Jews to find the courage to speak out. They may be told by some communal leaders that they are ruining the atmosphere, that there are better, more private, less conspicuous ways for them to fight for what they believe. But the consequences of permanent occupation are too dire for both Israelis and Palestinians. Until we reach a just and peaceful resolution to the conflict, based on the democratic values that Israel and our community both claim to uphold, we must speak out about the occupation loudly and forcefully.