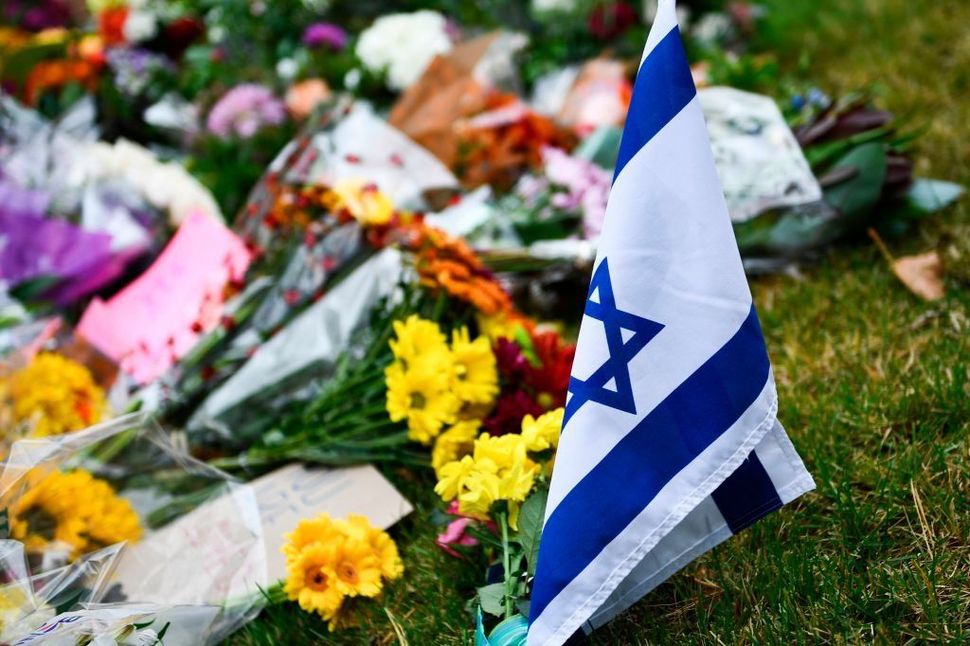 An Israeli national flag is seen at a memorial on October 28, 2018, down the road from the Tree of Life synagogue after a shooting there left 11 people dead in the Squirrel Hill neighborhood of Pittsburgh on October 27, 2018. Image by Getty Images

I just moved to Pittsburgh.

I’ve been checking out the congregations in my new city and went to a shul around the corner from Tree of Life Or L’Simcha a couple of weeks ago.

This attack, along with recent attacks against African Americans, immigrants and the transgender community have filled me with anger and grief.

A good dose of my rage right now is directed at the leaders of Jewish institutions who opportunistically aligned themselves with the Trump administration because they thought it was good for Israel. At leaders like Netanyahu who traffic in Soros conspiracy theories about migrants and stoke fear about ‘demographics.’

The Pittsburgh shooter regularly imbibed theories just like these on racist websites, theories which motivated his attack on Tree of Life Or L’Simcha. I’m outraged at the Jewish journalists who’ve been singing ‘both sides’ since 2016. I’m outraged at the federations working overtime to conflate BDS and anti-Semitism while brushing off the threat of the white supremacists who hold real political power.

I’m outraged at our leaders who thought it was more important to hate Palestinians than to advocate for Jewish lives. We don’t need ethnonationalism and endless occupation, more walls and racism to be free. We need each other — the freedom of Jews, Palestinians, trans people, people of color, immigrants and marginalized people everywhere are bound up with one another.

Tom Rosenberg is a filmmaker.