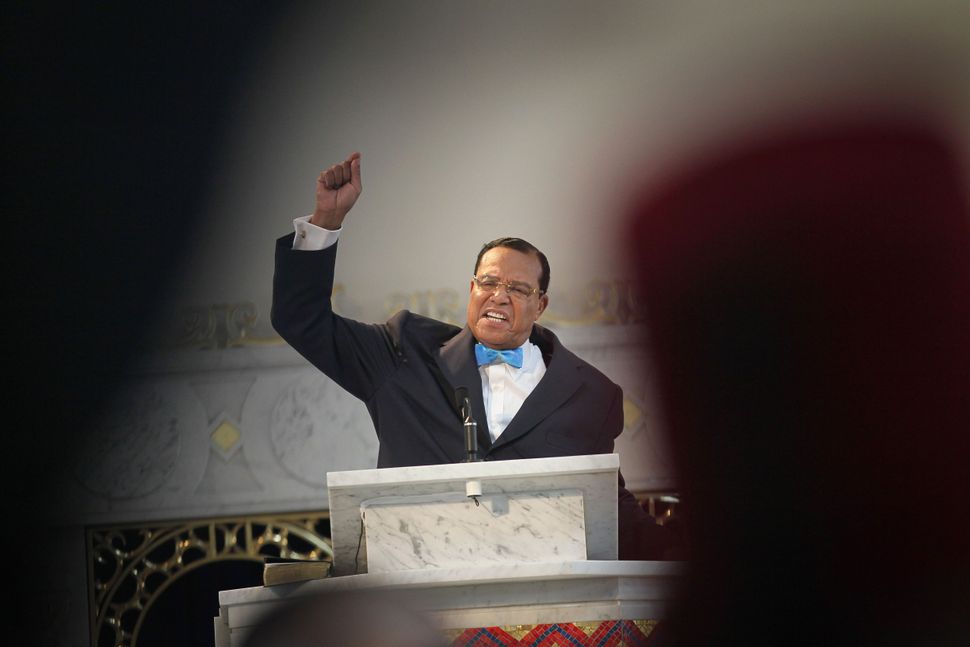 Minister Louis Farrakhan, leader of the Nation of Islam, gets a standing ovation from his followers as he makes a point while speaking at a press conference at Mosque Maryam on March 31, 2011 in Chicago, Illinois. During the press conference Farrakhan expressed support for Libyan leader Moammar Gadhafi and called for an immediate cease fire in Libya. Image by Getty Images

There are still two million fewer Jews alive today than there were in 1939.

In the last several years, Jews have experienced mass shootings in Paris, Mumbai, Copenhagen, Belgium and Tolouse. And of course, the white supremacists in Charlottesville chanted loud and clear that “Jews will not replace us.”

Yet even though anti-Semitism is unmistakably at the core of the far right, Jewish concerns are often dismissed as being insignificant compared to the threat white nationalists pose to other minority groups.

Social justice movements are deeply rooted in combatting racism, Islamophobia, homophobia, transphobia, sexism and misogyny. But when it comes to anti-Semitism — the very hate that fuels white supremacy — it doesn’t receive the same attention.

In progressive movements, Jews are often considered less of a priority to intersectional activism than other minorities are.

The reality is that anti-Semitism only garners serious attention when it’s of the most extreme magnitude. But the shooting in Pittsburgh didn’t occur in a vacuum.

In the last year alone, there have been 1,986 reported incidents of anti-Semitism, a 57% percent rise from the previous year, which is the largest single increase since the Anti Defamation League started tracking hate crimes in 1979. Despite the recent surge, most of us didn’t take notice until the tragic shooting at Tree of Life Synagogue. In Pittsburgh alone, there have been 50 recorded incidents of anti-Semitism since last January.

While there is some scrutiny over the ADL’s presentation of statistics (for instance, physical attacks on Jews have declined from 37 to 19 last year), the surge in reported harassment and vandalism speak to the more vulnerable climate American Jews find ourselves in now.

There’s not a single reason for the rise in hate crimes, but our political atmosphere has helped prejudice rise to the surface.

Trump’s consistent references to George Soros controlling the Democratic Party and his obsession with the word “globalist”— a word historically coded to mean “Jews” —have created a political atmosphere where anti-Semitism is normalized.

But it’s not just the right that traffics in casual anti-Semitism. There’s a surprising amount of tolerance in left-leaning spaces for blatant forms of anti-Semitism, too. Most recently, the organizers of the Women’s March have been criticized for associating with and defending Louis Farrakhan, who has likened Jews to termites and has praised Hitler. Linda Sarsour, who co-founded the Women’s March, has also worked closely with convicted terrorist Rasmea Odeh, who assisted in the murder of two Jewish students in a 1969 Jerusalem supermarket bombing.

And then there’s Jeremey Corbyn — the leader of the British Labour Party (and potential next Prime Minister) who has a long history of associating with Holocaust deniers and with terrorist groups like Hamas and Hezbollah.

The instances of anti-Semitism in American politics in 2018 alone have been exhaustive.

There was DC Council Member Trayon White, who preposterously claimed that the Rothschild family controls the weather.

There was Representative Matt Gaetz of Florida who invited a Holocaust denier to be his guest at the State of the Union.

And just this week, news broke that Republican candidate Ed Charamut sent out a campaign mailer of his opponent Matthew Lesser, a Jewish Democrat, clutching a fistful of money with a deranged look in his eyes. This stoked overt anti-semitic tropes of possessive Jewish greed similar to a tweet sent out by President Trump in 2016.

For so long, Jews have been told that we’re not a marginalized community. This is because most Jews do not face overt prejudice based on physical appearance. Most Jews are not the target of US travel bans or bans on who can serve in the military. White Jews don’t have to worry about police brutality. We don’t experience casting bias in movies or employment discrimination the way other minorities do.

With all this societal privilege, it’s easy to understand why so many think that American Jewish suffering is a thing of the past.

But privilege and whiteness don’t shield one from the anti-Semitism of white supremacists nor from those on the far left. In fact, economic privilege often fuels conspiracy theories that Jews control the government and major industries in the world.

Jews have always faced an elevated threat of hate crimes, yet anti-Semitic rhetoric is rarely taken seriously in public discourse.

It shouldn’t take the deadliest mass shooting against the American Jewish community to awaken so many people to the reality of anti-Semitism. Yet even in the days following the massacre, Columbia University released a statement that neither mentioned Jews nor anti-Semitism, but rather spoke to the rise in mass shootings in more general terms.

Animus towards Jews isn’t always as obvious as what occurred in Pittsburgh. But it is insidious and pervasive — and needs to be addressed wherever it lurks.

This isn’t an issue of left and right. It’s an issue of right and wrong. If we want to see change, we must call out anti-Semitism — especially when it’s from within our own party.