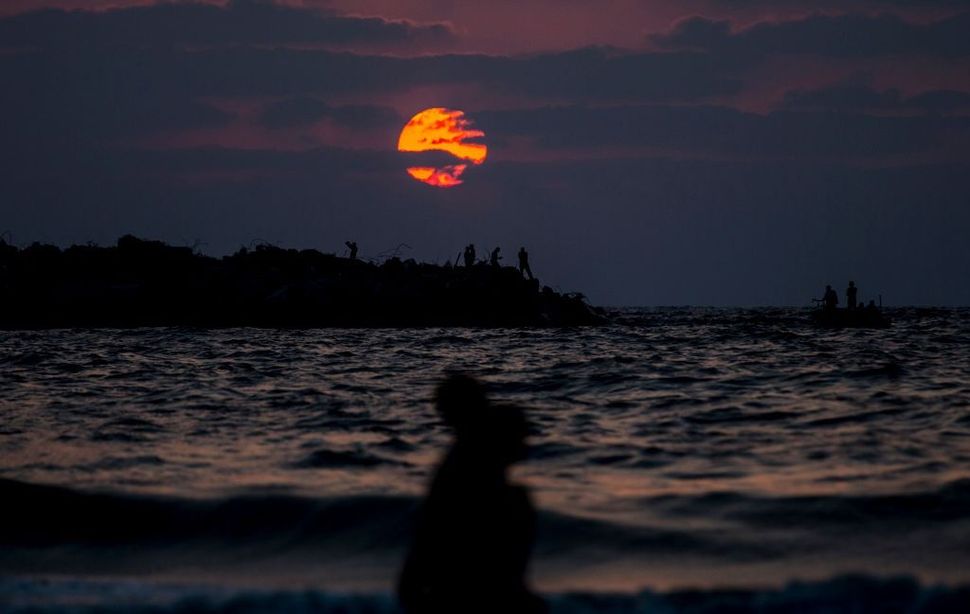 Palestinians walk by the beach as others in the background stand by the rocky coast off Gaza City at sunset on July 23, 2017. Image by Getty Images

Unlike most Palestinians living under Israeli military occupation, I could pick up and leave at a moment’s notice. Still, I stay, even as President Trump wreaks havoc on us.

An American friend asked, “Why?”

Why do I stay, now that both my daughters have left Palestine? Why not return to Ohio, where I was born? His questions made me reflect. I certainly do not feel obliged, as Captain Smith did, to go down with the Titanic. Nor do I feel like a Don Quixote, nobly tilting at windmills. It’s much simpler.

I stay because I feel at home.

Of course, I have a political answer, too.

President Trump’s much-ballyhooed “Deal of the Century” is due soon — a deal people here already call Balfour Declaration 2.0, in reference to the British government’s promise of a national home for Jews in Palestine following WWI. The Trump administration seems hell-bent on dictating terms of unconditional surrender, ending our long struggle for freedom and independence. The trajectory of the last two decades, coupled with Trump’s presidency, is obvious: bring Palestine to its knees!

But that would be seeing the glass half empty.

It is half full, too.

Born in Youngstown, Ohio to a Muslim Palestinian father and a Christian Lebanese-American mother, I frequently joke that I feel like a happy Jew. That is, I wholeheartedly embrace all of my hyphenated identities. I see strength in diversity. I feel it in myself (being both American and Palestinian) and in my surroundings. Diversity thrives here in Palestine…maybe even more than in the US.

That’s one reason to stay: To nourish and be nourished by difference.

I also live in my father’s hometown of Al-Bireh, a sister city of Ramallah, north of Jerusalem. If I were younger and living in Gaza (where unemployment for youth is 70% and the living conditions are horrendous), I’m not sure I’d have the wherewithal to stay. For all intents and purposes, living in the West Bank, in cities like Al-Bireh, Ramallah, Jerusalem, Bethlehem, Hebron and Nablus, is not much different than living in economically-depressed Youngstown, apart from the military occupation. It’s as cosmopolitan as many cities around the world, albeit smaller, “cozier.”

That’s another reason I stay: to consume the culture and savor the spices of Mideast life.

Still, I’m frequently asked by young people to help them immigrate to the US.

I just smile and say they’re asking the wrong person.

I left America to contribute to the building of a state in Palestine. I don’t belittle their desire to leave, of course: life under military occupation is no picnic.

Still, I know that most won’t be able to leave. Thus, I dedicate myself to the youth, developing Palestine’s economy so they can find dignified employment and stay in Palestine. Good jobs offer hope and peace of mind, allowing us to resist the Israeli occupation non-violently.

So, helping future generations is yet another reason I stay.

My two daughters, Areen and Nadine, are proud products of Palestinian society. They grew up within its education system. They’re now products of MIT (Chemical Engineering for Areen) and Harvard (Nadine is still exploring her options). Not too shabby for young ladies reared in a “backward” community. Nevertheless, they maintain their humility.

Israeli smear campaigns will not change the fact that they were not taught to hate.

Instead, they were taught to cherish “life, liberty and the pursuit of happiness”…values common to both Palestine and America. They are testaments to Palestinians’ will to excel, despite all obstacles. I encourage them to use their hard-won skills to serve noble causes, to know the rewards of commitment, and to embrace purposeful personal sacrifice, as I have.

Being a role model for them is another reason I stay.

I might very well reach a point one day where it no longer makes sense to stay. I may cash in my chips then. Even so, Palestinians will not vanish. Nor will they accept (as my Israeli friend Jeff Halper quipped) being “warehoused” forever.

Whether I stay or go, Palestinians are not alone. The majority of the world’s people now support their struggle for statehood.

In fact, less than a dozen countries (Israel, of course, the US, Canada, Panama, the Czech Republic, and the minuscule superpowers of Micronesia, Nauru, Palou and the Marshall Islands, to name a few) stand in the way of the state we were promised 70 years ago.

Knowing we are so close to statehood, after seas of blood, sweat, and tears have been spilled, is yet another reason I stay.

Palestinians know sumud (steadfastness). Like the New England Patriots in Super Bowl 51, we press on, no matter the odds

So, I also stay to coach Team Palestine to ultimate victory — despite knowing that not all struggles for self-determination, however just, succeed.

Even the fiercest Native Americans, the Comanches, eventually surrendered to superior forces and to the arc of history. Yet consider what the US saw fit to do eventually for the first Americans, despite the historic wrong perpetrated on them — granting them full citizenship, tribal sovereignty, freedom of movement, affirmative admission to top-tier universities, and so forth.

Now, 107 years after the death of Comanche chief Quanah Parker, has Israel done anything for Palestinians in any way similar? Does Israel teach about the Nakba, in which more than 700,000 Palestinian Arabs — about half of Palestine’s Arab population — were killed or displaced, and over 400 villages were destroyed during Israel’s establishment?

Ultimately, in terms of how this conflict will ultimately be resolved, my personal presence or absence here is an insignificant detail.

In sum (and sumud!), I stay to encourage Israelis to “do the right thing” sooner rather than later. Otherwise, they will one day rue, when an independent Palestine finally emerges from the ashes of 1948.