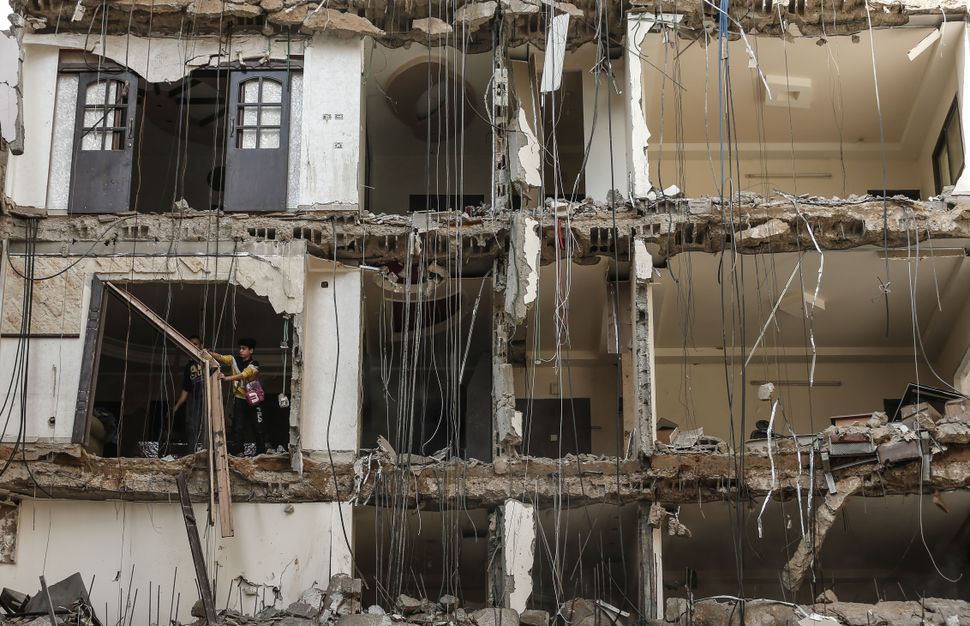 Once again, Israel and Gaza seemed on the brink of war. And once again, a delicate ceasefire has been reached.

And yet, while it’s a relief not to be at war, there is a sense of the return of the awful same. Leaders on both sides are desperately trying to impress their constituents by exploiting the other side’s pain.

A senior Israeli Air Force officer boasted on Tuesday morning that Monday’s airstrikes were “completely different from anything we’ve known in the past.” And the Israeli Defense Forces boasted in a tweet about hitting a TV station “in the heart of the city”:

I’m just very confused as to why @idfonline is bragging about blowing up a TV station, and one “that’s located in the heart of the city” per the accompanying caption. Who is this meant to impress? https://t.co/kTkBVkneaj

Not to be outdone, the Spokesperson of the Islamic Jihad similarly boasted about introducing new, “more powerful” rockets.

With all of the machismo and vitriol, neither side wanted to unleash a full-scale war. The whole purpose of the show was to satisfy popular anger through increasingly violent flexes of firepower.

Both sides have opted to maintain a provocative and competitively violent stand off, sustained by demands for blood from the Israeli right-wing and Hamas.

The Israeli attacks were mainly designed to strike fear in the hearts of Gazans rather than to obliterate Hamas. Similarly, Hamas’ projectiles were designed to make the Israeli leadership cry uncle, and be the first to stop its bombing campaign.

The Israeli Coordinator of the Government Activities in the Territories attempted to tweet Gazans into passivity by recalling past horrors from earlier violent events. “Gazan Residents,” he wrote in Arabic. “Have a good look at those images, taken from the 2014 Operation Protective Edge: a picture that is worth a thousand words.”

Al-Qassam Spokesperson Abu Ubaida, tweeted a similarly horrendous message that “about one million Zionist will be in our range of targets if the enemy’s decision is to go further with this assault.” He did not bother to post it in Hebrew.

This outrageous disregard of human lives and exploitation of human suffering is indefensible. Why should civilian populations pay the price for the arrogance and recklessness of well-protected leadership?

Every single person I know in Gaza was wholeheartedly against the last purposeless and inexcusable surge of violence, and I’m sure most civilians in Israel’s south were as well.

Yet for as long as there remain several groups demanding more violence, protesting the cease-fire and cheering the other side’s agony, the never-ending cycle of tragedy will continue.

Today, in a desperate attempt to appease the pro-violence camp in Israel, Defense Minister Avigdor Lieberman resigned, condemning Netanyahu’s “weakness” in Gaza. It was a move made with the next election cycle in mind, and will only fuel the intractable cycle of bloodshed and violence.

If we tear down the platform for hateful rhetoric, then violence will be genuinely disincentivized.

At this moment of vulnerability, we should feel each other’s pain as we desperately try to make our way in life after decades of darkness and hatred. We should pray that there will be no war, but just as importantly, we should demand an end to terrorizing civilians.

We should work towards one another’s safety and happiness, not toward each other’s suffering and death.