My four-page prize possession: an appreciation of the Novominsker Rebbe 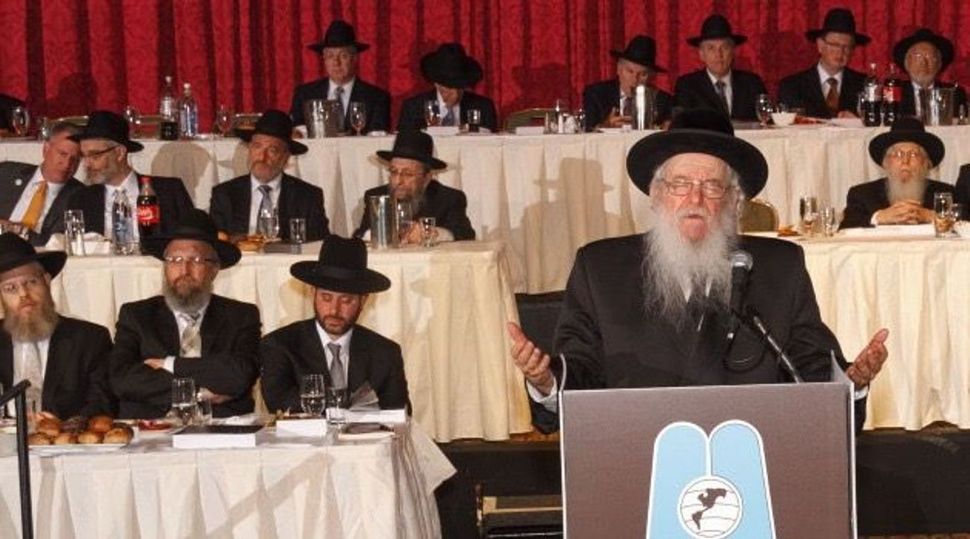 When I went to bed on April 6, my mind was on the next day’s planned kashering of a kitchen sink and then that evening’s ritual search for chametz.

When I awoke early the next morning, all of that was brutally pushed from my mind by the news of the Novominsker Rebbe’s unanticipated death.

Mere days earlier, the Rebbe, Rabbi Yaakov Perlow, had issued a heartfelt plea for all Jews to heed medical authorities’ directives during the coronavirus crisis. And now, plans were being made for his final honor, a Jewish burial, in the presence of only a handful of people, amply spaced. Under normal circumstances, many thousands would have participated in the funeral of so respected a Jewish leader.

Although he may not have known it, the Rebbe was something of a father figure to me. I didn’t interact with him to the extent of some others at Agudath Israel, on whose highest rabbinical body, the Council of Torah Sages, he served. But the interactions we had over the more than quarter-century of my serving as the organization’s spokesperson were memorable, as were his wisdom and eloquence when he addressed the crowds at the organization’s dinners and conventions. And I had grown to feel very close to him.

When the shock-daze began to dissipate, I was transported back to 1986.

That year’s December issue of The Jewish Observer — the late, lamented periodical that Agudath Israel of America published from 1963 until 2009 — carried an article written by a thirty-something high school religious studies and Jewish history teacher in Providence, Rhode Island: me. The essay proved very controversial in some Orthodox circles and Rabbi Perlow strongly criticized it in a subsequent issue of the magazine.

The topic of the article isn’t important (okay, it was about Moses Mendelssohn; some felt that I had treated him too delicately) but the brouhaha was considerable. I had my defenders, including some respected rabbis, but several members of the Council of Torah Sages felt that the magazine should not have published my piece. The periodical publicly expressed regret for having done so and prominently featured the Rebbe’s critique.

I have two bulging notebooks filled with letters I or the magazine had received at the time and that I had sorted. One holds missives from people who had judged my article the best thing since sliced pastrami; the other from those who felt it had been a crime. One of the latter bunch, presaging what would come to be known decades later as Godwin’s law, asked if I was planning to rehabilitate Hitler next.

A third folder, though, one of my most prized possessions, contains the responses I received from members of the Council of Torah Sages. I had written them to complain, politely but pointedly, about their position.

Among them is a four-page, handwritten letter from Rabbi Perlow, detailing his objections to what I had written and assuring me that nothing personal was intended by his public criticism of my article.

I could have taken the reproach as a personal insult. Another Orthodox writer, when things he wrote were criticized by some rabbinic leaders, did just that, responding with antipathy toward his critics and letting a thin skin prevent him from thereafter contributing his talents to the mainstream Orthodox world.

But I knew something important that the writer apparently wasn’t ready to consider. We might think that great men are mistaken but not only can we be wrong, even if we’re convinced that we’re right, those luminaries are still no less great, no less worthy of our veneration.

Judaism has no equivalent to the Catholic doctrine of papal infallibility. There is an entire tractate of the Talmud, Horiut, predicated on the assumption that even members of the ancient Sanhedrin were capable of erring, even in halachic matters.

But it is nonetheless a principle of Jewish thought that those most imbued with Torah-knowledge and who have internalized a large degree of the perfection of values and refinement of character that the Torah idealizes are thereby rendered most qualified to offer an authentic Jewish perspective on matters of import to Jews. Expert doctors, too, even if they are fallible, as they must be, are still the most qualified people to offer medical advice.

So I chose to hold my peace and to be honored that the Rebbe had even responded to someone half his age and lacking his learning and life experience.

In any event, I can’t truly know whether my article had been on-target or hopelessly off the mark. I really don’t care at this point; Mendelssohn’s legacy isn’t exactly a hot topic these days. But, despite my feelings at the time, I respected the Rebbe and his opinion, rightly so.

And so, back then in 1986, I went on with my life, which revolved around my growing family and the young men and women I was privileged to teach. I wondered, though, if the Rebbe might have taken my letter, in which I questioned the objections to my article, as itself objectionable.

I found out a few years later when Rabbi Moshe Sherer, the legendary Agudath Israel leader — who was famously beholden to the Council of Torah Sages — reached out to offer me a position in the organization.

In his letter responding to mine, Rabbi Perlow had ended by expressing the hope that we might meet in person one day.

We did, many times, to my great honor and benefit.

He was a man of unwavering principle and great kindness. May his memory be a blessing for all the Jewish people.

My four-page prize possession: an appreciation of the Novominsker Rebbe