The loss of the Novominsker Rebbe, Rabbi Yaakov Perlow, leaves a gaping hole in our community 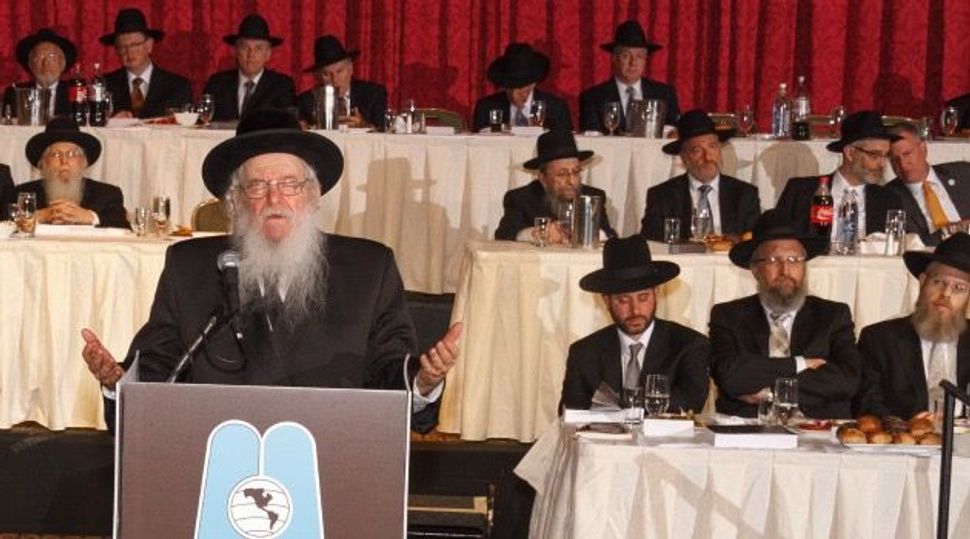 I will not write about Rabbi Yaakov Perlow, the Novominsker Rebbe, who passed away suddenly this morning. I will not write about him because I simply cannot, for several reasons. First of all, my personal interactions with him were limited, to just a handful of private conversations. But more importantly, to describe him accurately would be to understand him, and I cannot claim to comprehend this man who epitomized greatness. What the 14th century rabbi Nissim of Gerona wrote about God Himself is apt here: “If I understood Him, I would be Him.”

I saw one publication try (and fail) to capture who the Novominsker was by writing that he was “known for his rhetorical skills and was the keynote speaker for many years at Agudas Yisrael and Torah Umesorah gatherings.” It’s certainly true that he was a masterful orator in both Yiddish and English; crowds would hang on his every word as he spoke. But that is hardly what defined him, just as he indeed succeeded his father as Novominsker Rebbe in 1976, and yet, he wasn’t only a Rebbe, with all that entails.

It is also true that he was the Yoshev Rosh, or president, of Agudath Israel of America since 1998, as well as a member of their Council of Torah Sages, while also serving on Torah Umesorah’s Board of Yeshiva Heads. But that, too, is not all he was.

The Yeshiva, Kol Yehudah, colloquially known as “Novominsk,” which he founded in 1981 and stood at the helm of all these years is one of Jewry’s crown jewels. But he did not limit himself to just that. He also served as a rabbi in a shul in Boro Park, and authored many scholarly works of Torah.

Still, none of that even begins to touch the impact of his passing. It’s that gaping void which can best help people appreciate who he was.

Take me, for example. I am not a member of any of the organizations he served at the head of. I did not study in his yeshiva and I did not pray in his shul. Still, for me, and so many people like me, the news of his passing hit like the proverbial punch in the gut.

I think it’s precisely because of this that his passing is so hard to deal with. He was undoubtedly busier than anyone I know, and I had no personal relationship with him. But when, a little over a year ago, I had an issue I needed to discuss with someone much wiser than myself, he was the natural choice. I made a trip into Brooklyn to speak with him. And he sat with me — a total stranger — and gave me all the time in the world, just to help me gain clarity and peace of mind.

At that moment, I was not alone. And I never was, because I knew I could always speak with one of the wisest men I’ve ever known.

Because to him, we weren’t strangers. He had a special mission in life: to lead. And true leaders — and he was one — understand that you don’t just lead movements or organizations; you lead people.

And we, the people, knew we had him as leader.

Two things come to mind as I write these words. Just hours before his passing, he wrote the text of a letter from the Moetzes Gedolei HaTorah, the Council of Torah Sages, with a special message for American Jewry in the days before a Passover under coronavirus. He had penned two earlier messages in March letters, as well as recording a video message.

“We cannot behave the way we did last week or two weeks ago. We’re told that the halacha (Jewish law) that we must listen to doctors, whether it’s about a sick person or Yom Kippur” pic.twitter.com/XUO4djPp8M

“The state of our fellow Jews weighs heavily upon us,” he wrote in Hebrew. “Whether it is those who have passed away, and their mourning families; those who are ill, in need of Heavenly mercy for their recovery; those who are enduring economic hardship in this global economic crisis; or our brothers and sisters who will be in quarantine alone this Pesach: We must all follow in the footsteps of Avrohom Avinu to do them kindness and to help them. We are exceedingly grateful to all who are giving of themselves to take care of the needs of their brethren. May Hashem’s blessings rest upon them.

“Beloved brothers,” he went on. “It is specifically at this time, specifically now, that we have the obligation to strengthen in unity, like one person with one heart, to declare with conviction to ourselves that we are going out now, like we do each generation, from the servitude of Mitzrayim to everlasting freedom. Freedom of the spirit — to learn Torah and perform mitzvos; freedom to honor Hashem and to do kindness to others — the entire purpose of our life; freedom to know and fear Hashem — the hallmark and hope of all creation.”

And that was the central message I got from him, and the message he delivered just 97 days ago when he spoke before the close to 100,000 people who filled Metlife Stadium for the Siyum HaShas. It was a simpler time, before viruses and social distancing, when all we worried about was the rising tide of anti-Semitism.

Speaking about that, the Novominsker reminded everyone that “the secret of the survival of the Jewish people is the Torah. The Torah is not only a treasury of knowledge of Hakadosh Baruch Hu’s wisdom, it is also a challenge of behavior.”

Especially now, his message, delivered so consistently both in words and in actions over his decades in leadership, rings true. In this new and frightening world, we have none of the usual support rails to rely on anymore — including him — beyond the Torah itself.

A rabbi of mine, himself now hospitalized with COVID-19, in a phone conversation just days before he was admitted, told me that he’s been thinking a lot about the words of Nachmanides in explaining why God tells us that He will respond to the outcry of the orphan and the widow as soon as they call out to Him. Nachmanides explains that people always feel they can rely on others to protect them. But truly, they have nobody to turn to but God.

I’m thinking about those words a lot now myself.

Rabbi Yaakov Perlow was too great for simple people like me to really appreciate who he was. But now that he is gone, we can certainly feel what we are missing.

The loss of the Novominsker Rebbe, Rabbi Yaakov Perlow, leaves a gaping hole in our community